St. Albert's Christmas Bird Count has been cancelled, but there's a replacement for kids. That, and more, in Environment File.
Dec 1, 2019 9:00 AM By: Kevin Ma 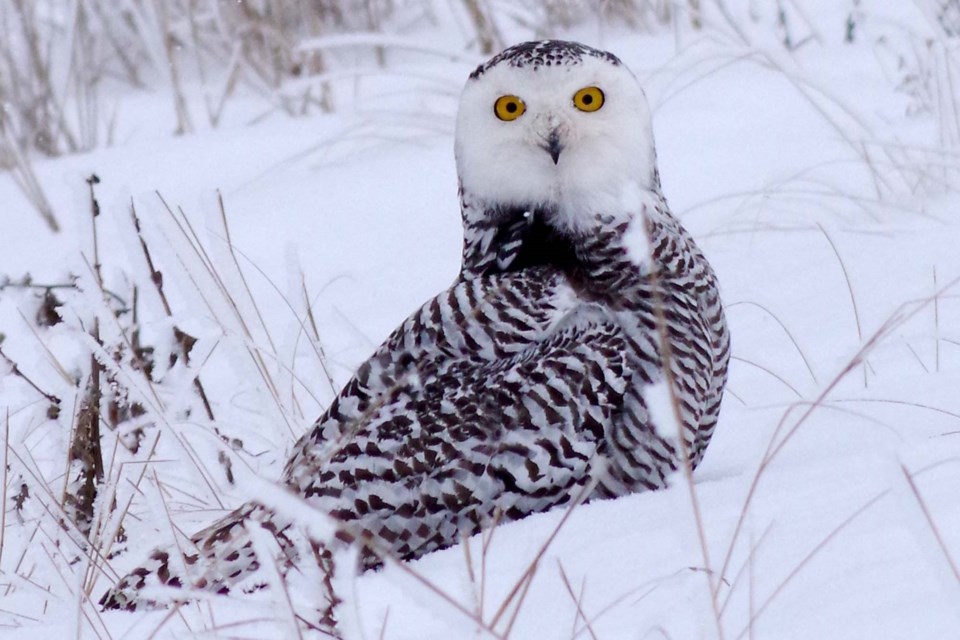 CANCELLED?! – Birds such as this snowy owl spotted last year near Ray Gibbon Drive will go uncounted this Christmas now that the St. Albert Christmas Bird Count has been cancelled. It's the first time in 28 years that the count will not go ahead.

St. Albert’s Christmas Bird Count has been cancelled for the first time in history, and it might be gone for good.

St. Albert Christmas Bird Count co-ordinator Alan Hingston told the Gazette this week he is unable to run this year’s count due to ongoing family matters that require frequent trips overseas, and has not been able to find someone else able to take up the job.

“All I can say is I will not be organizing a count this year,” he said, adding by email he doubted he’d organize one next year, having missed this one.

Unless someone steps up to run the event, the St. Albert count is effectively cancelled.

The St. Albert count typically saw over 100 people head out on or around Dec. 28 to count every bird they could find in 24 hours in a 24-km-wide circle centred on the old St. Albert Airport. Data from the count was forwarded to Bird Studies Canada to track trends in bird populations.

Hingston said the count has happened each year since 1991, first under the leadership of Peter Demulder until around 2003, Dave Nadeau until 2006, and himself thereafter. Counters have logged some 78 unique species in that time and observed significant shifts in bird populations, such as the steady rise in ravens and the invasion of the house finch (first spotted in 2006).

Birder Dan Stoker said he had taken part in the count for as long as he could remember, but isn’t in a position to run it.

“It was fun,” he said of the event, and he could recall spotting rarities during it such as the golden crowned kinglet and boreal owl (spotted exactly once in the count’s history).

Stoker said it’s been tougher and tougher to round up birders in recent years, and new technologies such as eBird are offering alternative ways to track bird numbers.

“I think (the count) maybe has had its time.”

Edmonton’s Christmas Bird Count is still set to go ahead on Dec. 15.

St. Albert will have a bird count of sorts this Christmas – it’ll just be for kids.

The Big Lake Environment Support Society has teamed up with Nature Kids to hold a free Christmas Bird Count for Kids event this Dec. 14 at Lois Hole Centennial Provincial Park from 9 to 11 a.m. About 40 people are expected to attend.

Nature Kids program co-ordinator Zoe MacDougall (who was unaware that the regular bird count had been cancelled) said this event is meant to encourage youths to get out into Important Bird Areas such as Big Lake.

Kids will work with local birders to do a bird count at the lake, the data from which will be submitted to Bird Studies Canada.

“We’ll have a little nature walk around the boardwalk,” she said, and the kids will do a craft.

MacDougall encourages guests to bring binoculars and bird guides to the shelter by the park’s boardwalk and to pre-register by emailing [email protected]. See naturecanada.ca/enjoy-nature/your-naturehood for details.

St. Albert should use development fees to help it live up to its legal obligations to protect biodiversity, says a St. Albert law professor.

“We’re grappling with what it means to be living in the sixth great extinction,” Jefferies said, referring to the unprecedented rate at which species are disappearing from Earth, and he wanted to see how local governments could help address it.

Recent changes to the Municipal Government Act for the first time create a legal obligation for local governments to protect the environment and offer them new powers to do so, Jefferies said. The province has not, however, brought in new cash to help cities meet these obligations.

Cities such as Toronto have enhanced biodiversity by requiring green roofs on certain buildings, while the M.D. of Bighorn has allowed developers to build more intensely in some areas in exchange for protecting others through transferable development credits, the study noted. St. Albert was also making strides by setting a tree canopy target and protecting natural areas such as the white spruce forest.

Jefferies said St. Albert should consider development fees or green bonds to meet its conservation obligations, and should revisit the idea of a private tree law, as trees on private land are an important part of the tree canopy. (Council last considered a private tree law in 2007.)

Jefferies said he hopes this study would encourage governments and landowners to come up with innovative ways to protect biodiversity.

The study can be found at bit.ly/2KYhxHh.