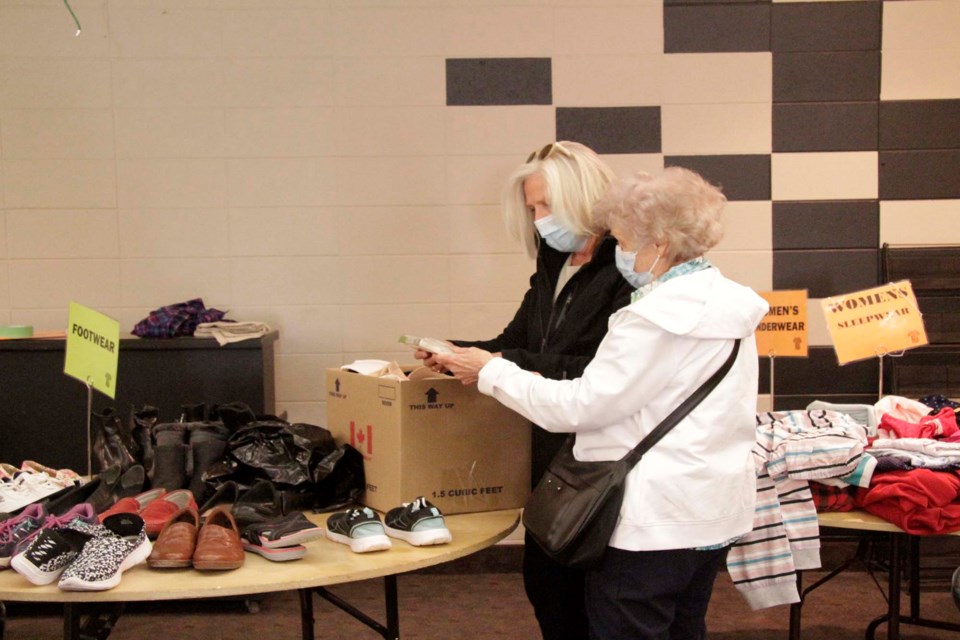 Donna Benson and her daughter Laurel Macphail pick out a few necessities for Donna at the St. Albert Alliance Church after she had to leave everything behind due to the fire at the Citadel Mews West seniors complex, May 9. PHOTO/St. Albert Gazette

Most of the good work the St. Albert Alliance Church was able to offer displaced Citadel Mews residents escaping the fire on Thursday night was simply in just being there, being ready, and having a big room just in case.

The church joined Good Samaritans across the city in coming together to help victims of the fire. Pastor Mike Sotski explained that the Villeneuve Road church’s first response was to connect with emergency services as they co-ordinated the evacuees.

“We put in a request to possibly be a staging spot for seniors. We opened the church for that on Thursday evening, but didn't receive any seniors because they had a plan to get all the way down into the St. Albert Inn. Obviously, that worked great,” he offered.

“Our staff team gathered together on the Thursday night and got out coffee and water and set up tables and that kind of stuff. If it was needed, that would have been a great asset, but it wasn't needed. That's awesome. We don't feel discouraged by doing that. It's just that willingness as a church in the staff to try and make it happen and serve our community in some way.”

That’s when the church switched its main concern to offer comfort and support in any way. It has a sizeable auditorium space for its services, though the building is in the final months of a massive construction project.

The view, he said, was that many seniors had nothing with them. In pre-pandemic days, that auditorium would frequently be rented out by the public for large special events, such as school Christmas concerts and volunteer awards ceremonies. The church also held a community clothing swap called Share and Wear, the format for which also became useful to the displaced Citadel seniors.

Knowing how caring a community St. Albert is, one where everybody steps up to pitch in and help out in emergencies such as this, Sotski said he and the other church leaders considered another way to help that would also rely on the church’s expertise in handling and distributing clothing donations.

“We could serve as a conduit for some of that stuff. This was just us kicking into some of our old infrastructure and rallying a team around it and making it happen,” he said.

“It would be a great spot for that kind of stuff to happen. It's one of the things that we wanted. We want it to be a place that is needed by the community, but also used by the community in a number of ways, especially when we get into our new building here in a couple of months.”

Prior to the construction project, the St. Albert Alliance Church had been in contact with the city as a possible emergency-response facility because of its size and the energetic volunteer force of its congregation.

Over the weekend, the church organized more than 45 of its volunteers (all working in shifts and with appropriate physical distancing, Sotski noted) to collect clothing, bedding, toiletries, and several thousand dollars in gift cards. They then sorted them and then had them distributed mostly through the Christenson Group of Companies, operators of two of the three buildings in the Citadel complex, including the west building, which was destroyed in the fire.

About 15 seniors and their families were able to come and pick through everything to obtain any items they needed.

Brian Farrell, chief executive officer at Christenson Group of Companies, expressed his deep appreciation to everyone who offered a helping hand in whatever way they could.

“It's been unbelievable: the outpouring that we've had from all stages of community,” he began, listing off the church, senior groups, businesses from the community, and even competitors who came forward. Companies have offered their services or products for free to fire victims – eyeglasses, dentures, pizza, and more – and residents in St. Albert and beyond have donated goods and funds to support the seniors' re-establishment elsewhere.

He added further praise to the teenagers who helped evacuate the seniors, as well as the many other people who stepped in that night to make sure residents got out safely.

“I've never quite been involved with anything where there's so many people that want to help. It's been unbelievable. I can't thank the community enough. I can't thank our staff enough. I can't thank the passers-by (enough). There was those three kids who made the news, but I can tell you for a fact that was more than just three teenagers who jumped in and helped. There was probably another 15 or 20 people that saw the place was on fire ... former employees. There's just ... there's so many people to thank. I just call this a miracle.”

The public has since been asked to withhold future donations of physical items and encouraged to make financial donations to the Canadian Red Cross through its Canadian Disaster Relief Fund in support of "disaster preparedness and response in Canada."

The City of St. Albert has confirmed a plan to establish an authorized donation option with the Red Cross for those who wish to continue to offer support to the displaced Citadel Mews residents. No announcement has yet been made that the fund is live.

A representative of Red Cross stated in an email that the organization is in contact with the City of St. Albert and Citadel Mews and "remains ready to support if needed."

If people would like to support the ongoing work of the Canadian Red Cross, they can donate to the Canadian Disaster Relief Fund online at redcross.ca or by calling 1-800-418-1111. Money raised helps support disaster preparedness and response in Canada.

Sotski said the Alliance Church is always ready, too.

"Our heart desires to be for our community and with our community, so to be able to offer a space and a team to help facilitate meeting needs was just awesome, especially in the season that has been really hard with COVID and isolation and people having to keep a distance. Just a way to practically serve and love people in our community that are dealing with a tragic loss was fantastic and it was really encouraging to be able to be a part of that."