A St. Albert man is in hospital suffering smoke inhalation and some burns after firefighters rescued him from an apartment fire in Inglewood on Sunday. Firefighters responded to a call at 3:47 p.m.
0
Mar 20, 2018 1:10 PM By: Jennifer Henderson 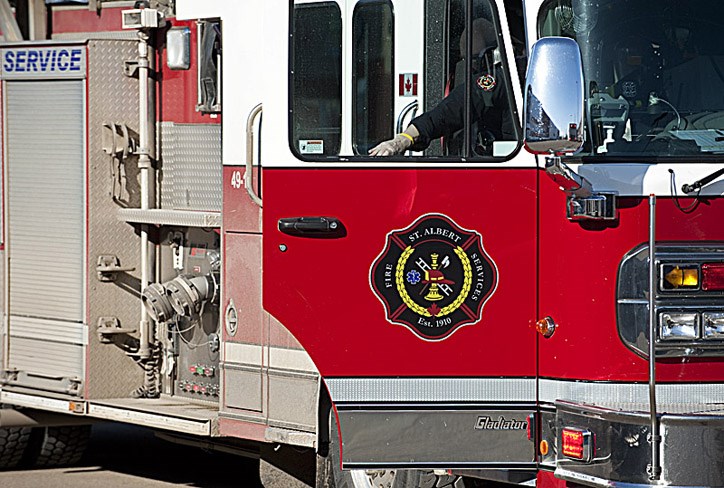 Firetruck on a call in St. Albert.

A St. Albert man is in hospital suffering smoke inhalation and some burns after firefighters rescued him from an apartment fire in Inglewood on Sunday.

Firefighters responded to a call at 3:47 p.m. after a cigarette ignited a couch in one of the suites at 44 Inglewood Drive at the Sierras of Inglewood building.

Fire services arrived on the scene seven minutes later and were surprised to find a 66-year-old man, who lived in the unit, was still inside the suite.

St. Albert Fire Chief Keven Lefebvre said that the man was conscious when the fire department arrived and was brought out of the building by the firefighters.

“He didn’t appreciate the risk,” Lefebvre said. “There was a lot of smoke in there and it surprised the firefighters that he was still in there with the amount of smoke.”

The alarm in the building went off and all of the other residents safely evacuated the building. Seventeen fire personnel and all three stations responded to the fire. Firefighters say it is the second fire in a month sparked by a cigarette.

A dog was also brought out of the unit by the fire department and was in good condition. The dog was left with the building manager and the owner’s daughter eventually picked up the dog.

Lefebvre said that the man was awake and talking to the fire medics while they were transporting him to the hospital.

“When we transferred care to the hospital he was okay, other than he did have some burns and he will be suffering a little bit from smoke inhalation,” Lefebvre said.

The fire chief said that the sprinkler system was activated in the building, which prevented the fire from spreading. When the fire department arrived on the scene the fire was basically extinguished but there was still a lot of smoke in the unit.

“They said that the sprinkler almost created a halo of water around him and that could have prevented him from inhaling more smoke. He was lucky,” Lefebvre said.

The building suffered $400,000 in damage from the incident and Lefebvre said that it was mostly due to water damage from the sprinkler system. The tenants and condo association have insurance to cover the damages.

The suite below the unit where the fire broke out suffered damage from sprinklers and the unit is currently uninhabitable.

Lefebvre said the woman who lives in the lower unit is away right now and her unit will likely be restored by the time she returns. The 66-year-old man is still in the hospital but Lefebvre said that he has family to stay with once he is released.

The fire chief said that by Sunday night restoration crews were on the scene mopping up water and putting in dehumidifiers.

This is the third fire in the city in less than a month.

A cigarette in a planter was the cause of a large blaze on Friday, March 3 that caused around $1 million in damages and left two Heritage Lane families homeless. Another fire was sparked earlier in the week after a plastic container was placed on a stove and the burner was bumped on.

Lefebvre said that smokers can prevent fires by using proper receptacles for their cigarettes.

“Smoking has become socially unacceptable and people try to hide it a bit and don’t have ashtrays around the house anymore,” Lefebvre said.