Greg Christenson plans to keep resident groups together in his other buildings to preserve their sense of community.
May 13, 2021 1:00 PM By: Jennifer Henderson, Local Journalism Initiative reporter 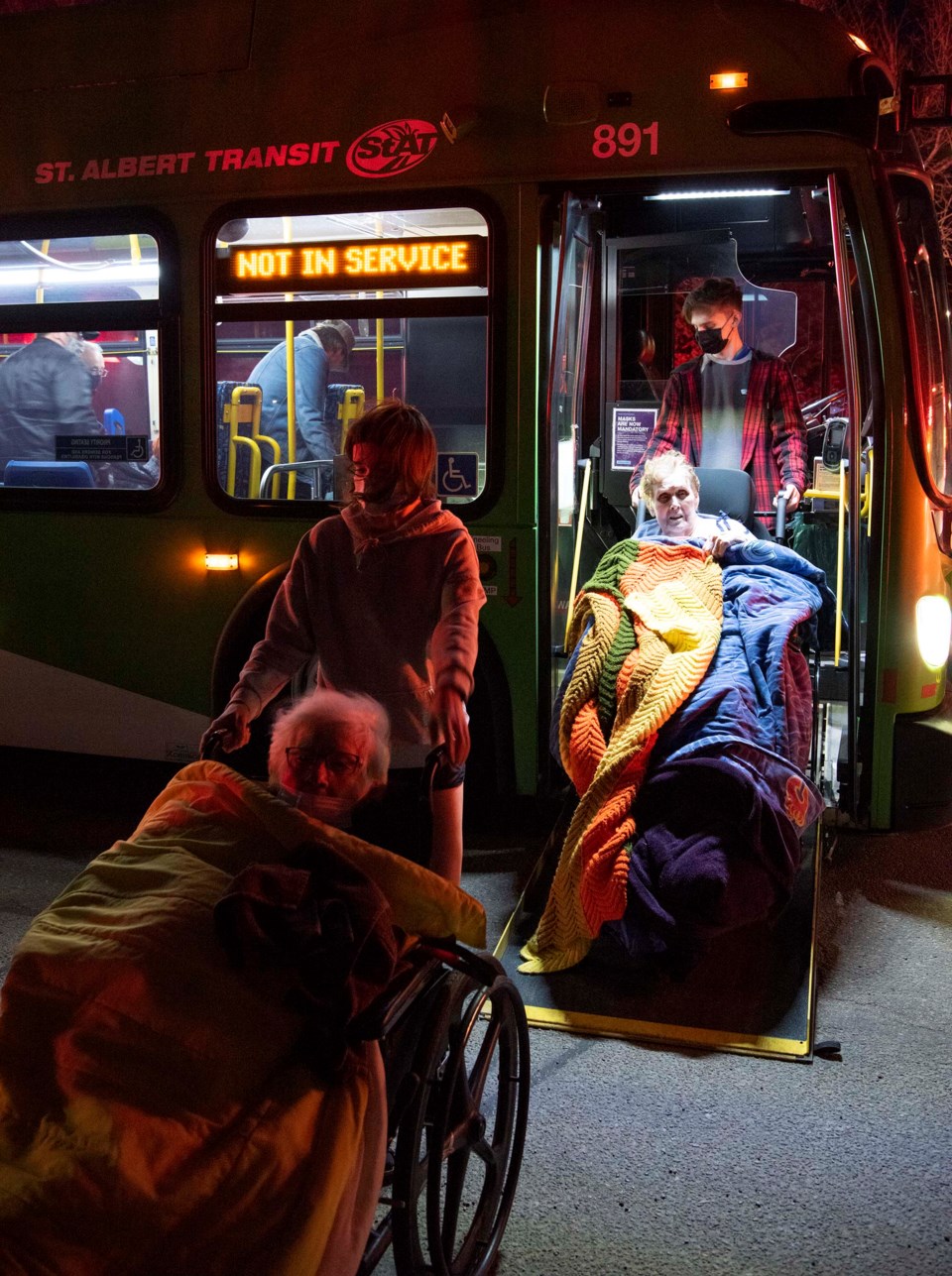 Volunteers from the Erin Ridge neighbourhood stepped up to help about 50 seniors get onto evacuation buses after a building in the complex was ravaged by fire. KEVIN MA/St. Albert Gazette

Greg Christenson was watching the Oilers game Thursday night when he got the call that Citadel Mews West was burning.

Christensen, who owns the St. Albert seniors' residence, jumped in his car with his girlfriend. They didn't see much smoke as they drove into St. Albert until they descended the hill near the downtown core.

"(Once) you got to the downslope of the river valley, into downtown, then you can see up on the hill to the north ... big plumes of dark black smoke and flames out of control," Christenson said.

“It was a dramatic introduction.”

What followed were tireless hours of helping residents who had been evacuated and transported to the St. Albert Inn. Christenson didn't go home until the last resident was located unscathed in her suite at the burning building after 1 a.m.

Christenson said he didn’t panic because he owns multiple seniors’ homes across the province, including Citadel Mews East – another building in the three-building complex in St. Albert – and he has dealt with fires before, although none of this magnitude.

“You don't want anybody to get excited or panicked,” Christenson said.

He focused on staying out of the way of emergency responders, but remained at the scene to answer any questions and field phone calls. The staff at the home, Christenson said, worked hard to get everyone out safely. Even those who weren’t working that night or who worked at other sites came in to help.

“That was kind of a relief. For me, it ended on a good note, but I'm totally aware that a whole bunch of work took place after (I went home),” Christenson said.

In other types of living facilities, you can run fire drills for residents and train them on how to react to a fire, but when special issues are introduced, such as dementia, the outcomes can be quite different, he said.

Christenson said he has sympathy for all the seniors who were displaced, and for the many residents in the neighbouring long-term care building who struggled to understand what was happening.

“It's still stressful to go from lying in your bed to (being) relocated once or twice in a night,” Christenson said.

“I'm sure they'll be well cared for, but I think they had a much more difficult evening ... it was all stressful, but I think it'd be very confusing to be sitting in a ballroom at a hotel with 40 or 50 co-residents, not really knowing where you're going or when you're going to get there.”

Christenson said he hopes he can accommodate residents at his other homes nearby, such as his location in Westmount, and wants residents to stay together as much as possible so they still feel like they have a community and a strong relationship with the staff and their caregivers.

The province will be helping to relocate the residents in the designated supportive-living and long-term care homes.

“Particularly the care people, they don't relocate well. It's stressful for them. That's confusing for them, particularly if there's any dementia, and many have mild dementia in our building,” Christenson said.

The owner said, along with relocating residents, he is also working to relocate staff to other homes so they can continue to work.

Alyssa Goguan, a dietary aide at Citadel Mews West, said Friday she was worried about having a job to go back to but was more concerned about all the residents she has grown to love.

“I love them. They're all very great people and it made me really sad because they're just going to lose all their possessions and stuff and it's just very scary,” Goguan said.

The dietary aide wasn’t working when the fire broke out, but she drove in to see if she could help out. She saw all the nurses working hard, while still others who weren't working arrived to help, too.

While Goguan and other staff will have their work relocated, family members said putting their loved ones' lives back together is not easy work.

Carrie Sleno, whose mother lost her home and all her possessions in the fire, said the situation is overwhelming, because she has power of attorney over her mom and is her personal agent, and it will be a lot of work getting her set up again.

The daughter will have to set up appointments to get all her mom's medical supplies replaced, along with shopping for furniture and setting up her mom’s room again.

“It's more about the time. I feel like it's overwhelming to do all those things,” Sleno said.

“I just know how long it took to get everything in place for her already.”