City digs out from snowstorm

Snow plows and graders were working around the clock over the weekend after a massive storm dumped more than 20 centimetres of snow throughout the region, making some local streets impassable.
0
Dec 8, 2009 11:00 PM By: St. Albert Today Staff 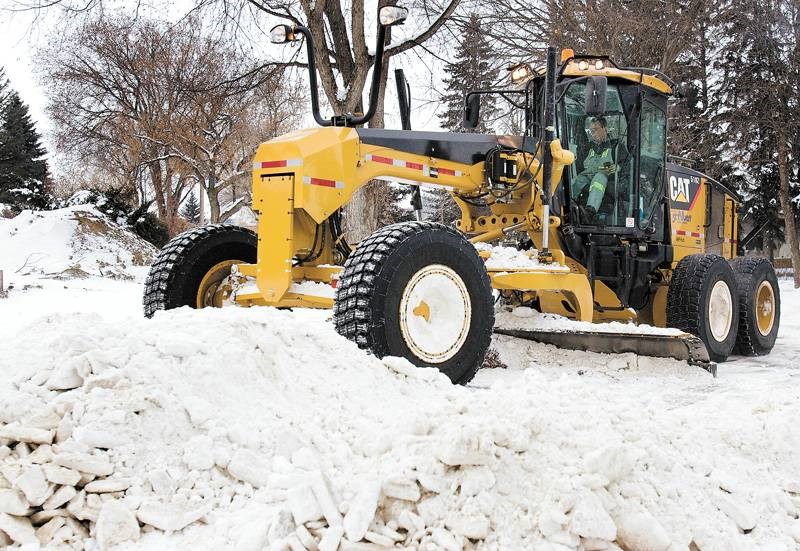 Snow plows and graders were working around the clock over the weekend after a massive storm dumped more than 20 centimetres of snow throughout the region, making some local streets impassable.

The city received numerous phone calls from residents who suddenly found themselves knee-deep in snow that continued to fall Saturday and created more headaches for drivers.

According to Glenn Tompolski, director of public works, the snow clearing efforts have gone smoothly, with most of the arterial roads and intersections cleared.

Crews are now focusing their efforts on clearing some of the collector intersections, he said, and getting the mountains of snow out of the downtown parking lots.

“It’s going to take the better part of the rest of the week just doing clean up and getting to those areas where we got some heavy snow,” said Tompolski. “The challenge we have right now is the amount of snow has caused a lot of intersections to build up.”

The city’s snow clearing policy states all arterial roads, such as St. Albert Trail, Boudreau Road, Bellerose Drive and Hebert Road, are top priority and must be cleared within 12 hours. The collector roads are cleared next within 24 hours, which include major roads within each neighbourhood.

Both collector and arterial roads were plowed several times over the weekend as the storm intensified and strong winds caused blowing and drifting snow.

Steve Olsson experienced first-hand the aftermath of the storm when he woke up Saturday morning to discover much of his fence had been damaged due to snow clearing efforts along Grandin Road.

Since the fence is only about three or four feet from the road, the force of the snow being thrown from the graders completely knocked down his fence in two sections and left another portion standing at a 45-degree angle.

Olsson is in talks with the city to come up with a short-term solution to fix his fence for the winter.

Aside from that, he’s giving city snow removal efforts from the weekend storm the thumbs up.

“I think they do a fantastic job. I think a lot of snow came at once and they have a big job to do, so I am thrilled with their service,” said Olsson, who also noticed many of the bus benches were knocked over along the same stretch of road. “My fence looks like a bomb went off, but they got the snow off the road.”

At the end of the week, city officials will assess the condition of roads and decide whether or not some of the collector routes and residential streets will undergo further clearing. Tompolski said there is no plan to tackle residential streets at this time.

Earlier this fall, city officials projected to be over budget by about $200,000 for snow and ice removal due to a citywide snow clearing effort last February. That budget variance will likely increase as a result of the recent snowstorm, Tompolski said.