City hauls in over a tonne of invasive goldfish 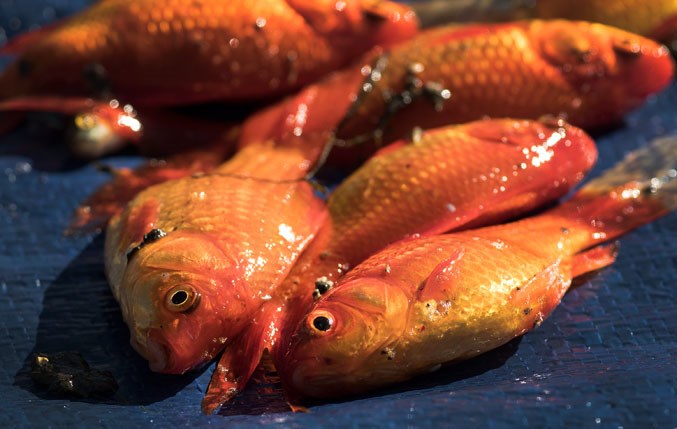 BIG CATCH – Dead goldfish lay on a tarp after City of St. Albert public works employees applied a pesticide to Edgewater Pond on Everett Drive to remove the invasive Asian Goldfish in St. Albert on September 26, 2017. Crews ultimately collected about a tonne of goldfish from Edgewater and nearby Ted Hole ponds, possibly setting a provincial record.

St. Albert may have broken a provincial record by hauling in more than a tonne of invasive goldfish from two stormwater ponds this fall. City crews used the pesticide Rotenone on the Edgewater and Ted Hole Park stormwater ponds earlier this fall to try to wipe out their populations of Asian goldfish. Goldfish are an invasive species in Alberta that can outcompete native fish if released into the wild. They’ve been in the isolated Lacombe Lake Park for decades, but were only spotted in Edgewater in 2015 and in Ted Hole last spring. That sparked concern, as those ponds had a sewer link to the Sturgeon River. The city broke out the pesticides on the advice of Alberta Environment after nets, electricity and winter’s icy grasp failed to eliminate the invaders. Crews collected about 1,070 kilograms of goldfish from the two ponds and sent them to the landfill, said city environment director Leah Kongsrude. “That’s over a tonne of Asian goldfish.” Tanya Rushcall, aquatic invasive species technician with Alberta Environment, said this was the most goldfish she’d ever heard of being recovered in a municipality. “This was a very large amount of fish!” she said in an email. City crews had expected to find 5,000 fish at most between the two ponds and maybe a few hundred at Ted Hole, Kongsrude said. Instead, they got about 35,000 total – close to one for every two people in the city – with about 2,500 of those found at Ted Hole. The rest of the fish were at Edgewater – a pond that has only been around for about five years. “That’s the reason (goldfish) are considered invasive,” Kongsrude said, noting that this infestation could have started with as few as two fish. “They’re unbelievably prolific.” Crews will use minnow traps to try to spot signs of goldfish next year, Kongsrude said. Given the number of fish found, however, she doubted that they had gotten them all. “I would not be surprised if we have to come back next year and treat these ponds again.” Kongsrude said crews were considering plans to use Rotenone on the Lacombe park lake next year. While that lake is not usually connected to the Sturgeon River, fish could escape from it if it ever overflowed. The lake was also stocked with rainbow trout, however, which may be keeping the goldfish in check. Rotenone is a pesticide that breaks down after a few weeks and kills fish without affecting other plants and animals. St. Albert’s last major use of it on fish was in 2010, where the chemical was deployed to kill the invasive three-spined stickleback in Riel Pond. Anyone who spots an invasive fish (such as koi or goldfish) in the wild should call 1-855-336-2628 (BOAT) and report it to their local authorities. Visit http://bit.ly/2xAFA9r for more on invasive fish.