The man who will take on the top job with the City of St. Albert is no stranger to public-sector work, as he’s currently the deputy manager of the Regional Municipality of Wood Buffalo.
Nov 2, 2016 12:00 AM By: St. Albert Gazette 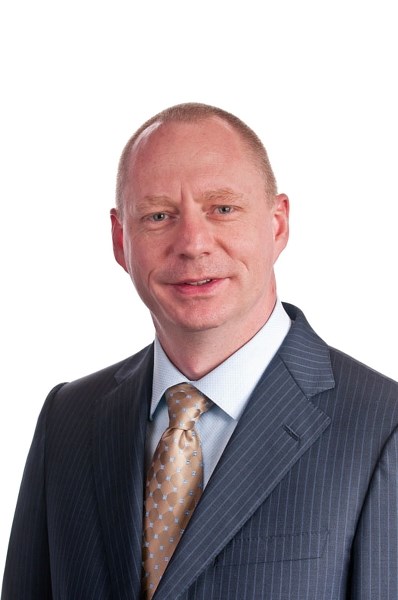 NEW CITY MANAGER â€“ Kevin Scoble will begin his job as the new city manager in St. Albert on Jan. 2

The man who will take on the top job with the City of St. Albert is no stranger to public-sector work, as he’s currently the deputy manager of the Regional Municipality of Wood Buffalo.

The city announced on Monday that Kevin Scoble would start work as the new city manager Jan. 2, 2017.

Scoble said he’s looking forward to the move to St. Albert, having visited fairly often in his role as hockey or baseball coach.

“It’s got great services, amenities and programs,” he said. “I’m looking forward to maintaining and enhancing those, and my family and I are really excited about becoming contributing members of the community.”

A professional engineer, he has spent the past year and a half as the deputy chief administrative officer (CAO) with the municipality, after starting as the director of environmental services in 2010 and being promoted into an executive role.

Prior to that Scoble spent 18 years working mostly in the oil industry, with the exception of a two-year stint as solid waste manager for the City of Medicine Hat.

He said his combination of public and private sector experience has lead to an understanding of the need for a “prudent, accountable and balanced approach to local government,” that sees all services to the public as being equally important.

And while he’s open to change where needed, he doesn’t endorse the idea of change for its own sake.

“I do believe innovation is appropriate where it’s needed, but at the same time if it isn’t broken, don’t fix it,” Scoble said.

Mayor Nolan Crouse said the decision to hire Scoble was a difficult one, given there were upwards of 100 applications for the city manager job, but he’s confident they made the right choice.

He cited two reasons why Scoble emerged as the top contender.

“He’s got a lot of municipal experience, and that was important to us,” he said. “I think the second thing was his professional approach in both the job interviews we had.”

Crouse the often-acrimonious dynamic this council has displayed, both internally and with the previous city manager, weren’t a factor in the interview process. Council members agreed Scoble was the best choice for the job.

“I don’t even remember that entering the conversation, frankly,” he said, noting all seven council members were involved in the hiring process. “We interviewed all together … throughout the interview process.”

For his part, Scoble said he’s not concerned about the prospect of friction among councillors or in his role as city manager. Scoble said if he couldn’t handle criticism he wouldn’t be working in the public sector.

Outside of his role at city hall, Scoble said he hopes to continue with some of his volunteer work. He spent 10 years on the executive of the Fort McMurray Minor Hockey Association including three as president, and more recently took on a role with Hockey Alberta.

“I believe that service to the community is important. Everybody needs to contribute; that’s what community is,” he said. “It’s about coming together and helping out.”

Interim city manager Chris Jardine will continue in that role until Jan. 1, 2017. He’s stated his intention to retire by the end of that month.