In October, council voted to not renew its contract with its integrity commissioner after concerns about whether investigations done in the past were valid and worth the money. Instead, city staff and council will determine whether an independent investigation against a councillor is necessary.
Jan 13, 2021 8:00 AM By: Brittany Gervais 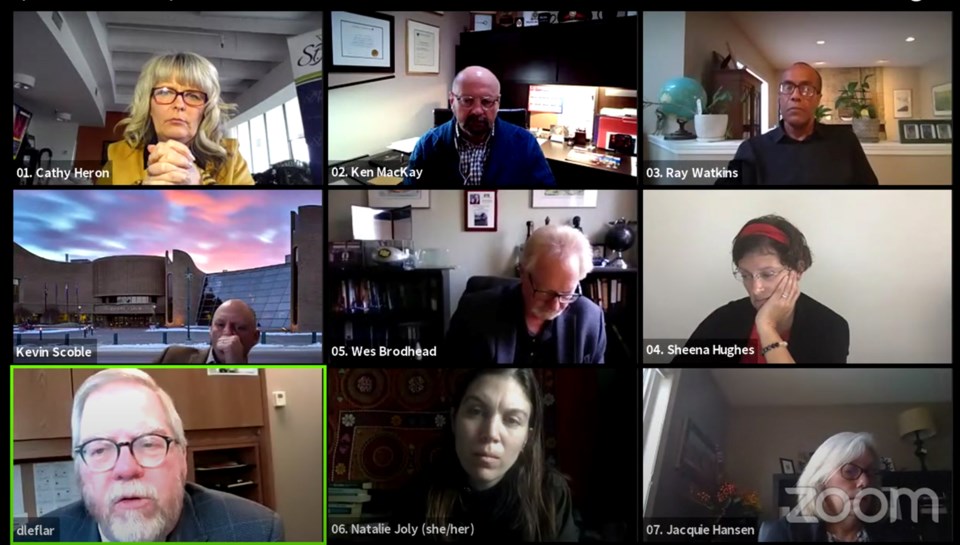 Coun. Sheena Hughes attended Monday's council meeting via Zoom after a resident filed a formal complaint against her decision to travel internationally during the pandemic. SCREENSHOT

St. Albertans could have one opportunity to address Coun. Sheena Hughes directly and publicly for her decision to travel to Mexico during the COVID-19 pandemic, should city council see fit.

Last week, St. Albert resident Bill Horne filed a formal complaint against Hughes. The allegation is that Hughes violated one or two sections in the council code of conduct specific to "ethical conduct" and serving the "welfare and interests of the city as a whole and the community at large."

On Monday, David Leflar, city director of legal and legislative services, suggested that the public be allowed to speak to the matter once it comes back to council. Hughes will also be given time to respond, he said. Whether the public can address council before or after a decision is made has not yet been decided, according to the city.

"If you're worried about members of the public having the opportunity to not just send an email or post something on Twitter, but to actually speak directly to council, my recommendation is that we allow that opportunity – as long as we allow the councillor in question to respond," Leflar told council.

One speaker, Mike Cockrall, was on Monday's agenda to speak about the matter but was unavailable to call in and was postponed to another date in February, according to the city.

This will be the first time the city uses a new process to investigate a formal complaint made against a city councillor.

In October, council voted to not renew its contract with its integrity commissioner after concerns about whether investigations done in the past were valid and worth the money. Instead, city staff and council will determine whether an independent investigation against a councillor is necessary.

Under the new process, a complaint isn't filed to an integrity commissioner but to Leflar. Leflar then sends the complaint to the councillor in question, who has a certain amount of time to respond. In this case, Hughes has until 10 a.m. on Feb. 5 to reply.

Once received, Leflar determines whether there's any discrepancies of what happened between the two statements. If so, the city would hire an independent integrity commissioner – not to decide the outcome, but to "help resolve any disputes about the facts."

The report would then go to council. At that point, the public could be allowed to address the councillor in question, Leflar said. Then councillors themselves would discuss the matter in camera and vote whether or not to impose sanctions. That decision would be made public.

"This is unlike the way it worked before the amendment," he said. "The investigator doesn't make a judgment call as to whether there's been a breach of code – that's council's job. Only council's job."

Hughes, who called in to Monday's meeting from Mexico, questioned whether the new process is fair given the in camera nature of investigations done last year.

One complaint against Coun. Ray Watkins for conduct during a public hearing over Zoom was investigated by the integrity commissioner, but the findings of the report remain confidential. Any sanctions would have been reported publicly however, according to the city.

"In the past, there wasn't an opportunity for the public to speak the day that council made its decision. So this seems to be quite a stretch from what happened last year," Hughes said. "It does look like this will be used as a political weapon."

Leflar said in the revised process, there's nothing that specifically says the public will be allowed to address the councillor in question. However, this complaint is very much in the public eye, he said.

Coun. Ken MacKay asked how much hiring a third party would cost the city, and if there was a cap to costs as "this situation could get quite expensive."

Previously, the city spent $2,000 a month to keep the integrity comissioner on call in case there was a need for an investigation. The contract also stated the city could not spend more than $40,000 on the commissioner’s services.

Under the new process, Leflar said the city does not have any money budgeted to hire a private investigator. No funding sources have been identified yet should the city require outside legal opinion, either.

"Investigations go where they go, and in terms of costs, we don't have anything budgeted for this," he said, noting that expenses will be tracked and a source of funding identified as the process goes on. "We're kind of in uncharted waters."

In an interview with CTV News Edmonton, Mayor Cathy Heron suggested Hughes should consider resigning over the decision.

"She has a lot of work ahead of her to regain the trust of St. Albertans," Heron told CTV News. "If she's not running this fall then it might be easier on her family to end some of the pain now."