Instead of fighting for a slice of the existing pie, St. Albert will be sharing a larger proverbial pie with the other municipal partners on economic development, Mayor Cathy Heron explained.
Apr 20, 2021 5:40 PM By: Brittany Gervais 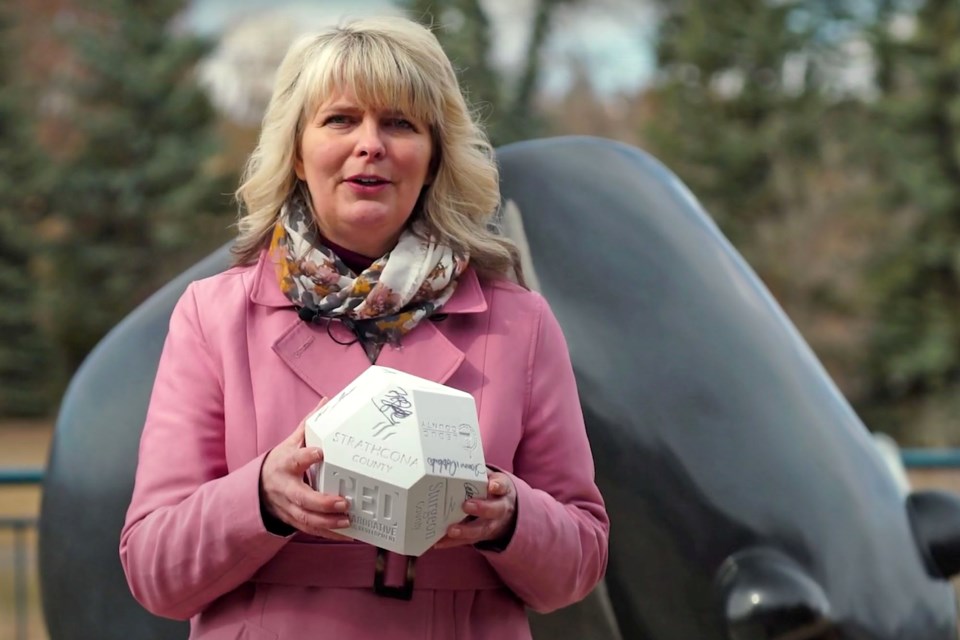 Mayor Cathy Heron appearing in the promotional video announcing a new regional partnership around economic development. In the video, Heron signs a white 'dice' with the names of the 13 municipal partners before passing it off to Premier Jason Kenney.

Instead of going after economic opportunities alone, the City of St. Albert has signed onto a new initiative to attract and benefit from regional foreign direct investment.

These mayors signed a memorandum of understanding (MOU) on April 12 to develop a framework for municipalities to attract non-residential investment and create a model in which those financial benefits would be shared.

So instead of fighting for a slice of the existing pie, St. Albert will be sharing a larger proverbial pie with the other municipal partners on economic development, Mayor Cathy Heron explained. In the past, St. Albert has been undercut by other neighbouring municipalities who were vying to attract the same business, she said.

"It's going to be preventing that cross-boundary competition and allow us to compete, not even on a regional level, but on a global level. This is about attracting foreign direct investment, and getting the big guns into the Edmonton area," Heron said.

The MOU isn't a binding agreement, but is supposed to be interpreted to enable co-operation, with the municipalities working together to develop the framework itself. That framework will guide partner investments and new revenue sharing based on certain principles, which each partner agreed to by signing the MOU.

The CED is still in the early stages, but Heron pointed to St. Albert's Lakeview Business District as a potential example. If other partnering municipalities thought Lakeview had real potential, they could contribute whatever amount of money they could afford at the time. So if Leduc put in 10 per cent of the cost to service Lakeview, then Leduc would receive a proportional amount of revenue in return.

"There's talk about using some of the new assessment dollars to pay for regional initiatives, so maybe to cover the cost of regional transit, which would take a significant amount of assessment, or tax dollars, off St. Albert residents' plates," Heron said. "We've got lots of great ideas, and we're going to come to a consensus over the next couple of months on how that'll work."

While these partnering municipalities work together to open up specific investment opportunities, economic development organization Edmonton Global will act as the agency to market the region to international investors, she said.

"The Edmonton Metropolitan Region has a lot to offer," Heron said. "With that kind of alignment between the 13 municipalities and Edmonton Global, we'll be a force to be reckoned with."

Heron said St. Albert led the charge in getting conversations around collaboration started. Last year, Heron brought forward a similar motion to the Edmonton Metropolitan Region Board (EMRB), but that motion failed.

That's when the mayors in favour of regional collaboration met to talk about moving forward on collaboration anyway, hoping the rest of the municipalities who voted against it would jump on board.

"I'm super proud and super excited that St. Albert has been leading this initiative," she said.

The CED initiative will have an oversight committee comprised of the mayors or councillors, which reports to each respective council. City councils will be the final decision-making authority on this.

Meanwhile, a steering committee comprised of the chief administrative officers from each of the partner municipalities will work with a separate working group to come to an agreement on decisions.

Existing staff capacity and expertise will be used "as much as possible" to cover the costs of actually creating the framework, but anything else will be shared among the municipalities as determined by the oversight committee.

As for costs related to projects negotiated under the CED framework, partnering municipalities will enter into a separate agreement on a project-by-project basis that would detail what costs are needed to develop it out.

In a promotional video released on Tuesday, Alberta Premier Jason Kenney congratulated the municipalities on signing this "historic" agreement.

"The collaboration that came into this agreement that you've signed and that you'll express in supporting new business growth and investment is going to be a key part of Alberta's economic recovery," Kenney said.

Staff from the partnering municipalities will now work to develop the details of the CED model, which will require engagement with various stakeholders to make sure it can drive business investment in the region.