City to use pesticides on goldfish menace

Edgewater and Ted Hole ponds to get Rotenone treatment as city tries to slay persistent piscine problem.
Sep 23, 2017 12:07 AM By: Kevin Ma 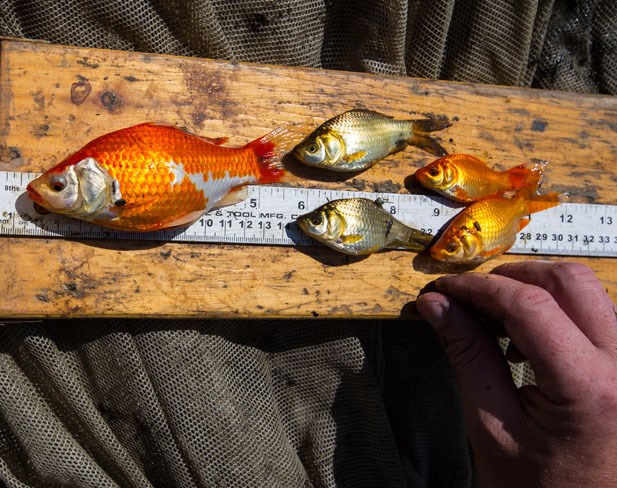 ALIEN INVADERS — A sample of invasive goldfish retrieved from Edgewater Pond in 2015. City crews will treat the pond and the one in Ted Hole Park this week with pesticides to try and eliminate these fish, which are a threat to native species.

City crews will break out the chemical weaponry this week to try and take out some invasive goldfish before they invade the Sturgeon River. City environment director Leah Kongsrude said the city would treat the Edgewater and Ted Hole Park stormwater ponds next week with the pesticide Rotenone in an attempt to kill goldfish in them. Goldfish are an invasive species in Alberta known for growing to huge sizes when released into the wild, where they are considered a threat to native fish. While city officials have known since at least 1999 that the Lacombe Lake Park stormwater pond had goldfish, it wasn’t until 2015 that residents spotted hundreds of them in Edgewater Pond – just months after the province started a new push against aquatic invasive species. Unlike the self-contained Lacombe Lake Park, Edgewater had a sewer link to the Sturgeon River. The city used nets, electricity, and winter’s ice to try and exterminate the goldfish. Nothing worked. Last spring, residents spotted dead goldfish around Ted Hole pond, which is downhill from Edgewater, said Kongsrude. It’s not clear if there are still fish in the pond, or if the fish moved from Edgewater to Ted Hole, but the city isn’t taking any chances.

Goldfish are likely to out-compete native fish when released into the wild, as they eat their eggs and food sources, said Tanya Rushcall, aquatic invasive species technician with Alberta Environment. While they’ve been spotted in man-made water bodies across the province, they’ve yet to show up in natural ones, and the province wants to keep it that way. Given that they’ve already tried several physical methods of destroying the fish, the province has advised St. Albert to break out the Rotenone, which it has provided at no cost to the city, Kongsrude said. “Eradication is our objective.” Rotenone will kill any fish in these ponds, which technically aren’t supposed to have any fish in them anyway, Kongsrude said. It does not affect other plants or animals. “You’d have to drink like a swimming pool’s worth (of water treated with it) to actually be impacted,” Kongsrude said, and birds can eat fish killed by it safely. Rotenone also breaks down naturally over several weeks, she added. Crews will erect signs and fences around Edgewater and Ted Hole ponds next week before they deploy the Rotenone, Kongsrude said. Backpack sprayers will treat the edges to drive fish into the middle, where a boat will dump more of the chemical on them. Residents may notice dead fish and a milky colour to the water soon after. Crews will treat Edgewater Pond on Tuesday and Ted Hole later that week, Kongsrude said. Edgewater will get a second treatment in early October. Crews will also plug the outfalls so no chemical-laden water escapes. Crews will check the ponds daily to collect dead fish. Once tests determine that the Rotenone has broken down, crews will remove the plugs.

Kongsrude said it’s unclear if goldfish have reached the Sturgeon, but notes that none have been spotted so far. “I’m hoping it’s isolated to these ponds for now,” she said, adding that she would not be surprised if more goldfish turned up. The city plans to use Rotenone on Lacombe Lake next year to wipe out its goldfish, Kongsrude said. Doing so would also kill its trout (which are stocked annually) and crayfish (which aren’t native). Okotoks, High River, Grande Prairie and Olds have all successfully used Rotenone to control goldfish in recent years, Rushcall said. Anyone with a dead goldfish should bury or toss it in the trash, as it could spread disease if flushed, Rushcall said. Live fish should be donated, returned to the store, or killed, not dumped (which is generally how these fish end up in stormwater ponds). Anyone who spots an invasive fish should call 1-855-336-2628 (BOAT) and report it to their local authorities. Visit http://bit.ly/2xAFA9r for more on invasive fish.