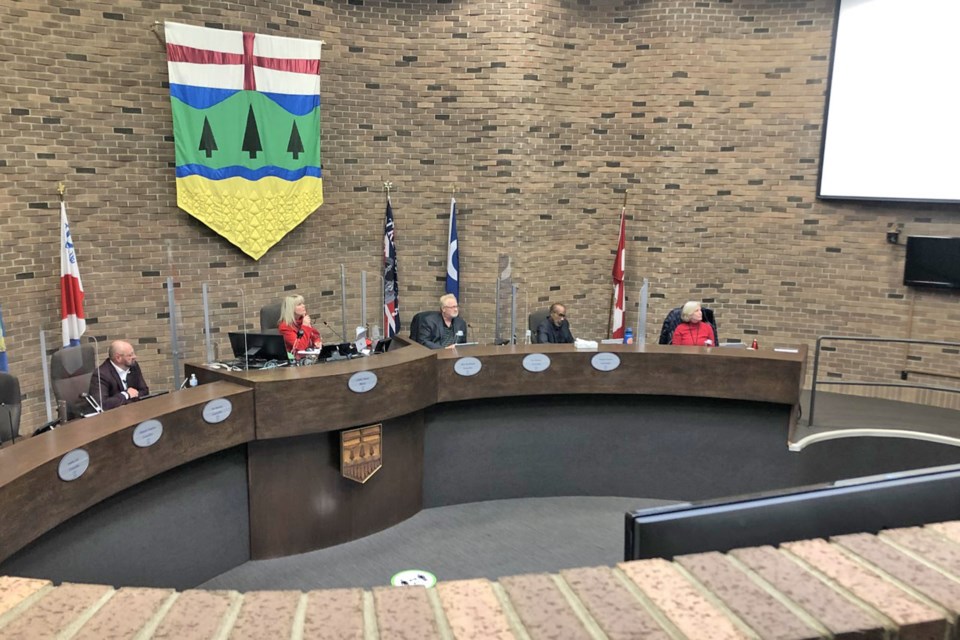 City of St. Albert councillors have voted to allow the use of clear face shields under the city's mandatory mask bylaw.

On Oct. 19, councillors voted 6-1 (Coun. Natalie Joly against) in favour of an amendment brought forward by Coun. Sheena Hughes to change the wording of the bylaw to allow the use of clear face shields.

Council was initially set to vote on third reading of an amendment that would exclude the use of face shields as an acceptable face covering.

That changed over the course of the hour-long debate, which featured five residents speaking against the original amendment over Zoom.

Brandy Dominelli spoke on behalf of her eight-year-old daughter, who is medically exempt from the city’s bylaw.

Even though she is exempt, Dominelli said her daughter has been refused service at many St. Albert businesses, including at a local dance school. Her daughter was only able to join another dance academy if she wore a face shield, she said.

“So today, if your amendment goes through, her ability to attend her dance class is gone,” Dominelli said. “My beautiful daughter continues to receive blatant experiences of discrimination on a daily basis. This is the real life of an individual with a masking exemption.”

Louise Berezowsky, mother of five-year-old Clara, who is deaf, called the bylaw amendment “devastating.” She compared the amendment to council taking away wheelchair ramps out of fear of someone tripping.

“You have to understand that lip-reading to a deaf individual is their wheelchair ramp to the hearing world,” Berezowsky said while holding her daughter. “We have every right to communicate as a member of this community freely without judgement, isolation and discrimination.”

David Leflar, city legal and legislative director, said the bylaw amendment would impact people wearing clear face shields out of convenience, but anyone who has a real need to take off their mask because of a disability or to communicate can do so.

No other municipalities in the region have made amendments to exclude face shields in their temporary face-covering bylaws.

Coun. Sheena Hughes brought forward an amendment to the bylaw’s language to allow the use of clear face shields.

She said she has heard from store employees in St. Albert who wear clear face shields at work because they have physical and mental challenges from wearing face masks for long periods of time. The amendment would force people to choose between wearing a mask and staying employed, she said.

“I’m asking that we don’t force people to have to choose between providing for their families and complying with a bylaw, because the employers are reading the bylaw as verbatim,” Hughes said. “These are the people I am asking that we show compassion to.”

MacKay spoke in favour of the amendment, recognizing the unintended consequences that excluding face shields could cause for vulnerable residents.

“It’s sad in our society that often the burden to spur change for inclusion and accessibility always falls on the marginalized group. They bring awareness to us because that’s their life, they live that life every day,” he said. “To us, we may not see that problem, because we don’t live in that world.”

Joly said the situation described by Hughes was contrary to the human rights law, but it has “nothing to do with whether this amendment passes or not.” She also spoke out against the “horrific” treatment described by residents at the meeting and urged people to not stigmatize others.

“Right now, this face shield clarification doesn’t exist and yet people are still being stigmatized,” she said. “By signalling our support of the recommendations of Alberta Health Services, we’re just reminding our residents that if you can, please do your best.”

Mayor Cathy Heron said she had “sober second thought” on the amendment from two weeks ago, and called the harassment described as “unacceptable," urging residents to show compassion towards each other.

“Anger is the bodyguard of fear, and people are scared and they quite often turn to anger. And we can’t allow that, we have to support each other,” she said.

“I want to develop a bylaw that includes face coverings because I am a firm believer in them, but has some flexibility that if you prefer the face shields, it’s better than nothing.”