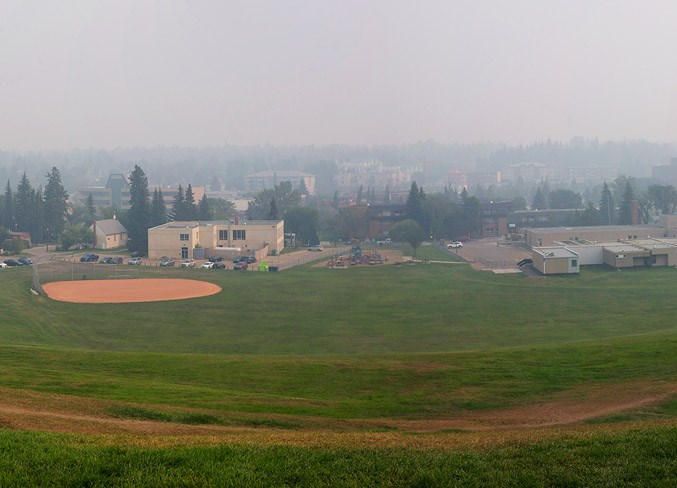 This a view of heavy forest-fire smoke taken from atop Mission Hill in St. Albert earlier this week.

St. Albert residents shouldn’t hold their breath this weekend for more than a temporary respite from all that smoke, a local weatherman says.

Warren Footz at the St. Albert Running Room said he’d noticed a drop in the number of people showing up to the store’s running club events due to the smoke, but he personally wasn’t too affected by it.

“You do notice the burn in the back of your throat,” he said, and you dial back the speed a bit on your runs.

Still, he suspected many of those who have trained for this weekend’s Edmonton Marathon would try to run the whole distance, perhaps at a slower pace.

Meanwhile, St. Albert astronomer Bruce McCurdy said the smoke ruined last weekend’s Perseids Pyjama Party at the University of Alberta Botanic Garden, as it made it impossible to see any of the eponymous meteors streaking through the night sky.

“Smoke in the air seriously cramps our style,” he said of astronomers.

What’s with the smoke?

The 500-some wildfires now burning in B.C. are sending a huge amount of smoke over the Rockies via prevailing winds, said Environment Canada meteorologist Brian Proctor.

“Yesterday the smoke covered basically all of the province,” he said, speaking on Thursday.

Those smoke particles are big enough to scatter light, which is why it looks so hazy and dark out, said staff scientist Mirabelle Prémont-Schwarz at the Telus World of Science Edmonton. That includes the light of the rising sun, which is what gave St. Albert that post-apocalyptic glow Wednesday morning.

Fine particulate matter levels over St. Albert reached some 181 micrograms per cubic meter on Wednesday morning, reports the city’s air quality monitoring station – far below the 392 seen on Aug. 10 but still way above the 30 considered acceptable under Alberta’s Ambient Air Quality guidelines. Air quality here was ranked as moderate to high risk for about half of the past week, and actually hit the 10+ “Very High Risk” level for about six hours on Aug. 10, said Gary Redmond of the Alberta Capital Airshed.

Proctor said Friday’s cold front should bring clearer skies and cooler temperatures for much of this weekend. But B.C. is still burning, so he expected the smoke and heat to come back by next Wednesday, and to continue off and on for up to five weeks.

Anyone with asthma or other breathing difficulties should stay indoors when it’s smoky out or seek shelter in a place with good filters and air conditioning, such as a mall, Proctor said.