Climate change isn’t about polar bears or the future, says a renowned American climate scientist – it’s about you and me, right here, right now.
0
Mar 6, 2018 11:54 AM By: Kevin Ma 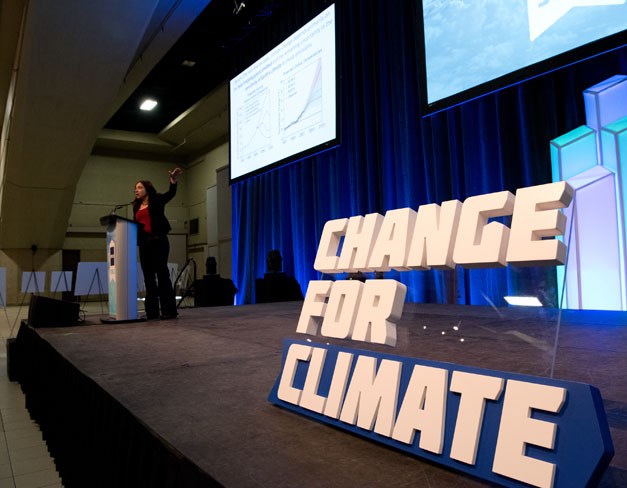 WHY IT MATTERS — U.S. climate scientist Katharine Hayhoe speaks to hundreds at the Shaw Conference Centre Monday on how climate change is affecting Albertans. Hayhoe was giving a free talk as part of the Change for Climate series, which was a side event to an international climate science conference held in Edmonton this week.

Climate change isn’t about polar bears or the future, says a renowned American climate scientist – it’s about you and me, right here, right now.

That was the main message given by Texas Tech University atmospheric scientist Katherine Hayhoe Monday in a pair of talks at the Edmonton Shaw Conference Centre.

Hayhoe spoke before about 500 people as part of a series of free talks at the Cities and Climate Change Science Conference in Edmonton this week. She is a renowned climate scientist and communicator who has written a book on climate change and Christianity and was named one of Fortune’s world’s greatest leaders in 2017.

Most people don’t have a problem with the science of climate change, Hayhoe said – it’s the same science that makes freezers cold and airplanes fly. Yet researchers have found that well below half of Americans believe climate change matters to them.

“The most dangerous myth we’ve bought into is the myth that (climate change) is a distant issue,” she said.

We think of climate change as something that matters to foreigners or polar bears, but it’s really something that affects the risks we face right here today, Hayhoe said.

Alberta is already seeing fewer cold days, warmer summers and longer growing seasons due to climate warming, said Hayhoe, who is researching climate change’s impacts for the Alberta government – changes that will accelerate as the world warms. Hurricane Harvey swamped her home state of Texas last year, and scientists have determined that 15 to 40 per cent of its rain would not have fallen without climate warming.

“The impacts are real and they are happening here,” Hayhoe said.

Researchers have known since at least 1938 that the world is warming due to fossil fuel use, said Hayhoe. They’ve also ruled out other suspects such as the sun (which is cranking out less power, not more, now than it was 50 years ago), El Niño (which moves heat around but doesn’t increase it), and post-ice-age warming (which topped out about 8,000 years ago).

We’re now adding about 10 gigatonnes of carbon to the atmosphere a year, which is a rate of change the world hasn’t seen in about 100 million years, Hayhoe said.

“We have never kicked our planet this hard and this fast.”

The result has been melting ice and permafrost, more temperature and precipitation extremes, and more “global weirding,” such as last week’s bizarre situation where most of Europe was colder than Greenland, Hayhoe said. Those carbon emissions are also acidifying the oceans, which affects people who eat seafood.

Alberta’s winters have warmed by about 0.5 to 1 C a decade due to climate change, Hayhoe’s research suggests. Sounds great, but it’s cold winters that keep poisonous snakes out of this province, and cold that determines the crops we grow, the amount of air conditioning we need, and the snowpack that supplies our water. It will also affect tourism and water storage in Edmonton, as more warmth means more rain instead of snow.

You don’t have to care about the environment to care about climate change, Hayhoe said. Her home state of Texas cares about it because it makes wildfires, floods, and hurricanes more likely.

“We care about a changing climate because it affects us in the places we live,” she said in an interview.

Acting on climate change gives us cleaner air, safer communities, and a better economy, Hayhoe said – things we all value.

“If we’re a human living on this planet, we have every value we need to care about a changing climate,” she said.

Hayhoe’s talks at the climate conference can be viewed at www.facebook.com/YEGclimate.