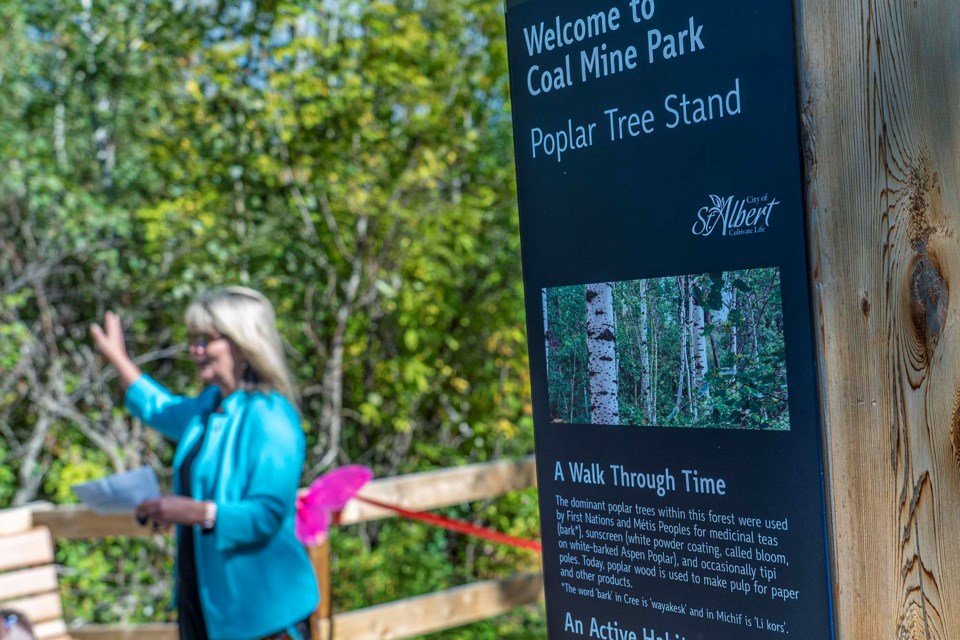 Bees, butterflies and people can now officially check out St. Albert’s newest park, which is the first in town designed help pollinators.

About 10 people witnessed Mayor Cathy Heron cut a ceremonial ribbon near Ebony Way and Everitt Drive on Sept. 9 for the official opening of Coal Mine Park.

The park, which is the large poplar forest next to Ebony Way and Everrit Drive, is the newest addition to the city’s green-space network and contains a pollinator garden. Construction of it started about a year ago and wrapped up last June.

“We humans generally depend on pollinators for our very survival,” Heron said, particularly when it comes to crops.

Coal Mine Park will provide food and habitat to animals and pollinators and act as a “stepping stone” of forested space for wildlife migrating through town, Heron said. It should also help residents connect with nature and better appreciate biodiversity.

“It’s really important to be able to have the opportunity to step off the sidewalk and onto a natural path and enjoy nature,” Heron said.

Coal Mine Park consists of a three-way trail that runs through a thick six-hectare forest. Besides the trail, some benches, and a few interpretive signs, the forest has been left largely in its natural state.

That’s intentional, as this forest was flagged as a significant natural area during the development of this region, said city parks project manager Manda Wilde.

“This is meant to be as wild as humanly possible.”

Guests can head down the packed gravel trail for a 10-minute journey through a sun-dappled sea of tall poplars set against rustling waves of autumnal green and gold leaves, during which they might encounter sparkling dragonflies, screaming blue jays and curious chickadees.

Eventually, guests reach the 25- by five-metre pollinator garden in the northeast corner of the park – a bed of mulch stocked with red osier dogwood, highbush cranberry, milkweed and other shrubs and flowers native to Alberta. City parks and open spaces operation supervisor Erin Pickard said the city chose this spot for the garden because it was free of trees and full of weeds due to prior development.

The plants in the garden would provide pollen and nectar for pollinators such as bees, beetles and hummingbirds, Wilde said. Those pollinators would help plants in the neighbourhood reproduce, improving the health of the forest and nearby gardens.

Interpretive signs near the garden tell guests about the importance of poplar trees to the Métis and First Nations and the region’s historic links to coal mining.

Lois E. Hole Elementary principal Kevin Jones said this park would be a great learning space for his students, and that they would be out here often to learn about history and forests.

Pollinator gardens may be new to city parks, but aren’t new to St. Albert – the St. Albert Botanic Park down the hill has had one for a few years, for example.

Naturalists promote pollinator gardens as a way to support pollinators, many of which are in decline – the Xerces Society reports that some 28 per cent of North American bumblebees are at some risk of extinction due to pesticides, habitat loss and climate change, for example.

A good pollinator garden includes a wide variety of plants that bloom at different times of year so pollinators always have something to eat, said professional horticulturalist Jim Hole. Bee balm, eggplant, squash and snapdragons are all good choices. Peas and double-flower plants are not, as they do not produce accessible pollen. Avoid using pesticides, and keep some bare ground open, as many bumblebees nest underground.

Pollinator gardens look beautiful and are a great way to teach kids not to be afraid of insects, Hole said.

“The flowers benefit, the bees benefit – it’s all good.”