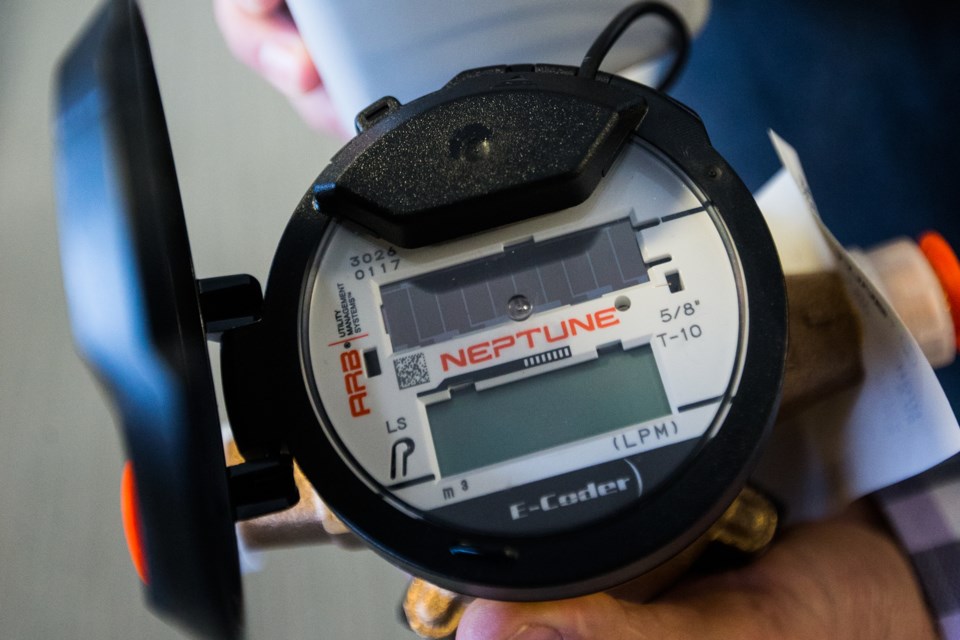 A view of the new smart water meters that have been installed in St. Albert as part of a $6.4-million replacement program. CHRIS COLBOURNE/St. Albert Gazette

An opt-out option for smart water meters involving $35 manual readings will be making its way to council early next month.

The opt-out option will appear before council nearly two years after the city first began rolling out a $6.4-million mandatory water replacement program. In early 2018, the city began exploring a paid opt-out option for residents worried about radiofrequency (RF) waves or the city tracking their water usage data.

On Tuesday, city council’s new community growth and infrastructure standing committee voted to recommend all three readings of the opt-out bylaw to council, which will come forward in early December.

The proposed opt-out program would involve city staff taking manual readings once every two months for $35, and on the alternate months residents would be expected to mail or submit online readings for $10 per submission. In total, customers opting out would be paying $270 per year. That does not include any fees incurred for missed submissions or inaccessible meters.

Currently, there are 124 properties in St. Albert without smart meters, according to the city, and 32 of those are hard refusals. The city has been unable to contact the remaining properties.

Coun. Sheena Hughes was the driving force behind the opt-out option and brought the initiative back in May after council defeated the idea in 2018 with a tie vote. Only Coun. Natalie Joly voted against providing an opt-out option when it came before council in May.

Hughes said she is “really appreciative” this council reconsidered their initial position, but the proposed bylaw is not as affordable as she would like. When the bylaw comes to council, she plans to propose amendments to make it more affordable.

“You’re at $300 ... to not have the water meters, and I’d like to see it brought down to something more affordable, so not just the extremely wealth can afford to have this and it doesn’t actually put a burden on families that do have this (electromagnetic frequency) sensitivity,” she said.

The smart meters include installation of an RF transmitter that attaches to the outside of homes. RF electromagnetic fields (EMF) operate at frequencies classified by the Food and Drug Administration (FDA) as “non-ionizing,” similar to the frequency given off by televisions, radios and microwaves.

While some people report sensitivities to electromagnetic waves, the World Health Organization affirms the symptoms people experience but says there is “no scientific basis to link EHS (electromagnetic hypersensitivity) symptoms to EMF exposure.” Instead, the symptoms might arise as a result of environmental factors unrelated to EMF.

Other municipalities that have also switched to a smart meter system have opt-out programs, including Sturgeon County. The county’s program requires residents to phone in water readings every second month for $20 and allow access for technicians to verify those readings.

Hughes said the issue extends beyond water meters, and into respecting individuals rights and freedoms.

“That is why I am so passionate about this, is every time a government takes away an individual’s rights and freedoms, you don’t get it back,” she said. “The only thing now is that we don’t do it as a symbolic gesture, but rather we do it to make an affordable option.”

The switch to smart meters was in part an initiative to reduce water consumption in St. Albert. When asked if the program has accomplished this, St. Albert communications advisor Juliann Cashen said the next phase of the program is to roll out online tools for residents to look at their water usage.

Smart meters have also allowed the city to identify locations where leaks were prevalent, she added, providing forewarning of slow leaks that required repair.