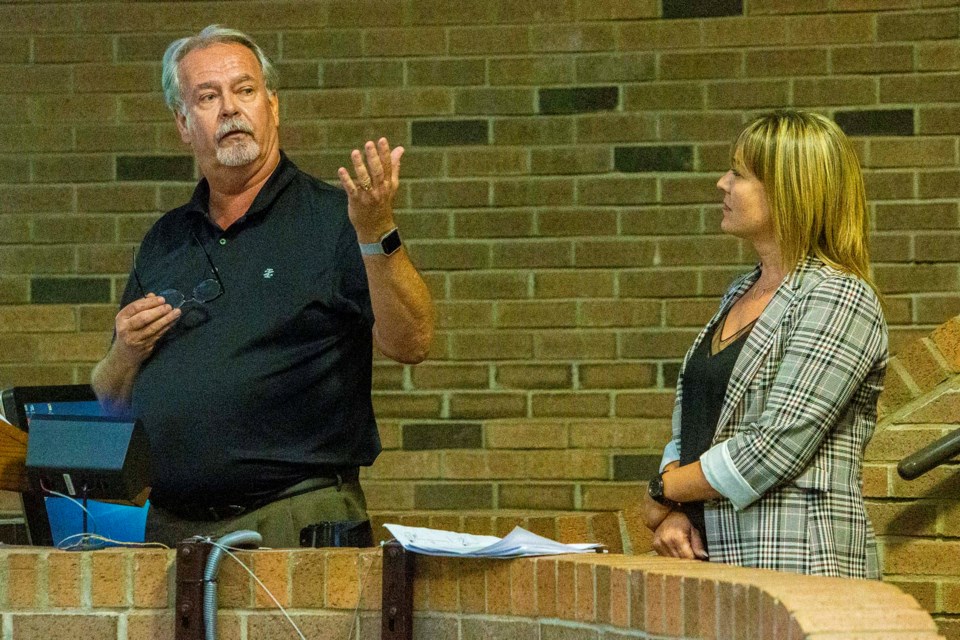 Public support for a new campus-style recreation facility in St. Albert was clear at Monday's city council meeting from the sheer number of speakers who provided input on where such a facility should go.

The city unveiled three options this past week for the facility's location. Two involve land that could be donated by local developers and one is city-owned.

Landrex Ventures is proposing the facility be located on their land in Erin Ridge North, while Rohit Land Development would donate land west of Ray Gibbon Drive, north of the Lakeview Business District. The city-owned option is 71 acres in the Badger Lands, east of where Ray Gibbon Drive meets Villeneuve Road.

While some speakers came out in explicit support of Landrex’s proposal – including Morinville-St. Albert MLA Dale Nally and St. Albert Public Schools – other community groups were impartial to location as long as the facility could meet their needs.

Active Communities Alberta (ACA) has been lobbying council for years to partner on a non-profit recreation facility, and in June 2018 signed a non-binding memorandum of agreement with the city to build a $60-million-plus facility.

ACA president Matt Bachewich reminded council of the ACA’s offer to “save taxpayers millions” by offering a facility run without taxpayer subsidization. The ACA’s agreement with the city outlined plans for the city to chip in $20 million for the facility, while the ACA would secure $10 million each of federal and provincial funding.

Bachewich said a decision on location is essential for ACA to secure that funding.

“City council’s decision to seek out land for campus style community amenities is an important step forward,” he said. “Having a decision on land will strengthen our case for provincial and federal funding. Every dollar we can secure from other levels of government reduces the burden on local taxpayers.”

When asked if the ACA had any preference between the three land proposals, Bachewich said any of them would work. Anything north of the Sturgeon River would provide balance for recreational needs in St. Albert, he added.

Nally suggested St. Albert move ahead with Landrex’s proposal, saying this will be a big project he intends to champion and put his shoulder into.

The MLA said the Landrex location is within his riding, so he has particular interest in that site.

In addition, Nally said a part of the “secret sauce” to making this facility successful is for it to be a regional facility. Its location on St. Albert’s northeast would accomplish that, making it accessible to Sturgeon County, he said.

“Having the right location with access not only to close by residential, but also good proximity to Morinville (and) Sturgeon Couny, it’s going to give you those footsteps and it’s going to help with profitability and funding,” Nally said.

Mayor Cathy Heron asked Nally if there are provincial grants the city could apply for, but the MLA said he did not come prepared to discuss grants and would get back to the city at a later date.

He added the current Alberta government is a “big fan” of collaboration and partnerships.

Part of Landrex’s proposal hinges on having a high school included in the campus-style recreation facility, and St. Albert Public Schools board chair Glenys Edwards said the proposal would be an effective way to provide a “critically needed” high school in the northeast.

Edwards said the school division is in favour of Landrex’s “visionary plan” to place recreation, commercial and residential development alongside a high school.

“A school is a hub in any community, and in this plan our high school can provide energy and the humanity to this mixed-use area,” she said. The adjacent business community could offer dual credit programs for students as well, helping to meet local labour needs while students earn post-secondary credits.

St. Albert Public Schools is currently experiencing “unprecedented” growth in K to 9, and these students will need a high school space to move up into, she said. Landrex is “very sensitive” to the need for a “safe and effective traffic flow” around high schools, and Edwards said they are willing to work with the city to carefully design roads around the school to minimize congestion.

Edwards also touched on parking, which can be a huge issue for high schools. She said Landrex is investigating potential solutions, such as underground parking or a parkade.

Edwards said the public school division has not spoken with Greater St. Albert Catholic Schools about their interest in the school site.

Greater St. Albert Catholic Schools superintendent David Keohane told the Gazette he could not commit to whether the division has interest in the site but confirmed a new high school is not currently a capital priority.

MacIntosh said the association sees “tremendous opportunity” for collaboration with the recreation campus, but indicated they are on a pretty tight timeline. There are 5,500 members registered with the soccer association, and Jahns said already this year they reached capacity in some age groups.

Additionally, this year they were awarded a Canada Soccer National Youth Club Licence, which gives the association an ability to have elite athletes and develop to a national scale. With the licence comes 147 requirements, including access year-round to facilities.

“We are super excited to have it, this is the first year we’re participating in it, but the need for this facility is becoming that much more important for us,” Jahns said.

Jahns said a revelation from the city that none of the proposals would be open before 2025 is news to the association, and they would have to bring that information back to the board.

Aquatics was also on the agenda, brought forward by Marcie Gray and Jeff Arthurs with the St. Albert Sailfish Swim Club. The swim club noted they have also reached capacity for their programs and have a long waiting list.

While Sailfish is a small swimming club, Gray said she feels they represent thousands of St. Albertans who voted in the 2017 election plebiscite that more aquatic space is needed.

“Our purpose for being here, realizing fully that this is about the land, is to make sure the word aquatic appears on the agenda,” Arthurs said. One of three ballot questions in 2017 asked voters whether additional aquatic space was needed for Servus Place, and 12,050 voted in favour, representing 55.7 per cent of ballots cast.