Council to consider letter of support for ACA outdoor facility

Some hesitant on putting St. Albert's support behind non-profit funded project
Feb 22, 2021 11:30 AM By: Brittany Gervais 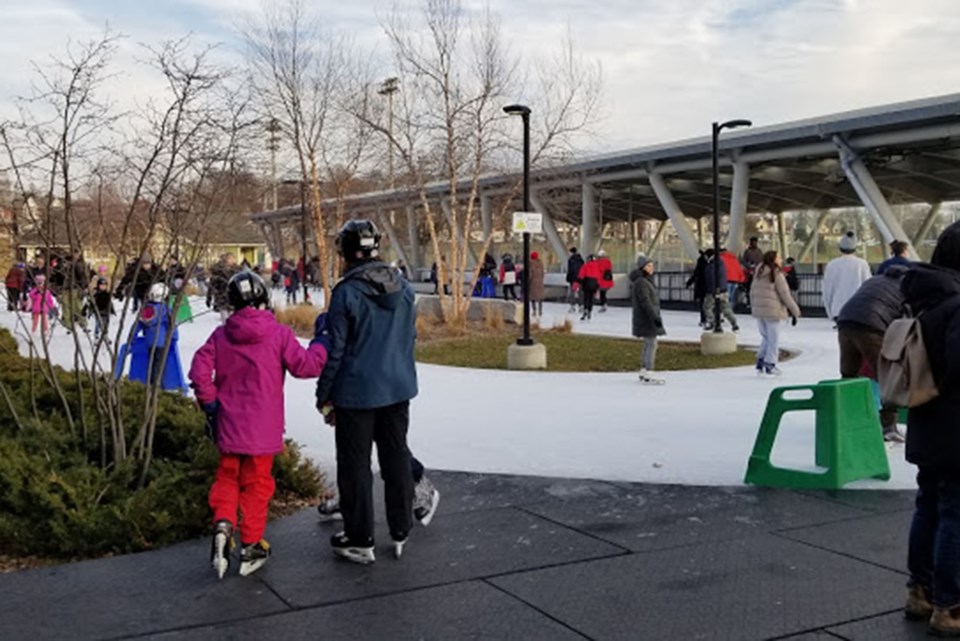 Active Communities Alberta's project for a covered outdoor ice rink would be modelled after Toronto's first ever outdoor covered ice rink at Greenwood Park, pictured behind the skating path. SUPPLIED

Some members of city council are cool on Active Communities Alberta's (ACA) plans to open an outdoor refrigerated and covered ice rink facility in St. Albert.

On Feb. 15, ACA president Matt Bachewich gave a high-level presentation to council about the non-profit's plans for the facility. During the meeting, he asked whether Mayor Cathy Heron would write a support for the project within the next three weeks. ACA's goal is to have the facility up and running by this fall, an "aggressive" but achievable timeline, he said.

"If there is a will, there is a way, and I think if we collectively pull together on it, we can achieve that timeline," Bachewich said.

Spanning between two to three acres, the year-round outdoor facility would have two concrete pads for arena ice or dryland sports. Dressing rooms, a place to warm up, staffing and a Zamboni to resurface the ice are all planned for the site. The project will be funded through sponsorships, grants and donations, not taxpayer dollars, he said.

"Our plan is for this to be entirely operated from our organization without any need for support from the city," he said, noting the group is working with industry experts on the proposal.

Coun. Sheena Hughes asked how ACA would recover money spent on the project. Bachewich said they would not charge for public skating, but would charge sports groups to use ice surfaces, like the City of St. Albert does. Accessing gaming funds, donors, sponsorship and fundraising opportunities will help as well.

"So in fact, this facility would be more accessible to the average citizen than the existing indoor recreation facilities," he said. "We believe firmly that once this facility is up and running, and the community sees the true benefit of it, there will be even more support to contributing financially to it."

When asked by Coun. Natalie Joly, Bachewich said he expects the project to cost between $1.5 to $3 million to complete. So far, ACA has raised $500,000 in donations from St. Albert residents in the last three months, he said.

Bachewich did not provide information on expected operating costs when asked by the Gazette, but said it would be a fraction of the cost needed to run a large indoor recreation facility.

Potential locations are still to be determined, as Bachewich said he met with city administration on Wednesday to talk about potential options. Converting one of the existing outdoor arenas in the city to a covered, refrigerated space would take costs off the city's shoulders, though he said it is important for ACA to ensure impacts to nearby residents are minimal first. If permitted, he said the organization would consider building the facility on private land.

"We're very committed to making sure that this facility is an addition to the public, and not a drawback for them. We look forward to hearing from various residents in terms of their feedback."

Last February, council voted no to taking further action on plans to construct an outdoor refrigerated covered rink due to location concerns and cost implications to the city. In 2017, residents narrowly voted down further planning on a sixth sheet of ice for Servus Place during a plebiscite, with 50.2 per cent against the project and 46.1 per cent in favour.

According to a survey ACA did in 2018, more than 95 per cent of the 151 sports families surveyed agreed there was a shortage of recreational facilities in the city. Nearly all agreed a lack of ice in the city is the main driver for out-of-town practises.

During the meeting, Joly said she would "love to see this in the community," but questioned why ACA needed a letter of support from the city.

Having a letter of support from the local municipality would bolster their applications for government grants, Bachewich said.

"Usually we see a business plan, but all we've seen is a YouTube video," Joly said, and asked for a copy of ACA's business plan. Bachewich said he would share the plan with city council, and would go back to the ACA board to ask if the plan could be released publicly.

Heron said she was hesitant on whether ACA needed a letter of support from the city to move forward. She said she is "supportive of the concept," but she needs more details on the project.

"I feel like you've got the horse before the cart with this," Heron said. "It's going to be really hard for this council to put a signature on a letter when we don't know where it's going and what kind of community support is behind it."

This year, the city will begin a $500,000 high-level concept plan for the new campus amenities site in the city's northwest. During the meeting, Kevin Scoble, chief administrative officer, said it could be easier and faster for ACA to look at private land rather than pursue city-owned parcels.

Given ACA's quick timelines, Hughes gave a notice of motion for Heron to provide a letter of support for ACA's project and confirm the city's commitment to working with the non-profit to progress the project. That will be presented to council on March 1.

"I'm looking forward to seeing the business plan and seeing administration's feedback on it in the next two weeks," Hughes said.

If ACA receives the letter of support by then, Bachewich said that will meet the organization's needs to go after grants.