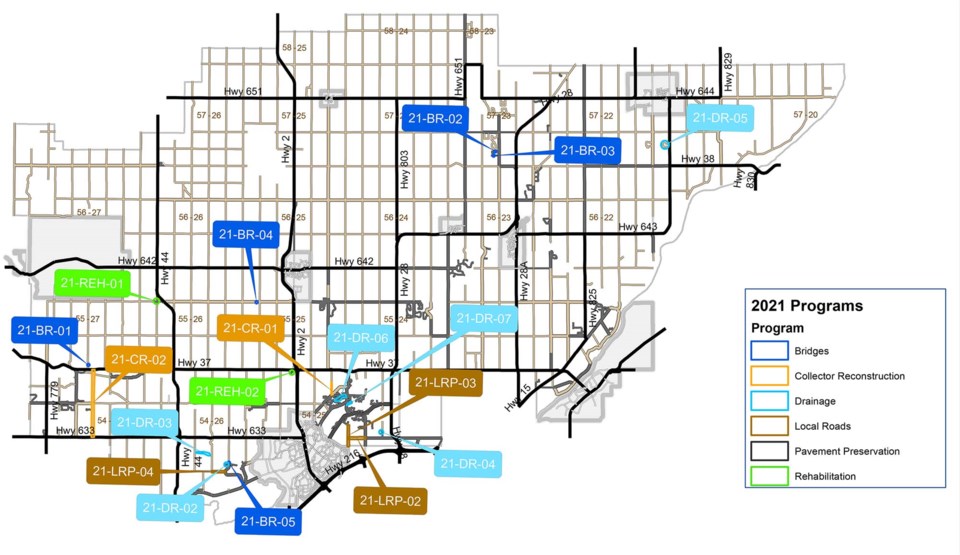 CONSTRUCTION SEASON — This map depicts new road, bridge, and drainage projects slated to start in Sturgeon County this year. Some $37.4 million in work is planned. The letters and numbers in each coloured box refer to project codes listed in the 2021 county budget. STURGEON COUNTY/Photo

Sturgeon County residents should expect a busy 2021 in terms of construction as council triples its budget for roads, bridges and drainage.

County council approved its 2021 budget in December. In it was about $37.4 million for roads, bridges, and drainage – more than three times what the county spent on those items the previous year.

A map provided by county officials suggested about 18 new road, bridge and drainage projects are slated for planning and/or construction this year.

Roads have long been a major priority in the county, and last spring’s floods made it “painfully obvious” that the county had to catch up on its drainage work, Mayor Alanna Hnatiw said in an interview. At the same time, with the Sturgeon Refinery now fully operational, council expects to have up to $30.2 million more tax revenue coming in than it did before, about half of which is to go toward roads and infrastructure under the county’s significant tax revenue growth policy.

“This is money that needed to go to roads very clearly,” Hnatiw said, and the county has about three years of backlogged capital projects waiting for that cash to arrive.

Some $7 million of this money would go toward the reconstruction and paving of Campsite Road near Calahoo, which was a major collector road, said Scott MacDougall, the county’s chief operations officer. Sturgeon Valley, Riviere Qui Barre and Terrault Estates residents should expect about $6.6 million of road reconstruction and rehabilitation this year, as well as a new $2.4-million paved road between the protective services headquarters on Range Road 252 and Coal Mine Road, which should improve response times. ProNorth Industrial Park users should also see the end to weight restrictions/road bans on their local roads as crews get to reconstruction work held over from last year.

A test run last year has convinced administration to put about $2.1 million into micro-surfacing, which is where you shave the top layer of asphalt off a road and put down a new coat to fix minor cracks, MacDougall said. The transportation department also plans to do more shoulder stabilization on gravel roads and to deploy more geocells – 10-inch thick grids that you pack into gravel roads to enhance stability.

The roughly $5 million in the budget for drainage would involve digging ditches, replacing or unclogging culverts, preserving wetlands and other small improvements, MacDougall said. The budget suggested most of this work would happen in West Fairhaven, Villeneuve, Glenview Acres, Waterdale Park and Estate Way. Also included here is $350,000 to realign and repair bank erosion to a trail in Pinnacle Ridge.

Some of this work, such as the bridge repairs, is already underway, while most of the drainage work would start once the ice breaks up, MacDougall said. Expect to see most of the construction signs to go up around April and May.

Budget documents suggest this spending blitz may be something of a one-time blip. Drainage and bridge expenditures are projected to fall by about half to around $2 million each by 2022, while the roads budget would ramp down to about $14.3 million by 2024.

“I don’t think it’s in the interest of the county or the taxpayer to pave every road,” Hnatiw said, adding future councils would have to ask residents how they want to use the growth dollars they get from the refinery.

MacDougall said residents should watch the county’s website and call their local councillors to stay abreast of this year’s construction projects.