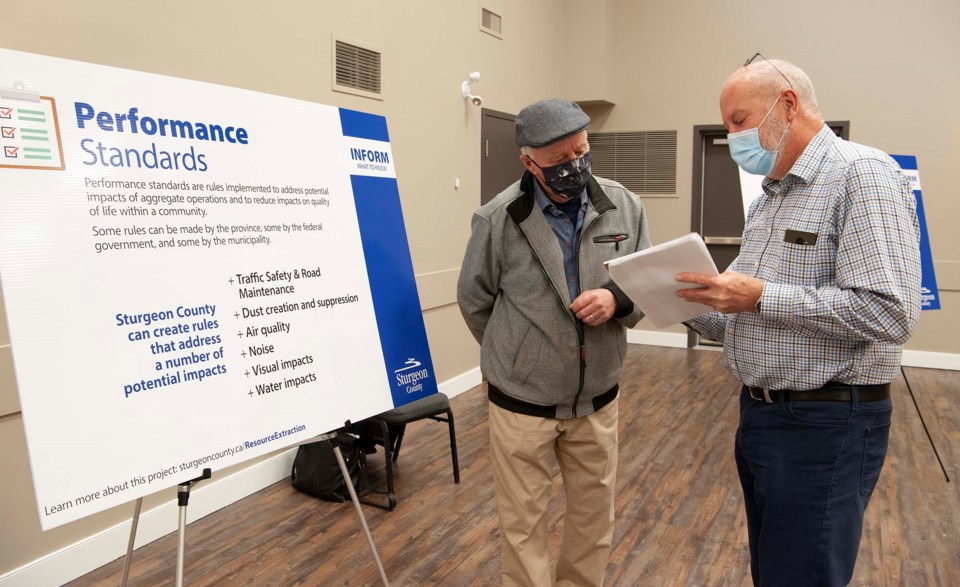 RULES FOR ROCKS — Sturgeon County resident Robert Lupul (left) discusses sand and gravel regulations with Arjen de Klerk of the county's planning and development department at an open house at the Calahoo Community Hall Nov. 5, 2020. About 35 people attended the event, which was about proposed changes to how the county regulated aggregate mining. KEVIN MA/St. Albert Gazette

Sturgeon County residents say they’re open to setting new rules for gravel pits, so long as those rules ensure those pits don’t come too close to their homes.

About 35 people attended an in-person open house Nov. 5 at the Calahoo Community Hall on proposed changes to the county’s sand and gravel regulations. Attendance was tightly controlled due to the pandemic, with guests asked to sign up for specific time-slots.

The county is reviewing its decades-old sand and gravel regulations as it seeks ways to get more money out of its natural resources in the face of a struggling economy and the COVID-19 pandemic.

Sturgeon County Mayor Alanna Hnatiw said the county goes through millions of dollars of gravel a year on maintenance alone and nets considerable funds for community groups through Community Aggregate Payment (CAP) levies on sand and gravel extraction, which the province has currently capped at $0.40 per tonne. The county would lose out on CAP levies without new mines and might have to pay more to haul in gravel from abroad.

“Sturgeon County residents have always made it clear that they want to keep taxes low,” Hnatiw said, and doing so requires either cutting spending or finding new revenues.

Information at the open house showed the county’s current sand and gravel rules regulate aggregate mines mostly through large setbacks from homes – 400 m for mines and 800 m for processors – and do not regulate community consultation. These rules leave little room for new gravel pits in the county but would net it some $14 million more in revenue.

One is to basically keep the current rules. Two propose reducing setbacks to as little as 100 m, which would allow for seven to 55 years of new gravel mines and $26 to $73 million in new revenue. The last proposes to have council regulate mines on a case-by-case basis through direct control legislation, resulting in $59 million in new county revenues and 37 years of mining. All four alternatives include requirements for community consultation.

The alternatives emphasize the use of performance standards over large setbacks to regulate the impacts of sand and gravel mines, such as noise and air quality. Hnatiw said these standards could include requirements to build berms around pits, reclaim pits as they were mined out, or to move sand by pipeline instead of truck.

Robert Lupul, a 33-year county resident who lives between two potential gravel pits near Calahoo, said the county should stick with its current rules. The alternatives would let mines dig as close as 100 m from his home, and opened the door to further reductions.

Lupul also questioned the county’s economic projections for the alternatives, given that the whole province was in an economic slump.

“Where’s the demand for gravel going to be all of a sudden that’s going to make us $75 million?”

Kameil Shank, who lives near a potential sand and gravel site near Gibbons, said he is concerned changed rules would put a gravel pit on his doorstep.

“We moved out to the rural areas to be in that rural aspect of living,” he said, and the current rules protect that life through large setbacks.

Still, Shank said the current rules might be too restrictive in some circumstances – say, if there was a highway or other natural barrier between a home and a pit. He expressed openness to the idea of case-by-case regulation, but wanted assurance that area residents would have a substantial voice in any new developments.

County resident Al Montpellier said he favours the use of science-based performance standards, but wants them combined with a fixed minimum setback of at least 100 m to give homeowners and businesses some certainty.

Council is scheduled to get a report and recommendations based on this sand and gravel consultation this December, and would consider any proposed rule changes next year.