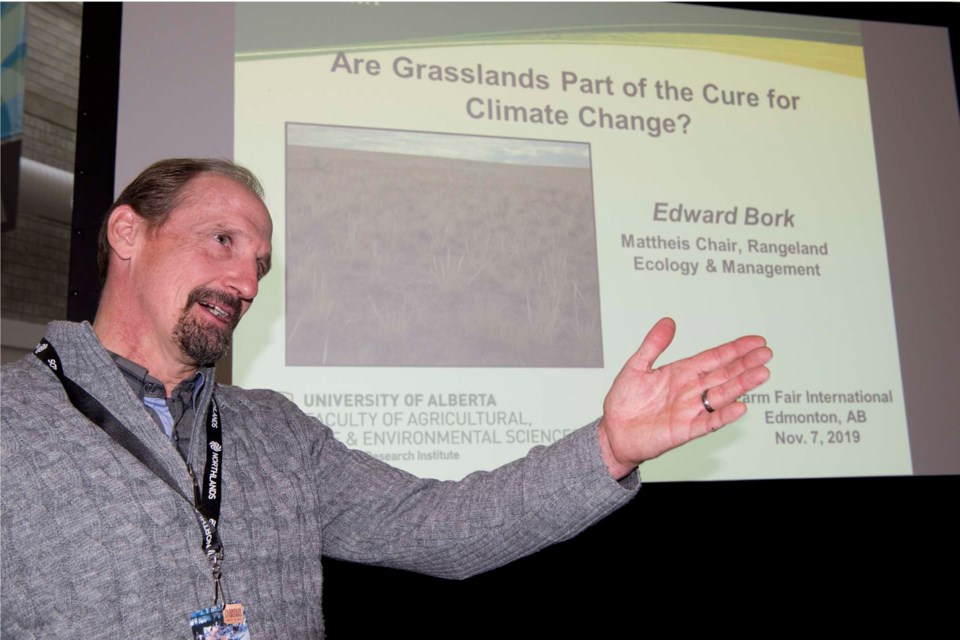 GRASSLAND CARBON – U of A Prof. Edward Bork spoke this week at Farmfair International on grasslands and climate change. Research by he and others at the U of A has found grazing cattle can boost soil carbon storage by 12 per cent in Alberta.

Alberta cows could help fight global heating by boosting the carbon capacity of grasslands, says a University of Alberta researcher.

About 10 people took in a talk by U of A rangeland ecology and management Prof. Edward Bork at Farmfair International in Edmonton Thursday.

Many researchers have called on people to eat less meat, particularly beef, to address the climate crisis, as it has a much bigger carbon footprint than other foods. But Bork said it’s vital to also consider where that beef comes from and how it was produced.

“If it was produced on a grassland, it’s one of the most sustainable production systems in the world.”

Alberta’s grasslands contain at least 70 to 180 tonnes of carbon per hectare, with some of the wettest areas comparable to the Amazon rainforest in terms of carbon storage, Bork said. Convert those native grasslands to crops, and you release 28 to 45 per cent of that stored carbon.

Bork said the effects of grazing animals on carbon storage are complicated and vary between regions. Still, by studying 100 sites in Alberta, U of A researchers have determined that – in this province at least – the presence of grazing animals boosts soil carbon by 12 per cent.

"Grazing may be actually doing something positive in terms of biogeochemical cycling to build more soil carbon."

The big question now is why and how, Bork said. One theory is the cows are acting as glorified composters that speed up vegetative decay. The cows also appear to introduce invasive species like dandelions to grasslands, which might boost carbon storage as they tend to have big carbon-trapping root systems.

Bork said governments should bring in policies to reward farmers who preserve or enhance grasslands, as the carbon stored in them is an ecosystem service that benefits us all. Some European farmers already earn half their income from using farming techniques that enhance such services.

Bork said residents should pay attention to the source of their beef and be willing to pay more to reward farmers who raise cows on native grassland.

St. Albert residents will be front-and-centre next week at a provincial conference on water and wastewater.

About 200 people will be at the DoubleTree by Hilton Hotel in Edmonton Nov. 13 to 15 for the second annual Water Week Conference organized by the Alberta Water and Wastewater Operators Association.

The conference is meant to give people in the water industry a chance to network and learn about the latest developments in water, said Dan Rites, the association’s executive director and past public works official with the City of St. Albert.

Rites said lead will be a hot topic at this year’s conference, as the federal government lowered the maximum acceptable amount of lead in drinking water to five parts per billion from 10 back in March. Alberta Environment officials will speak on what water systems operators need to do to ensure their systems meet the new standard.

St. Albert utilities manager Brian Brost (who could not be reached for an interview) was scheduled to speak on St. Albert’s move to smart water meters.

“If you have good (source) water quality, it costs a lot less to treat it,” she said, and you protect your community in the process.

Cities like St. Albert affect source water through point sources such as sewage treatment plants and non-point ones such as stormwater runoff, the latter of which generally runs into rivers untreated, Kongsrude said.

“The water from your yard and street, it goes to where fish live,” she said, and that affects water quality. Yards add fertilizers and pesticides, parks bring bacteria from dog poop, and streets add salts, leaked oil and other debris.

“One of the simplest things you can do to protect source water is to use conserve water,” she noted, as the less you use, the less you take from lakes and rivers.