CX-9 is an SUV with a sporty flair

Mazda calls the CX-9 the Driver's SUV. I tend to agree it's also better executed in some ways in its exterior and interior design than similar sized SUVs from other manufacturers.
0
Jun 3, 2017 12:00 AM By: Garry Melnyk 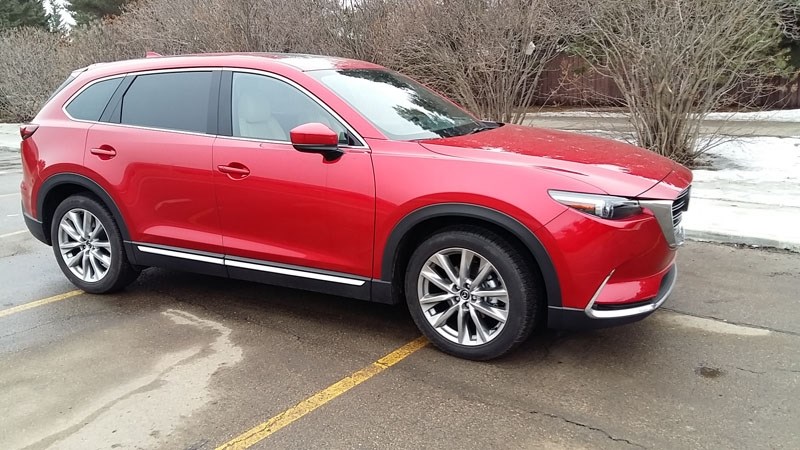 SPORTY SUV – The Mazda CX-9 SUV shines with the handling and attitude of a sports car while allowing the flexibility to transport a family and its cargo.

Mazda calls the CX-9 the “Driver’s SUV.” I tend to agree it’s also better executed in some ways in its exterior and interior design than similar sized SUVs from other manufacturers. The quality workmanship with a sporty flair is very appealing. My GT tester carried an invoice of about $49,000 for a fully loaded three-seat model. The CX-9 sets off its sporty aura with nice exterior styling using tasteful darker lower trim and chrome accents. The “Soul Red Metallic” is the finishing touch. Just the right colour for this rig.

The CX-9 shines with the handling and attitude of a sports car into family transport. If that seems strange consider that, to me, where others of its size seem oafish (that is a word), the CX-9 moves with grace and precision making it feel much smaller than it really is. Personally I prefer driving small vehicles in an urban environment. I’ll make an exception with the CX-9 because it can zip and nip around with ease.

The 2.5-litre, 4-cylinder turbocharged engine puts out a robust 227 horsepower and 310 lb-ft of torque. While you’re not going to win any drag racing trophies, it responds quickly and delivers a surge of easy power. On the downside to me it sounded at times rather coarse and somewhat less refined than what I was expecting. But watching the readout on the instrument panel, fuel consumption around town and out on the highway ranged from 9.2 to 10.4 L/100 km. With just me aboard most of the time that’s acceptable. And on 87-octane fuel too. I still wonder though if you’ve got the family with the gear a family of say, four, brings with them, if the little four-banger is going to be somewhat strained through the mountains. Never mind gulping fuel as the turbo will be spooled up most of the time. Yet it’s also worth mentioning, the CX-9 engine puts out more power than engines found in the Infinity QX 60 and Acura MDX. The V6 is no longer offered.

Mazda designers put a lot of thought into interior design and the result is a cockpit which looks so classy and inviting that you don’t want to leave when the ride is over. Some of the attention to detail includes a hand-stitched steering wheel, the use of genuine rosewood trim, nappa leather and as with my GT model, brushed aluminum trim. The choice of materials and how it all comes together is commendable. In terms of the practical, tall people like me get plenty of leg-room. The second row, with both slide and recline function, is fine for two adults. The third row as you might expect, is a little snug except for little children. The CX-9 lacks in cargo space compared to some of its competitors. But with the second and third row folded, the load floor is flat and there is a shallow bin under the floor. Visibility is great in all directions with large windows preventing anyone getting that closed in feeling.

On the road the turbo engine offers effortless urge right from the get-go. Thanks to clever management of the exhaust stream, the turbo spools up fast and early so turbo-lag is not an issue. The engine is paired to a well-behaved six-speed automatic transmission that shifts smoothly and avoids undue gear hunting. The CX-9 is capable of towing 1,588 Kg (3,500 lbs).

On the open highway the CX-9 exhibits a firm, but not too firm ride and cuts into bends like no other three-row crossover. Driver and passengers enjoy a hushed interior and if enjoying the stereo, a sound quality on par with stereo systems in more expensive vehicles.