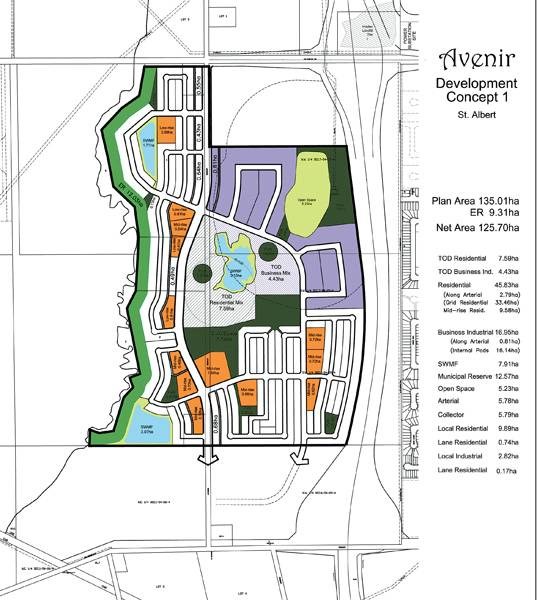 Called Avenir, meaning "future" in French, the proposed development is being touted as a green, campus-style community where researchers and engineers can live, work and play.

"We see Avenir as being that one very large-scale laboratory campus platform, where all those products can be developed, manufactured and distributed [here]," Bromley explained during a recent visit to St. Albert.

The development is still in the concept phase, however early plans estimate up to 10,000 residents could call the area home at full build over 10 years. Avenir would employ 5,000 to 8,000 people, although Bromley has yet to contact potential businesses.

"It will be the largest industrial platform, industrial campus, for clean technology certainly in North America," he said, "and that's what Avenir is all about. It is an economic development project."

Bromley estimates the total value of property will reach $1.2 billion at build out, with a 68-32 split between residential and non-residential development. The mix, he notes, fits with St. Albert's goal to reach an 80-20 tax split.

The development utilizes "smart growth" concepts that promote a more self-sufficient, walkable community. The project already has some fans on city council.

"It's leading edge — a world class innovation," said Coun. James Burrows. "It would be a wonderful thing for our city.

Burrows said he's happy with the early research Bromley has done, but he's concerned St. Albert might have to contend with other municipalities in order to land the project.

"My concern is if St. Albert doesn't do it I'm sure that there's a parade of municipalities in Alberta that would love to have a shot at this concept," he said.

According to Bromley, Edmonton is one of those municipalities. The capital has embraced new growth concepts similar to St. Albert's smart growth, only there they're called smart choices. Bromley has met with Edmonton city officials and said there are two locations in that city that also would work for Avenir.

Bromley said one of the issues he's encountered locally is St. Albert still hasn't approved smart growth concepts for future development. Council recently asked for a fiscal analysis of smart growth, which pushes a final decision to the fall.

"Bringing that together has been a little more of an issue than I thought it would be, whereas in Edmonton it's not an issue, they're there," Bromley said.

There are other issues that need to be resolved to pave the way for Avenir in St. Albert. For starters, the proposed site is located in a future study area within the boundaries of the St. Albert-Sturgeon intermunicipal development plan. Changing the land use designations will require county support.

The Avenir area structure plan would also require approval from the Capital Region Board.

Mayor Nolan Crouse has seen some of the early plans for Avenir, but said it's too early to say if it fits the city's overall goals for that area.

Stage three of Ray Gibbon Drive will also need to be completed before Avenir can be built. Crouse said construction depends on provincial funding and will not begin until next year at the earliest.

Bromley said a more detailed plan for Avenir will be submitted to council in the next few weeks. Although he's entertaining options outside the community, St. Albert is still his first choice.

"The priority is St. Albert, the reason being the demographics are good, we like that rural component and we already own the land. It's easy."