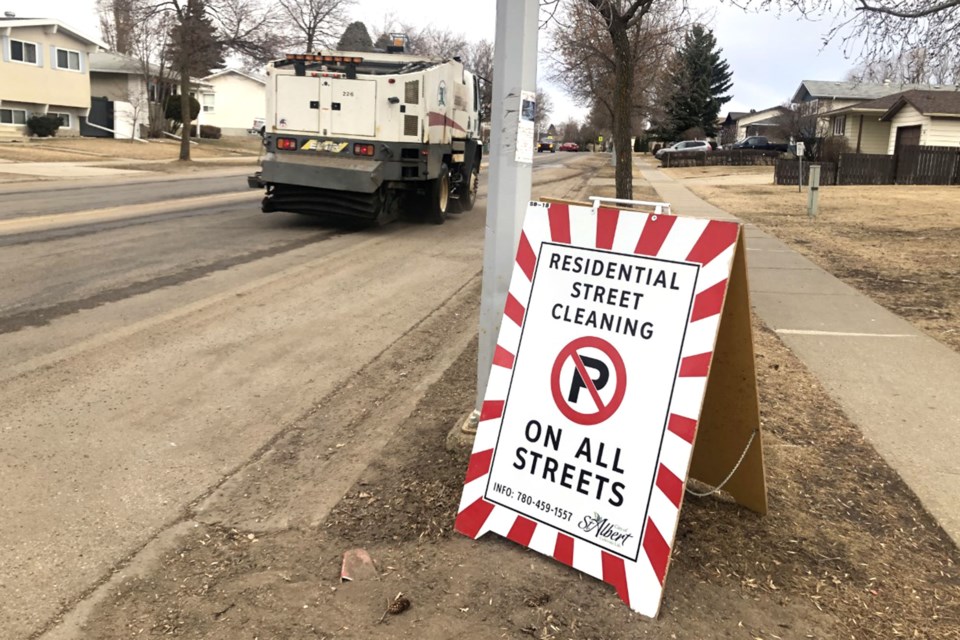 A dry winter and warm spring have let St. Albert’s street sweepers hit the road almost a month ahead of schedule, says the city’s roads manager.

City of St. Albert public works crews kicked off the 2021 residential street cleaning campaign April 7. Sweeper teams and trucks rolled out in Heritage Lakes, Grandin, Akinsdale, Sturgeon, and Forest Lawn before they proceed into other neighbourhoods in the following weeks.

Potter said this was an unusually early start for spring sweeping, which in a typical year would commence in around May 5. He credited the dry winter and warm spring for the fast start.

“As soon as the snow is gone, people want us out there and cleaning.”

The city has drafted two crews of 25 sweepers to collect some 3,000 tonnes of sand and gravel from St. Albert’s streets in the next month, Potter said. That is about 2,000 tonnes less than what the city usually sees each winter — another consequence of last season’s skimpy snowfall.

Residents should expect to see workers using backpack blowers and mower-mounted brushes to spin sand and grit off grassy boulevards for loaders and sweeper trucks to collect from the street, Potter said. Trucks then haul the detritus to the compost depot on Villeneuve Road for eventual landfilling.

The night crew will sweep arterials and collectors from 9 p.m. to 6 a.m. Monday to Friday to minimize traffic disruption, Potter said. Residents who live along such roads should expect to hear the occasional leaf blower, grinding loader bucket, or truck-backing-up beeper as this happened. Crews will finish St. Albert Trail first then fan out to other roads over the next two weeks.

The day crew will clear residential areas from 7 a.m. to 5 p.m. on weekdays, starting with Heritage Lakes and ending in Jensen Lakes. Potter asked residents to watch for warning signs and to remove any cars, basketball hoops, and driveway mats from the street and gutter before crews arrived.

“We want to be able to do a good job in an expedient amount of time,” Potter said, and that means minimizing the number of streets they have to revisit due to cars blocking their sweeper trucks.

Potter said street sweeping should be wrapped up in about four weeks, weather permitting.

“Hopefully we don’t see any more snow anytime soon and we can continue and get it finished up.”

Questions on the street sweeping program should go to Public Works at 780-459-1557. See stalbert.ca/city/public-works/roads/street-cleaning for the residential street cleaning schedule.

St. Albert-area horticulturalist Jim Hole said homeowners could start on spring clean-up in their yards this week if those yards are dry enough. Do some light raking of dead grass on lawns and clip any branches that were broken or infested with black knot disease. Leave your dirt alone, though – it is too early to dig, and you will create clumps and compaction if you do.

While this winter seems to have been an intense one for vole activity, Hole said gardeners shouldn’t worry about the resulting lawn damage, as it will grow back in a few months. Eager gardeners should consider planting cold-tolerant crops such as spinach and parsnip around now.

Megan Evans of the Alberta Native Bee Council recommends leaving your yard messy if you wanted to support wild pollinators. Leaf litter shelters moths and butterflies, while hollow stems or rotten logs host solitary bees. While some websites claim you can avoid harm to wild bees by waiting until a specific date before spring clean-up, that’s not possible in Alberta, as its species nest and hatch throughout the spring and summer.

“If you can leave it, just leave it,” she said of yard litter.