In an effort to escape the rat race, the Stolz family moved to rural B.C. and built their own sustainable, solar-powered home.
Aug 10, 2020 2:20 PM By: April Hudson 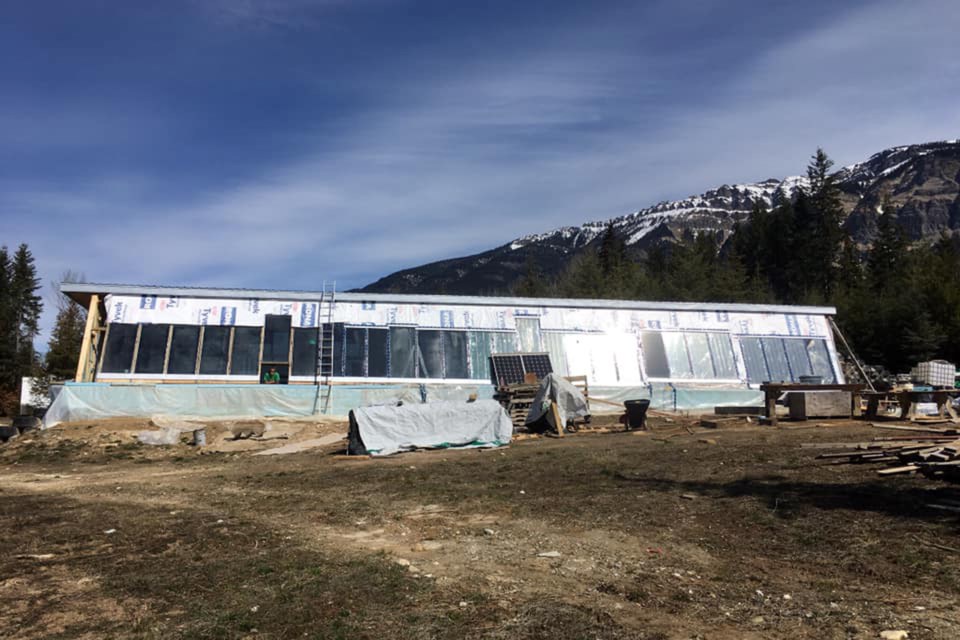 For the past 10 months, the Stolz family has been waking up to earthen floors and cob walls in their hand-built sustainable home near Golden, B.C.

They don’t have running hot water (yet), or a dishwasher (it’s in the wings), but after five years of labour and love, life in their Earthship is off to a great start for the family of four.

Earthships are generally off-grid, solar-powered homes, a design pioneered by architect Michael Reynolds. Jair and Melanie Stolz designed their own, adapting it for the climate around Golden and building it as they could afford to do so.

Although it doesn’t look like your typical home, Jair says life is pretty normal. They’ve got phone service and Internet, heat, light and a big screen TV. They even have flushing toilets.

“I think most people would be pretty amazed at how comfortable and normal the house feels,” he said.

Jair, who graduated from ESSMY in St. Albert, said their journey began about seven years ago when the couple left their home in Golden and bought a rural property about 20 minutes away. They spent their first years on that land in a yurt as they planned their eventual forever home. In October, they officially moved into their Earthship.

The build started with a giant pile of tires, sourced from neighbours and tire shops, and dirt from their own property. Construction began with the help of their two kids, families and an Earthship-building school in New Zealand, which sent about 38 people for the better part of six weeks to help get the Stolz home off the ground. That meant ramming scores of tires full of dirt with sledgehammers, stacking them to form walls – logically called a “rammed-earth build”. Each tire took up to 75 gallons of dirt to fill.

“It was really great to have the extra hands, because it is extremely physical activity,” Jair noted.

It was exhausting work. It was also just the beginning. Over the subsequent years, the walls were covered over with cob, the roof was constructed and the interior of the home began to take shape.

The nearly-finished project comes with a lot of freedom, but also challenges. The Stolz family built it the way they wanted, but the trade-off is they can’t insure it – not that they’re losing sleep over that. The Earthship doesn’t have a lot of flammable materials inside, and flooding isn’t a big risk.

Jair and Melanie initially embarked on this adventure in pursuit of a lifestyle that wouldn’t be tied so closely to the need to make money. Building their own home and living sustainably came with a hefty dose of reality, though – it’s not a simple life by any stretch.

“I think that’s a phrase that we hear regularly … it’s not like that. You’re constantly working, you constantly have something to do,” Jair explained, though that work feels more purposeful and directed than typical urban work.

There’s also always a kilometre-and-a-half driveway to be plowed in winter and a storage shed full of garbage to haul into town. But when things got stressful, Jair pulled through with the love and support of his family.

“For a couple years, I had a really hard time shutting off what it was that needed to happen here,” he said – it weighed on him that his family didn’t have running hot water, for instance.

“My wife was a big part of helping me realize that I wasn’t keeping myself healthy, that I was putting pressure on myself that was unwarranted … My family would constantly remind me, ‘We don’t care – what we do care about is that you’re healthy.’”

Now, Melanie – the breadwinner of the household – is planning to go to school to help take her cleaning business to another level. The family is working to get their greenhouse operational and put the finishing touches on the exterior of the building. They’re also planning to install propane lines to make that hot running water a reality.

As for winter? It got a little cool inside (16 or 17 C) when cold, cloudy conditions stretched on without much sunlight. But during the coldest stretch last winter, when temperatures dropped to -38 C overnight, four or five days of sunshine kept their home at a balmy 22 C inside.

“It was amazing,” Jair said, noting they decided to install some heating elements in order to adjust for their climate.

“They’re infinitely adaptable – it’s one of the beauties of this design … Overall, I’m thrilled with how it’s been performing.”