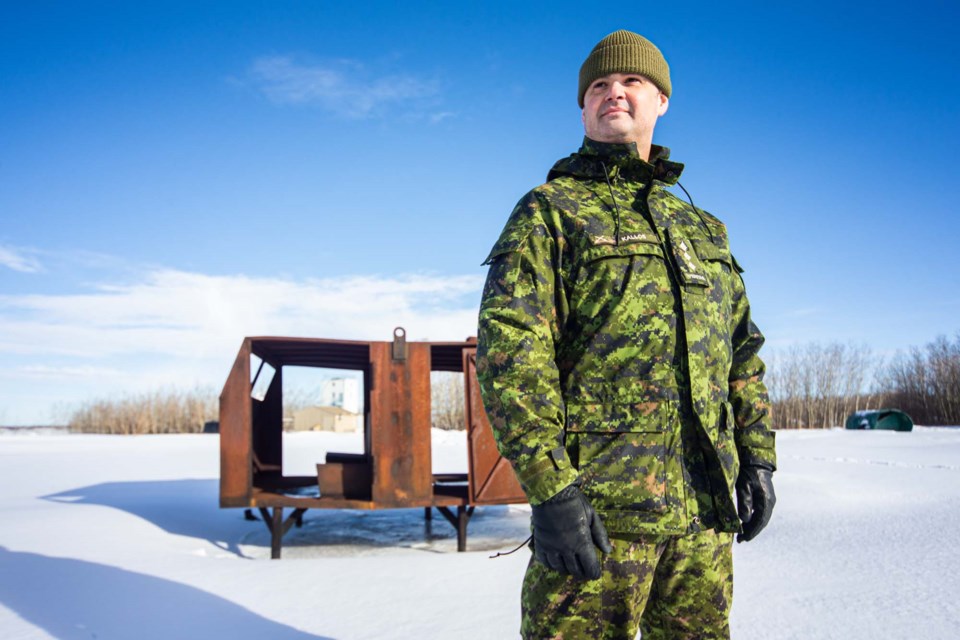 Public Affairs Officer Capt. Graham Kallos stands near a site at the Edmonton Garrison where troops for many decades used foam containing potentially harmful chemicals called PFAS during firefighting practice. Troops are now working with property owners near the base to see if any of these chemicals have contaminated drinking water wells. CHRIS COLBOURNE/St. Albert Gazette

Edmonton Garrison troops are talking to Sturgeon Valley farmers this month about a potentially harmful pollutant that may have leaked into their water wells.

National Defence sent out a notice on Feb. 6 that it was polling residents near 3 Canadian Division Support Base (known to many as the Edmonton Garrison) to see if their well water should be tested for poly- and perfluoroalkylated substances (PFAS).

Commonly used in firefighting foam and water-resistant coatings, PFAS have been known to cause liver damage and neurological problems in rats after long-term exposure, Health Canada reports.

Troops at the garrison have used firefighting foams containing PFAS since the 1970s, particularly at a firefighting-training site near the north end of the base’s runway, said garrison spokesperson Capt. Graham Kallos. While they stopped using the foam in training in 2018, they still use it to put out fuel fires.

The garrison started testing for PFAS in 2008 after the federal government started regulating it, Kallos said. Troops have since found the chemicals in soil, groundwater, surface water and wetlands on and near the base. Last summer, troops detected PFAS at levels slightly above Health Canada’s guidelines for drinking water at the north end of the base, particularly around the firefighting training site.

The garrison now wants to see if this pollutant has spread outside the base, Kallos said, particularly to well water. He added there’s no evidence yet that it has spread to wells.

“What we’re doing is reaching out to our neighbours and determining the actual source of where they get their potable drinking water,” Kallos said.

Once they’ve determined which neighbours get their drinking water from wells, garrison officials will get an analyst to test those wells later this month, Kallos said. Results should be available within four weeks and will be shared with the province and property owners as soon as possible. Once the troops determine where the chemical is, they’ll arrange for alternate water supplies should they be needed.

In an email, Alberta Health Services spokesperson Kirsten Goruk said the garrison is looking for PFAS in surface water, groundwater and private wells, so if you got your drinking water trucked or piped in from a municipal source, you won’t be affected by it. You can safely brush your teeth, wash clothes, shower and bathe in water that contains PFAS as these chemicals stay in the water and cannot be inhaled or absorbed through the skin.

PFAS can become a health issue if you drink water that contains more than the maximum acceptable level over many years, Goruk said. At very high levels, these chemicals can cause high cholesterol, affect the immune and hormonal systems, decrease fertility and alter fetal development in humans. They’ve also been linked to cancer.

While Kallos would not say which neighbours the base had contacted about the PFAS issue, the Gazette reached three property owners near the north and northwest border of the base, none of whom got their drinking water from wells or had any concern about the pollutant.

One of them was Amanda McIntyre of 2BK Vegetable Farm, which is north of the garrison near Namao. McIntyre said the farm regularly tests its soil and as of last fall found no contaminants in it.

“With us not using groundwater and being uphill (from the base), it’s not going to affect us at all,” McIntyre said of the PFAS situation, adding that the farm’s products continue to be safe to eat.

First doses of vaccine expected for all Albertans by early summer
Mar 3, 2021 5:51 PM