St. Albert shoppers can now charge their cars with the sun now that the capital region’s first solar-powered parking lot has opened. The new Simons store in Edmonton’s Londonderry Mall opened this week.
0
Aug 26, 2017 8:02 AM By: Kevin Ma 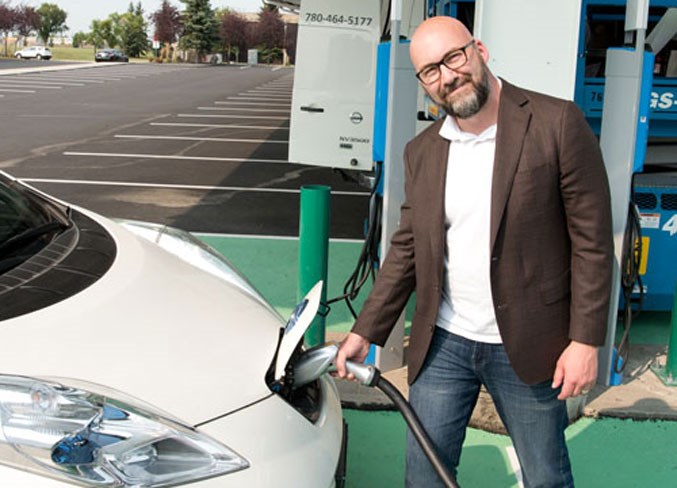 SUN POWER – Clifton Lofthaug of Great Canadian Solar charges his electric car using power generated by the solar parking lot he helped build at Londonderry Mall in Edmonton. The installation is the second such structure in Alberta, and features the first universal Level 3 electric charging station in the province. Lofthaug was the first person to use the charger.

St. Albert shoppers can now charge their cars with the sun now that the capital region’s first solar-powered parking lot has opened. The new Simons store in Edmonton’s Londonderry Mall opened this week. The store has about 996 solar panels on its roof and two Y-shaped solar awnings in its parking lot. Gordon Howell, the engineer who designed this system, said this was likely the first solar canopy parking lot system in central Alberta and the biggest in the province. The awnings are hooked into three electric car charge ports, one of which is the first universal Level 3 port in the province. About 40 people toured the installation Wednesday, including system installer Clifton Lofthaug of Great Canadian Solar (the company behind some of St. Albert’s largest solar arrays). Lofthaug was the first person to charge a car in the lot from solar power, plugging in his Nissan Leaf minutes after the awnings were turned on. “Net-zero commuting!” he said. Peter Simons, president of the Simons chain, said he decided to add this $2 million system to this store after reading The Zero Marginal Cost Society by Jeremy Rifkin and seeing the impact of climate change worldwide. “If we don’t address the problem, we’re going to have a problem,” he said. “All you’ve got to do is cancel out those dirty electrons in the national, global, North American grid, and it’s going to happen one electron at a time.” That starts with conservation, Simons said. By replacing the store’s metal halide bulbs with LEDs, they’ve reduced its power needs by about 45 per cent. Next came the solar, which Howell said should provide 50 to 60 per cent of the store’s power and offset about 350 tonnes of greenhouse gas emissions per year – equivalent to that produced by 37 homes, suggests the U.S. Environmental Protection Agency. These measures mean that the store uses about 82 per cent less power from the provincial grid than the Simons outlet in West Edmonton Mall, Howell said. “It’s a great combination of energy efficiency and solar working together.” Simons said the system would likely pay for itself in about 15 years – faster with the province’s carbon tax.

Power in the shade

The panels themselves are less than a centimetre thick and transparent. From below, they look like a glowing grid of blue-black squares. “They are essentially a window with solar cells between them,” Lofthaug said, which made them challenging to install – he had to hire window specialists. The solar awnings – likely the second built in Alberta (the other is in Fort McMurray) – covers about 40 parking spots each. “What I think is fun is you’re standing under something that’s generating electricity,” Howell said. Simons said he went with the awnings instead of throwing all his solar on the roof because he wanted something eye-catching. “I wanted to have a piece that would inspire and provoke conversation,” he said, and you don’t get that with a rooftop system you can’t see. Simons said he added the car chargers to account for the rise of electric vehicles. These stations will be free to use. The parking lot’s Level 3 port energizes cars seven times faster than the Level 2 ones you can find elsewhere in Alberta and 33 times faster than a household power outlet, Howell said. That’s fast enough to get most cars to 80 per cent in about 30 minutes. Level 3 stations are the key to widespread electric vehicle adoption, said Ben Hartshorn of the electric-vehicle advocacy group Charge Alberta, who was on Wednesday’s tour. Unlike Tesla’s Level 3 stations (which only work with Tesla cars), the one at Londonderry works with any model, including the shorter-range Leaf. Right now, it takes about four days to get from Edmonton to Calgary in a Leaf because you have to use Level 2 chargers, Hartshorn said. With a handful of universal Level 3s, you could do it in one. “It opens up the geography.” Lofthaug said he expects that solar parking lots will become more common in the future. “Combined with the fact that it protects cars from heating up down below, it makes sense.”