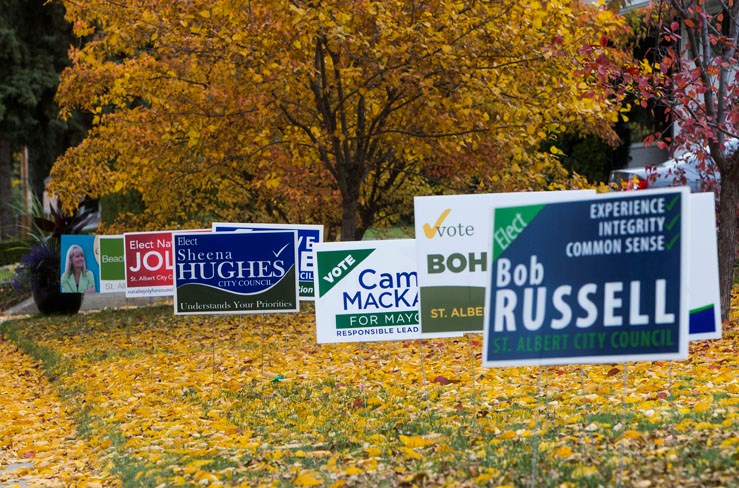 Elections signs blanketed much of the city during the municipal election last fall.

Candidates from the 2017 municipal election had until March 1 to file their financial disclosure statements with the city. While most candidates have filed either disclosure statements or a voluntary statement that they self-funded their campaigns, chief legislative officer Chris Belke said the city has yet to receive anything from candidates Shayne Kawalilak, Nestor Petriw, Bob Russell and Leonard Wilkins.

"The four who have not filed, they may be self-funded but we haven't got anything that tells us one way or the other," he said.

"If their campaigns were completely self-funded, they're not required to submit a disclosure statement."

Alternatively, if they did not self-fund their campaigns, they can file late financial statements within 30 days, as long as they pay a late filing fee of $500.

Aside from Ken MacKay, three other candidates signed voluntary statements that they self-funded their campaigns: Craig Cameron, Gilbert Cantin and Barry Zukewich.

MacKay said although self-funding the campaign cost him more than he had planned, he would do it again.

"For me, it was just a cleaner way of doing it," he said.

"I didn't want to tie myself to any particular area. I wanted to say, 'This is me, this is Ken MacKay' ... and I wanted to make sure it was my campaign and I didn't have any outside influence.

"I thought it just showed my commitment to my community, that I would fund it myself."

Along with expense and revenue disclosure, candidates submitted lists of people, organizations and businesses which contributed to their campaigns either through cash or in-kind donations.

The most prolific contributor for campaigns where the candidate got elected was Genstar Development, which donated $1,000 to each mayoral candidate and $500 to several council candidates, including Wes Brodhead, Sheena Hughes and Ray Watkins.

Six campaigns ran surpluses, ranging from more than $1,300 down to a matter of cents.

Belke said candidates will have to cut the city a cheque for the surplus amounts, which will then be held in trust in case they decide to run in the next election.

"It's money ... that was donated to them to fund a campaign to elect that person," he said.

If candidates do not run in the next election, the surplus is either donated to a registered charity of their choice, or they can choose to donate it instead to the city.