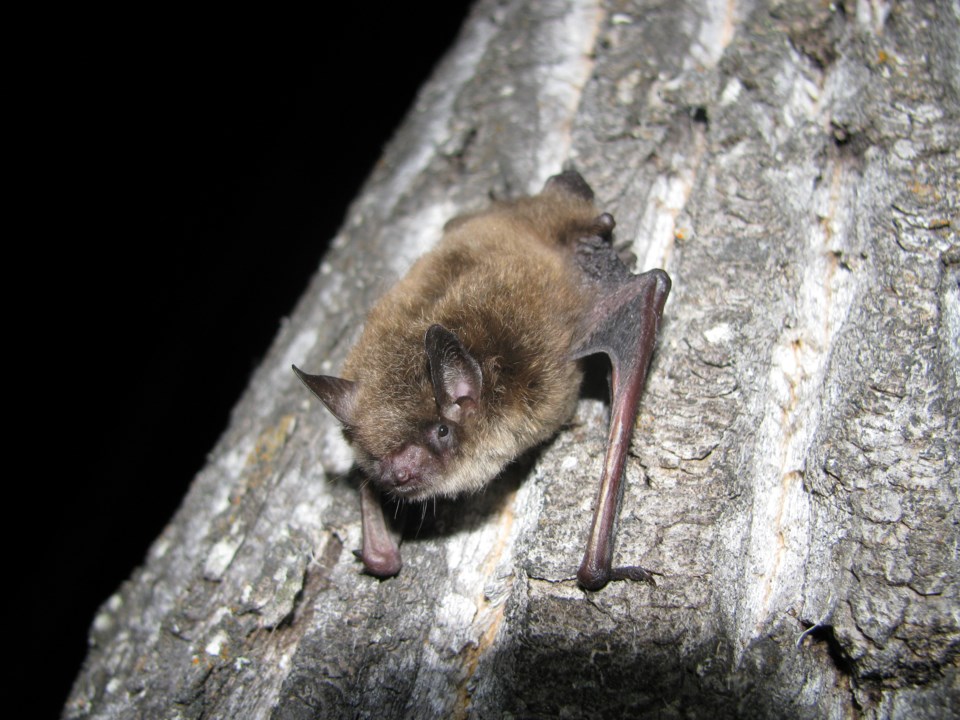 BRUCE WAYNE? – A typical Little Brown Bat. Nature fans can see and hear these ultrasonic bug assassins next week during a free talk on bats at the Wagner Natural Area. CORY OLSON/Photo

Nature fans can hang out with Batman’s extended family next week as part of a free talk on bats.

As part of it, Cory Olson of the Alberta Community Bat Program will break out some high-tech bat detectors so guests can “hear” the ultrasonic cries of bats as they soar through the night.

“They’re the ultimate insect control species,” he said of bats, and an essential one in Wagner, where all pesticides are banned.

Olson said his group is organizing talks like this to raise awareness of Alberta’s bats, many of which are in danger due to white nose syndrome – a fungal disease that’s decimating bats across Canada.

“It’s not in Alberta yet, but we know it’s probably going to get here,” he said.

Olson said bats are actually one of the most common animals around in cities, but unless you’re out at night, you probably won’t see them. The one you’re most likely to encounter is the Little Brown Bat, which hangs around lakes and rivers but often overwinters in buildings. This bug-eater poses no threat to humans, but is also one of Alberta’s most at-risk bat species.

“Bats are actually quite vocal,” Olson said – they’re one of the loudest animals around – but we don’t normally hear them as their voices are ultrasonic.

After giving a talk on bats, Olson will hand out the bat detectors, which are basically audio recorders with a sound processor. The devices convert bat cries into frequencies humans can hear, allowing us to listen in on bat-chatter and (with the help of an app) identify a bat’s species. You might not get a good look at the bats due to their speed, but you should be able to see them swoop about.

The bat walk starts at 9:30 p.m. June 14 at the Wagner Natural Area. Ealey said he expects about 50 people to come out to this event, and asked guests to email [email protected] to register. Guests should come prepared for mud and mosquitoes.

The Edmonton and Area Land Trust received an Emerald Award from the Alberta Emerald Foundation on June 4.

The Emerald Awards are Alberta’s highest honour for environmental excellence and are meant to celebrate environmental champions, said foundation executive director Gregory Caswell. The land trust got the nod this year for its 10-year effort to protect one of the most diverse landscapes in North America.

The land trust has secured 12 significant natural areas around Edmonton in the last 10 years that cover some 2,200 acres, including the 80-acre Boisvert’s Greenwoods forest near Morinville, said group spokesperson Rebecca Ellis. All these sites are either now, or soon to be, open to the public.

“Edmonton is the second fastest growing region in Canada and natural areas are being lost at a very quick rate,” Ellis said.

Those natural areas provide us with vital ecological services including clean air and water, carbon storage, wildlife habitat, and recreation, Ellis said. The land trust serves as a steward for natural areas donated to it and promotes the value of land conservation.

“Land conservation at its heart is about people,” Ellis said.

Ellis said the land trust was honoured to receive the award and proud of how far it had come since it was founded 10 years ago.

Visit emeraldfoundation.ca/28th-annual-emerald-awards for the full list of this year’s winners.