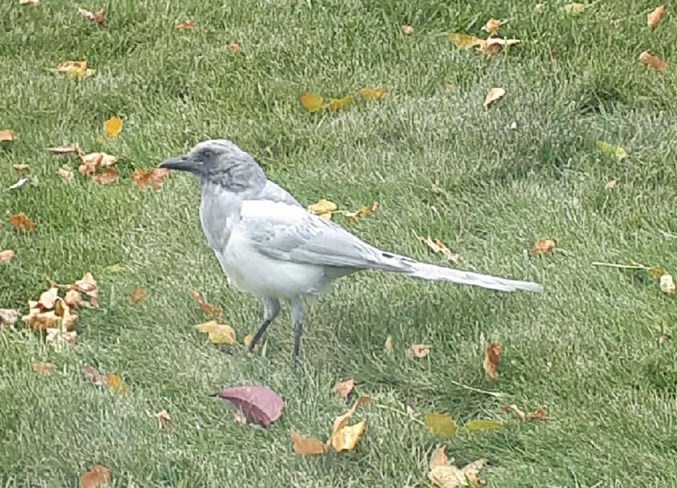 SPOOKY BIRD — Grandin resident Dustin Solomon spotted this ghost magpie near Grange Drive earlier this week. Ghost magpies are birds with a rare genetic quirk that makes them grey where they should be black.

City residents will have to start sending their glass to the depot and their Pringles cans to the trash as of November.

City council approved changes to St. Albert’s blue bag recycling program Monday. As of Nov. 1, any blue bag that contains glass, single-serve cups (plastic or paper), plastic clamshells (for fruit or pastries), spiral-wound containers (Pringles and coffee cans) or non-deposit tetra packs (such as for soup stock) will not be picked up at the curb.

The changes were prompted by recent moves by China (the main buyer of recyclables) to lower its tolerance for contaminated materials in its recyclables, said city waste diversion program supervisor Olivia Kwok.

“With global markets changing, we want to make sure the materials are clean.”

Council heard that the city’s blue bag contractor, GFL Inc., will soon start charging St. Albert $35 extra per tonne to sort its recyclables to new international standards, which would tack an extra 55 cents onto the typical monthly solid waste bill. The materials now banned from the blue bag are ones that cannot currently be marketed.

With the exception of glass, all these banned materials should go in the trash, Kwok said. Glass jars will be accepted at the recycling depot if they’re clean and dry.

“We don’t want to see pickle leftovers,” she said.

Kwok encouraged residents to reuse their jars to store items, adding that Bulk Barn also lets you bring in jars to use for their products.

The city will have to stockpile glass jars at the depot until the city finds a company willing to accept them, council heard.

Mayor Cathy Heron said that the glass jar change was “kind of a step backward,” but encouraged residents to bring their jars to the depot.

“Just because the blue bag was the most convenient route (to recycle) doesn’t mean it’s the best route.”

Kwok said residents would get door-hanger reminders in late October if their blue bags contain unacceptable items. Starting Nov. 1 those bags will be tagged and left on the curb.

Although glass and plastic make up about 10 per cent of residential waste (according to Alberta Environment), Kwok said it’s unclear how removing them from the blue bag would affect the city’s waste diversion rates, as doing so could cause people to buy less of these items.

Visit stalbert.ca/waste for details on the upcoming changes.

Grandin-area residents were aflutter this week over sightings of a rare ghost magpie.

Multiple Grandin residents contacted the Gazette this week to confirm that they had seen an odd-looking magpie near Grange Drive. It looked exactly like a regular one, but was light grey where it should be black or blue.

Dustin Solomon said he saw it on the ground as he was pulling up to his home earlier this week.

“I knew when I saw it up close that it was something special,” he said, so he took some pictures. When he showed them to a friend, the friend identified the bird as a ghost magpie.

A ghost magpie is a magpie that has imperfect albinism, which is where the bird has a shortage of dark melanin in its feathers due to a genetic quirk, said Jocelyn Hudon, a Royal Alberta Museum ornithologist who has researched such birds. They’re not true albinos, as they still have some colour to them, and they don’t have leucism, which would give them regular but blotchy colours. They’re also distinct from the more common brown magpies that frequent Calgary.

Ghost magpies are fairly rare, with maybe a dozen of them in the Edmonton region at any one time, Hudon said. (The last sighting reported in the Gazette was in 2006.) They’re well established here, having been spotted around Edmonton as early as 1946, and have more recently been spotted in Saskatchewan.

Hudon said that scientists have yet to determine which gene causes this ghostly colouration, and that he’d love to get a blood sample from an affected bird. He encouraged residents to contact him at the museum with any reports of ghost magpies.