Alberta Environment comes to St. Albert to talk to anglers as city officials talk electric buses in this week's Environment File.
Jan 20, 2020 10:00 AM By: Kevin Ma 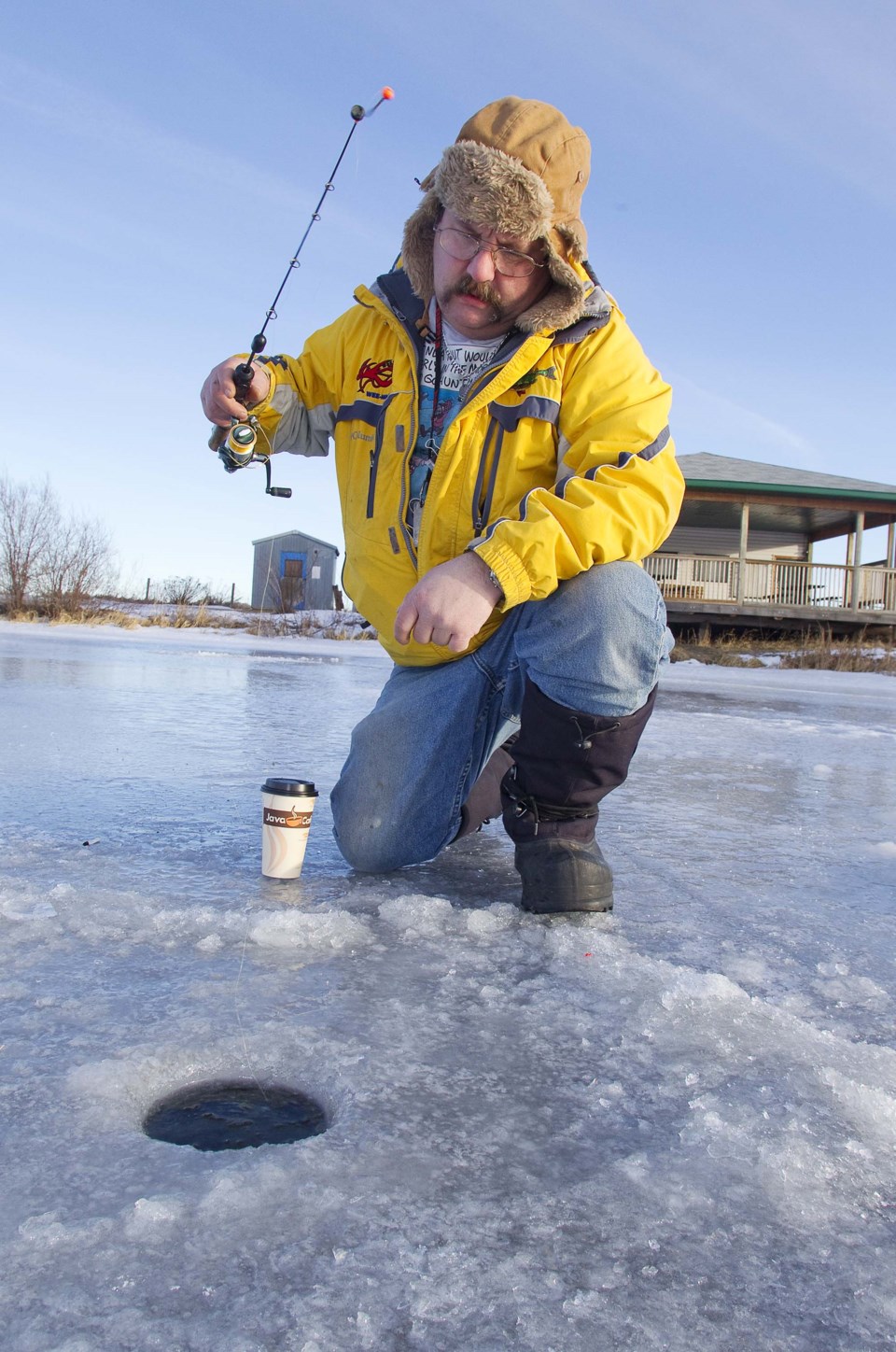 FISHING FOR IDEAS – Edmontonian Paul Chalsson used his vibrating fishing pole to lure trout to his line as he took in a little ice fishing in Morinville in this 2012 photo. St. Albert-area anglers can come to an open house this Jan. 22 to help set this year's fishing regulations. CHRIS COLBOURNE/St. Albert Gazette

Anglers will be at the St. Albert Inn this Wednesday to help decide the future of sport fishing in Alberta.

Alberta Environment is hosting an open house Wednesday, Jan. 22, at the St. Albert Inn on proposed changes to Alberta’s sport-fishing regulations. It’s one of 11 such events being held across the province.

“What we’re looking for is a bit of a conversation with anglers in Alberta on what could be different for fishing,” said Travis Ripley, executive director of Alberta Environment’s fish and wildlife policy branch.

Ripley said fisheries spokespersons would present six ideas that could create more fishing opportunities in the province and the pros and cons of each. These ideas can also be reviewed in an online survey.

One idea was to restart the walleye lake-stocking program, which hasn’t been run for decades. The survey suggests this would see walleye from Lac Ste. Anne and Buck Lake used to populate 28 other lakes. (Lake Wabamun was restocked with walleye in this manner in 2014.) It would take about five years for the fish to mature to harvestable size. The survey noted this program could negatively affect native walleye populations and spread invasive species.

Ken Crutchfield, who retired as Alberta’s executive director of fisheries management in 2010, supports this idea but said the province needs to do lake-specific consultations before it rolls it out. Walleyes are predators that can disrupt food webs, and not everyone wants them in their lake.

“I’m in favour of restocking, but let’s be smart about it,” he said.

Jack Reader of the Morinville Fish and Game Association said he favours the province’s idea to introduce more fish varieties, particularly the tiger trout, to lakes such as Heritage Lake by Morinville.

“They are a more aggressive trout,” Reader said of the tiger, and they could help gobble up unwanted northern pike in Heritage Lake.

Ripley said officials would take comments from the open houses and incorporate them into this year’s fishing regulations, which will come out April 1.

Albertans can also take an online survey on the open house ideas at talkaep.alberta.ca/aep-fisheries-management.

St. Albert’s electric buses will be front and centre next week at a free talk on Alberta’s greenest communities.

About 100 people are expected at a free talk Jan. 23 hosted by the Solar Energy Society of Alberta (a.k.a. Solar Alberta) on Alberta’s Greenest Cities.

The talk comes about a week after NASA researchers determined 2019 was the second-warmest year on record and the 2010s were the warmest decade on record.

“It’s important for Alberta to be seen as a leader and not a laggard at this time.”

Thibault said it is important for Alberta’s municipalities to pick up the slack when it comes to energy efficiency now that the province has rolled back many of its own efforts. Edmonton has declared a climate emergency and set out an ambitious plan to help keep the world below 1.5 C of warming, for example, while St. Albert has shown leadership by buying electric buses. This local action gives the energy efficiency industry much-needed stability and creates more local jobs.

Thursday’s talk will see experts from Leduc, Edmonton and Drayton Valley talk about what their communities have done to address global heating. City of St. Albert fleet manager Tom Kumka will speak on his city’s electric bus fleet and the large solar array atop the Dez Liggett Transit Facility in Campbell Park.

Thibault said he hoped the talk would show guests what municipalities can do for the climate and what they could do in their own communities.

The talk is from 6 to 8 p.m. Thursday at MacEwan University’s Triffo Theatre, and will also be livestreamed on Facebook. Visit solaralberta.ca for details.