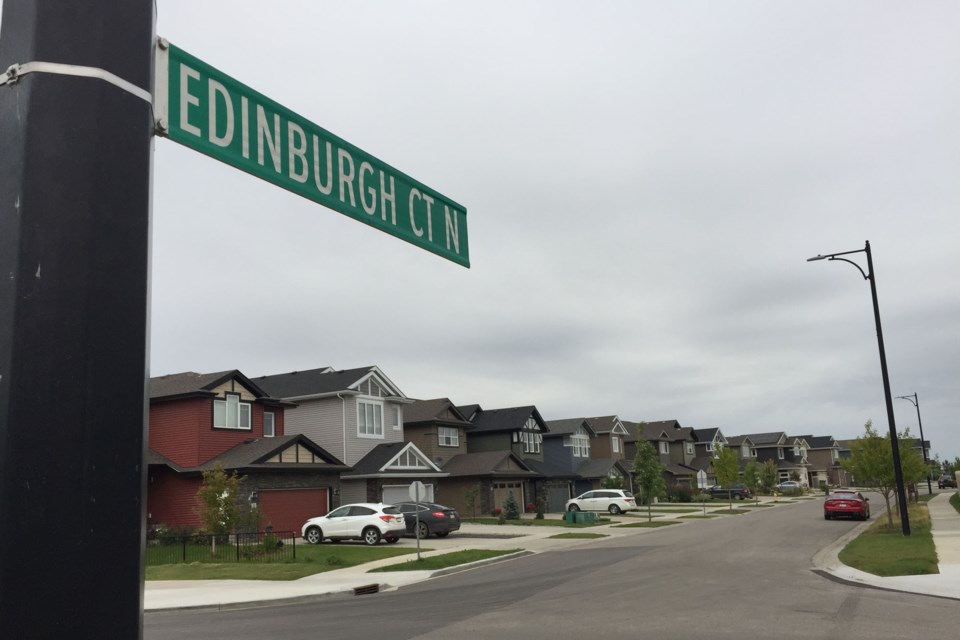 Residents living on Edinburgh Court and the adjacent Etoile Crescent in North Erin Ridge haven't given up their fight against a proposed new neighbourhood development that would have access to it at the end of the two aforementioned streets.

Despite facing a wall from the city, Erin Ridge North residents are continuing to “keep the heat” on city officials in what they say is a fight for their children’s safety.

About 45 residents turned up to a concerned citizens meeting at Lois E. Hole School Aug. 20 to keep the momentum in opposing current designs of a bare land condominium development proposed in the area.

The ends of Edinburgh Court and Elise Place are set to be bulldozed to allow vehicle access to the 59-unit development. The two streets, which currently appear as cul-de-sacs, empty onto Everitt Drive just in front of Lois E. Hole school.

Residents argue the area is already inundated with a dangerous amount of traffic, especially during school hours. Increasing traffic in the area will only serve to exacerbate an already dangerous situation, they say.

Instead, residents have proposed the developer use Neil Ross Road to the north as an access point. The road currently dead ends after running alongside Costco and is set to connect with 127 Street out of Edmonton by 2028.

On Aug. 12 Erin Ridge North residents were given a chance to voice their concerns to St. Albert city council during a governance, priorities and finance committee (GPFC) meeting, before the city’s subdivision authority made a decision to divide the 2.3-hectare parcel into units.

That decision was supposed to come out by month’s end but has not been publicly released yet.

At the GPFC meeting residents heard from city administration there was no way to reverse the development’s approval, and it is no longer a governance matter. That means council cannot stall or halt the development, because the developer already met all requirements for council approval through public engagement in 2010 when the Erin Ridge North Area Structure Plan (ASP) was approved, administration said.

Kari McKnight, lead organizer for the residents, said she and her neighbours will continue to pressure all parties involved to change the condo’s access point. That includes attempting to bring the condo’s developer to the table to investigate possible solutions, investigating legal recourse as well as continuing to lobby council.

“As along as we keep the heat, I think they honestly just want us to go away. So as long as we’re keeping the momentum and keeping everyone engaged, we’re at a bigger number. As long as we have those numbers behind us then people pay attention,” she said.

Coun. Ken MacKay said in an interview he is continuing to explore options, and that includes seeing if Neil Ross Road could be built sooner, or even just a portion of it.

“I think if we can get Neil Ross Road at least built out through Range Road 544, it just makes sense to me that we’d be able to alleviate some of that traffic,” he said. MacKay expressed doubt about this option, because economies of scale would not be applied to extending a road only a few hundred metres.

MacKay said it would be “interesting” if there was already another developer in the area the city could partner with to fast track construction of Neil Ross Road.

During the Aug. 20 meeting at Lois E. Hole School Landrex Ventures president Ryan Andrews was present and spoke about a possible synergy between Landrex and the residents’ campaign.

In October the land development company submitted a proposal to city council to donate land for a recreation facility, to be built in co-operation with the YMCA and Active Communities Alberta.

The City of St. Albert has made no commitments yet on the proposal, and administration is still investigating land options for the proposed recreation facility.

Andrews suggested the recreation facility could end up on a parcel of land that abuts the condominium development, across from the future Neil Ross Road. If that happened, opening Neil Ross Road for access could be beneficial from multiple angles. He said he would be meeting with the condominium's developer to talk about options.

Andrews refused an interview and did not respond to follow-up questions sent by email.

MacKay confirmed the city is still looking at land options for a recreation facility and said if Landrex is in the mix “that might be a possibility."

“Ultimately that might be a great solution for everybody, because we know we need additional rec facilities sooner or later, but again nothing is immediate,” he said. “We’re still years away from accomplishing that.”

City administration also expressed opposition to using Neil Ross Road as an access point, because it is set to be an arterial road with limited access points off it.