Examining the merits of free rides for all 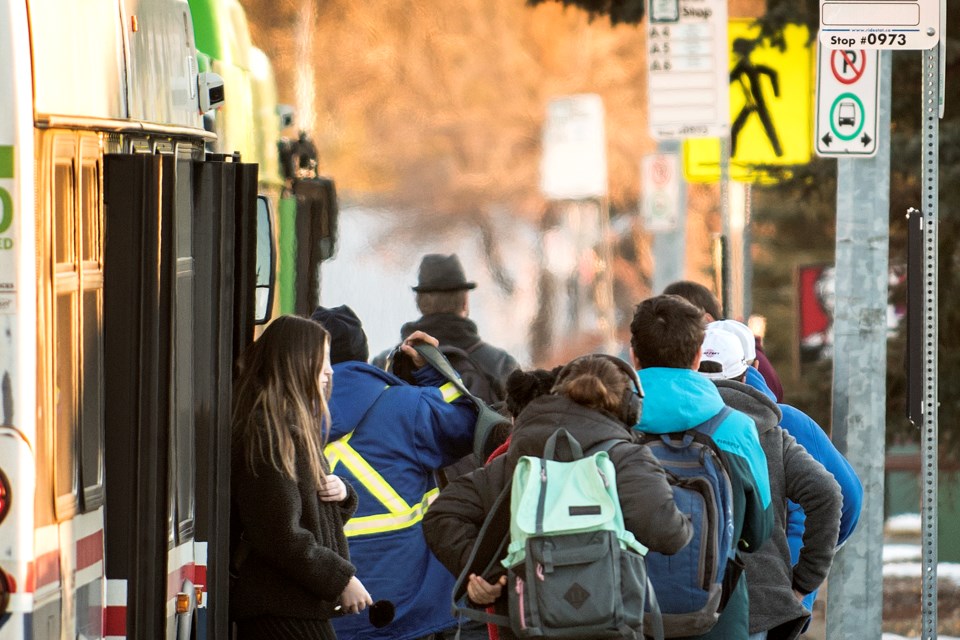 Young people disembark from a St. Albert bus at a bus depot on Rivercrest Crescent in St. Albert November 28, 2018. The city has been allowing youth to ride for free as part of a pilot program.

Mayor Cathy Heron is playing with the idea of allowing all residents to ride St. Albert Transit for free within the city.

During a committee discussion around a free transit pilot for seniors, Heron asked her council colleagues if they would be willing to support making St. Albert’s bus system fare-free for local routes.

“It would cost us, but maybe that's something we need to look at,” Heron told the Gazette during a year-end interview last week. “Every time you get one person on the bus, that's one car off the road.”

She also noted St. Albert would be the first municipality in the region – perhaps in Alberta – to provide free transit service.

Costs would be in the ballpark of $286,000 to provide free local-only transit, according to an information request by Coun. Natalie Joly during budget season last fall.

The topic came up this past Monday while city council’s community growth and infrastructure standing committee discussed a motion by Coun. Ray Watkins proposing a one-year free transit pilot for seniors, similar to the one currently offered for youth.

A pilot project to offer free local transit to seniors over the age of 65 would have an estimated impact of $44,700, an administrative background said.

“When you look at $44,000 you might as well just make it free for all,” Heron said during council’s community growth and infrastructure standing committee on Monday.

The cost estimations are based on local-only, and administration said 83 per cent of rides on St. Albert Transit are purely local. Additionally, 77 per cent of transit riders are over the age of 65.

No committee members indicated support for or against the proposal, but Coun. Wes Brodhead expressed concern about how similar pilots have worked in other communities.

“How do you manage behaviour on the bus, because ... you got people riding around, there’s no way to get them off,” he said.

Watkins’ proposal to pilot free transit for seniors will be debated by city council, after the committee unanimously recommended approving the pilot.

Speaking in support of his motion, Watkins said when the city started its seniors advisory committee, free transit was something they asked for.

“I would just encourage you to give it a shot here, and let’s see where it goes; maybe we can help out some people who really need to get a ride,” he said.

St. Albert Transit manager of planning and customer service Will Steblyk said if council makes Handibus services free for seniors, other users of Handibus services will likely express a “strong desire” to get free rides too.

Brodhead supported the motion but said while a pilot would certainly be a boon for some seniors, they are likely among the richer demographics and “can very well afford” to ride the bus.

“I don’t think age is a differentiator of means in our community like it was in the past,” he said.

If council approves the seniors transit pilot, seniors would join youth as the second demographic the city is targeting to test-drive free local transit. The youth pilot began last March, and during budget deliberations council decided to extend it until the end of 2020, which is estimated to cost $19,000.