"She's the light of my life," Maione, five-year-old Clara's respite nurse, said. "Ever since I worked with her when she was little, I've seen so many progressions. She is thriving." But an upcoming amendment to the city's face covering bylaw requiring masks, not face shields, would change Clara's ability to communicate.
Oct 14, 2020 5:40 PM By: Brittany Gervais 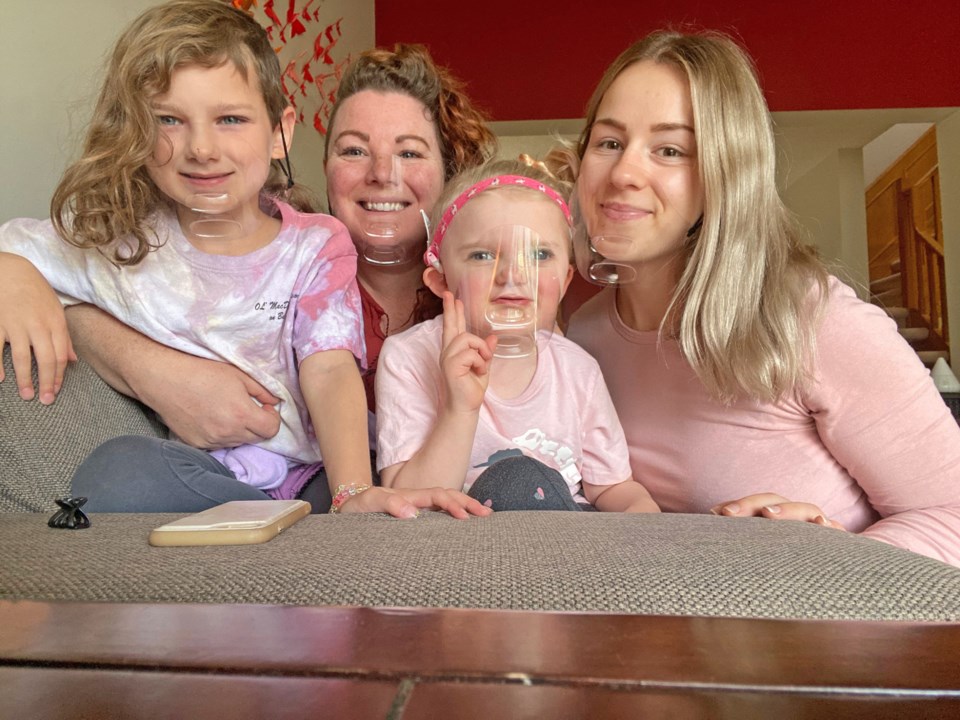 Diagnosed with CHARGE syndrome, a life-threatening genetic disorder causing hearing loss, Clara's ability to read lips and facial expressions is essential for her to communicate with others.

"Wearing a shield in public places gives me the ability to make my daughter feel safe, to give her a space to communicate her ideas, and to let her know that it's OK – that her deafness is part of who she is, and she should be proud of that," Louise said.

She said her family tried to wear masks with a clear plastic section over the mouth, but the design created a suffocating suctioning effect. Now, Louise wears a clear plastic face covering called the Mingle Mask that fits more snug to her face than a typical face shield, while still allowing her to communicate with her daughter.

"She has to work so much harder than a hearing person to understand what is being said to her. And she works even harder to communicate her ideas to a hearing person, because she can't talk clearly. She uses a lot of her own facial expressions and is a very animated child to get her point across to a hearing person. She is the master of charades."

Last week, city council failed to reach unanimous consent for all three readings of an amendment to the mask bylaw that would no longer accept face shields as adequate face coverings. The fine for breaking the bylaw is $100.

This change was based on a statement from Alberta Health Services about a lack of evidence for whether face shields alone can adequately protect others from respiratory droplets, according to the agenda backgrounder.

A 2016 review on face shields for infection control found while plastic face shields can provide a barrier to expelled bodily fluids, it can still allow for aerosol penetration because it doesn't fit snug around the face. The paper concluded face shields shouldn't be used alone, but rather in conjunction with other personal protective equipment.

The U.S. Centres for Disease Control also does not recommend the use of face shields as a substitute for masks, but people who are deaf or hard of hearing – or those who care for or interact with a person who is hearing impaired – should "consider using a clear mask" instead.

The decision will come back to council on Oct. 19.

Louise said she did not know about the amendment until it was presented to council, and has since written letters in protest to all city councillors.

However, Louise said the onus is left on families to explain to other people why they're exempt.

"I don't walk around with Clara unless I absolutely have to – we had to go buy school shoes so she needs to try those on," she said.

"It's really hard to explain to your kids why you aren't wearing (a mask) when everyone else is, and then also having everyone looking at you giving you dirty looks, almost shaming you in public, even though we're exempt."

Knowing this seemingly small change would have detrimental impacts for her daughter and others like her, she said she felt "enraged" and "helpless" over council's lack of consideration.

"It was the first time ever that I realized that my daughter doesn't have equal human rights," she said. "The deaf population is just basically being ignored."

According to Statistics Canada's 2016 census, close to 6,000 people in St. Albert use sign language to communicate in private households.

Mikayla Maione, Clara's respite nurse, has worked with Louise's daughter since she was one year old. Inspired by the young girl, Maione is taking sign language classes to eventually become an interpreter, she said.

"She's the light of my life," Maione said. "Ever since I worked with her when she was little, I've seen so many progressions. She is thriving."

But the fact council's possible decision could take away Clara's ability to communicate with others in one meeting "destroyed" her, she said.

"It will have more than a significant impact. It will literally change people's day-to-day lives in the worst possible way."

Regardless of council's vote, Maione said she will still wear a plastic face shield to ensure Clara can get the help she needs.

"That's why I will continue to wear my clear face shield, because I'm not going to close off people in my life that I've created relationships with in the deaf community. So yeah, we'll take the ticket."

Along with masks, Quiltessentials, a quilting and sewing business in St. Albert, has clear face shields available for employees so they can communicate with customers who are deaf or hard of hearing.

Store owner Ingrid Machtemes said they learned early in the pandemic that hearing impaired customers had a difficult time understanding staff with a mask on.

"So many of our customers are hearing impaired ... If we were wearing a mask, and they couldn't see our lips, they couldn't understand us," she said.

She said she did not know council was voting to exclude face shields in the city's bylaw. With all the precautions her store is taking, she questioned whether banning face shields would do more harm than good.

"We're doing social distancing, we're sanitizing, we're wearing masks, we're not letting people touch anything in the store ... is (banning face shields) really going to make a big difference?" she asked. "Because it will make a difference for people who need to see your face and see what you're saying."