Moving right before Christmas isn't everyone's cup of tea, but it's a dream come true for a pair of single mothers. Amber Sleen and Jennifer Pass received keys to their respective Habitat for Humanity homes on Saturday.
0
Dec 22, 2009 11:00 PM By: St. Albert Today Staff 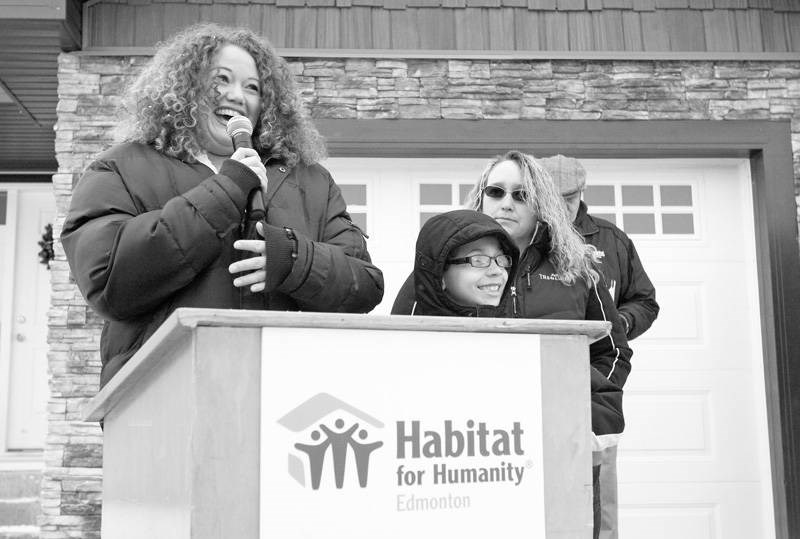 Moving right before Christmas isn't everyone's cup of tea, but it's a dream come true for a pair of single mothers.

Amber Sleen and Jennifer Pass received keys to their respective Habitat for Humanity homes on Saturday. The early Christmas presents produced several tears, amid cheers of "Welcome home!" from friends and family, volunteers and dignitaries.

"It's a blessing to be moving into this home at Christmas. What better way to christen my home?" said Pass, with her arms draped around her son Noah.

Turning the key to her North Ridge duplex led to some mixed emotions for Sleen. The 32-year resident of St. Albert personally put about 60 hours of sweat equity into her home, at times working along side her father, Armond, a drywaller who passed away just before the project was completed.

"He was a great help for me," Sleen said while choking back tears.

"I know he's watching from above," she said.

The Norelle Terrace duplex units were built by Habitat for Humanity in partnership with the City of St. Albert, which provided nearly $500,000 in provincial affordable housing grants for the project. Two other duplex units next door were raised in a blitz build this past summer.

For the four St. Albert families the gift of home ownership represents a hand up, not a hand out, said Alfred Nikolai, president and CEO of Habitat for Humanity Edmonton, but it also means so much more.

"The number of volunteers that came together really shows what St. Albert is all about," Nikolai said.

Her new three-bedroom duplex represents a dream come true for Pass, who has never had the financial means to move out of her parents' home.

While she did learn hands-on skills like installing floor joists, subfloors and windows, Pass, a pharmacy technician, learned much more while working on several Habitat builds in the region.

The resident of the Liberton Terrace housing co-operative also appreciates what her move means for other St. Albert families. When she and Jayden leave Liberton, it will free up a home for another low-income family.

"I consider it a win-win," Sleen said.

The Norelle Terrace duplexes represent the first partnership between the city and Habitat, but that could change in the new year. The city gave Habitat $840,000 for a development on Arlington Drive, provided the project is approved when it goes to council sometime in early 2010.

Habitat wants to build 63 condo units on the vacant school site in Akinsdale, in partnership with Apollo Developments, a private developer.

Mayor Nolan Crouse said council has yet to weigh in on the Arlington Drive proposal but acknowledged the Norelle Terrace duplexes have shown the community what Habitat is all about.

Crouse said he was pleased to meet the families and hopes the experience will help others overcome stigma surrounding affordable housing and Habitat for Humanity.