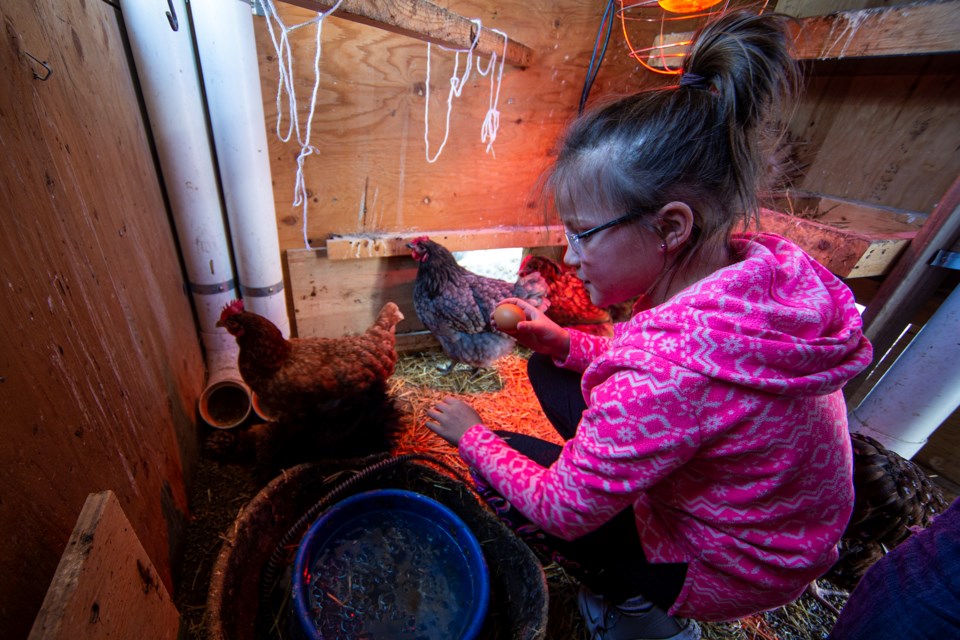 Grade 4 student Kailyn Bradley tends to some of the chickens at Morinville Public, which include different breeds like Silkie, Buff Plymouth Rock and Gold Orpington, to name a few. CHRIS COLBOURNE/St. Albert Gazette

Morinville Public students will show off their chicken skills this weekend as they enter their school’s birds in a regional poultry show.

About 13 students and chickens from Morinville Public School will be in Wetaskiwin this Feb. 15 and 16 to compete in the North Central Alberta Poultry Association’s 19th annual poultry, pigeon and waterfowl show.

Morinville Public started a learning farm in April 2019 that includes an in-school chicken coop. Students and teachers care for the birds, which are used to help teach art, math and other subjects, and sell the eggs at the front desk.

Teacher Monique Webb, one of the farm’s organizers, said she learned of poultry shows while searching online for new ways for students to show off their skills. After doing a test show down in Olds with one student, she decided to take a bigger group to a local show.

This weekend’s event will feature about 290 poultry (including ducks, chickens, and turkeys), 500 pigeons, and 300 rabbits from across the region competing for ribbons and gift certificates, Sebastianelli said.

Sebastianelli said the Morinville Public crew would compete in the junior showmanship contest, which judges the skill of the presenter rather than the looks of the bird. Some 24 people had signed up for the contest as of Feb. 10, some of whom would likely have years of show experience under their belts. Competitors will be tested on bird anatomy, history and handling, the latter of which involves spreading the bird’s wings and claws and having it walk along a table.

Webb said students have been training with and learning about their birds every Wednesday for weeks to prepare for this weekend, and would wash and blow-dry the birds Thursday to pretty them up. The show will give students a chance to show their leadership and public speaking skills.

“The biggest thing they need to do is they need to be able to handle their birds,” Webb said, which isn’t always easy, since some weigh up to 15 pounds.

Regardless of how it turns out, Webb said the school hopes to send its students and chickens to another poultry show next year.

“I think it will be exciting.”

The show runs from 10 a.m. to 5 p.m. Saturday and 10 a.m. to 3 p.m. Sunday at the Wetaskiwin Civic Centre’s drill hall. Tickets are $4. Visit www.ncapoultrya.com for details.

Albertans will have to find new ways to farm as global heating makes a mess of our weather, says a renowned agricultural researcher.

About 300 people were expected to hear Prof. Navin Ramankutty of the University of B.C. give the 18th annual Bentley Lecture in Sustainable Agriculture at the University of Alberta Feb. 11 after this paper went to press.

Ramankutty is the Canada Research Chair in global environmental change and food security and a contributor to the Intergovernmental Panel on Climate Change’s fourth assessment report.

Global heating could let Alberta farmers grow more corn and winter wheat, neither of which are ideal in today’s climate, said Robert Grant, a professor of renewable resources at the U of A and co-organizer of the Bentley talk. But it could also mean wilder weather, necessitating more crop and water storage facilities, and major yield losses across much of the U.S. and Mediterranean.

Agriculture is a big driver of global heating, responsible for about a quarter of all greenhouse gas emissions, Ramankutty said.

“On the flipside, this means agriculture can also be a solution.”

Ramankutty is heading up a study backed by Alberta Innovates that uses machine learning to determine how global heating will affect crops on the Prairies and the best ways to adapt to it. That could mean breeding drought-resistant crops, changing sowing and harvest dates to match changes in weather, water conservation, and no-till agriculture, the latter of which could boost yields and trap more carbon in the soil.

Ramankutty’s talk will be posted to YouTube later this year.