A little more than two years after first tacking up signs to show the number of patients that miss their medical appointments, several medical clinics in St. Albert are seeing a significant decline in the number of no-show patients.
Aug 28, 2013 12:00 AM By: St. Albert Gazette 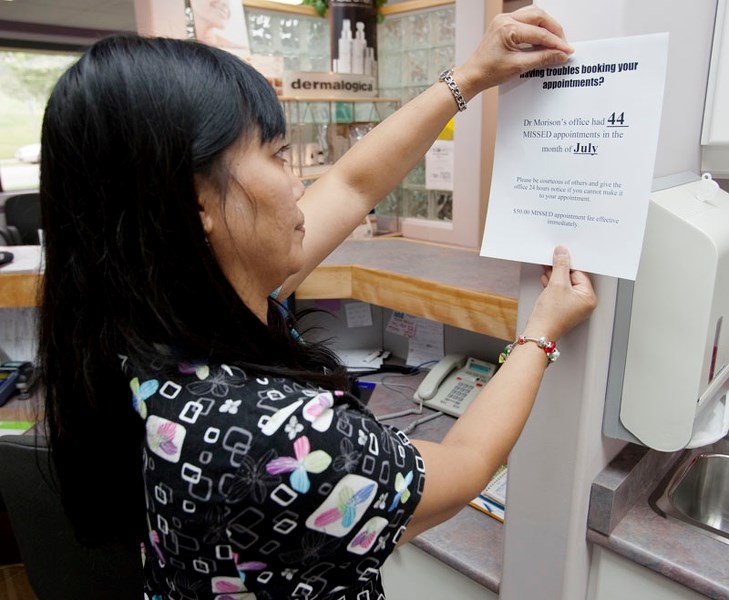 A little more than two years after first tacking up signs to show the number of patients that miss their medical appointments, several medical clinics in St. Albert are seeing a significant decline in the number of no-show patients.

“I would be lying if I said it wasn’t a problem – because it’s always a problem – but certainly since we have implemented our poster board with public notification it seems to have improved,” said Dr. Allan McDonald, a physician at the Associate Medical Clinic in downtown St. Albert.

When the Gazette visited the clinic last February, the first month a no-show sign was used, the number of missed appointments reached 93. In July of this year, the total was 26.

Although McDonald noted the decline could be attributed to seasonal variation of patient numbers, he explained other policies the clinic has put in place such as automated patient appointment reminders and fee penalties, have significantly reduced the number of missed appointments.

“We don’t charge all the time, but certainly for people who frequently miss two or three appointments … we send a letter to remind them that is not appropriate,” he said.

Depending on the type of appointment they book – regular medical or physical – patients are billed according to the fee physicians would bill the province for seeing the patient.

The Liberton Medical Clinic has a similar policy. They charge patients a fee of $50 for a missed appointment.

Dr. Nicholas Morison said the number of no-show patients has dropped from nearly 200 per month down to 44 at the Liberton clinic over the past two years. He said his main concern is less about recouping the financial costs of running a clinic through penalty fees, but more about patient education.

“My main concern is that it is depriving other patients of timely care because when you have 200 missed appointments that means 200 people we could not treat.”

“I think the mental attitude tends to be that health care is free so if I miss an appointment it doesn’t matter. But it does.”

Morison said he has billed patients for late appointments but there are only a small minority of patients that miss their bookings on a recurring basis.

“It does weed out the patients that are most tardy in simply not turning up,” he said, adding the clinic will not see patients that have racked up a tab until they pay up first.

“Having said that, if they have a medical emergency we won’t deny them care. We don’t have a billing process and I can’t afford to send out letters and postage … chasing people for not paying their minor bills.”

According to the standards of practice by the College of Physicians and Surgeons of Alberta, “a physician must not discharge a patient because a patient fails to keep appointments or pay outstanding fees unless advance notice has been given to the patient.”

The Alberta Medical Association (AMA) however leaves penalty fees up to the choice of the physician.

“Charging for appointments may be more of a common policy in high-volume practices or in very specialized practices,” explained Shannon Rupnarain, AMA director of public affairs. “In the latter case sometimes a missed appointment can mean that facility space, equipment and staff arranged for tests or procedures goes wasted if the patient doesn’t show up.”

“These fees are not regulated and there is no set amount that physicians will charge. As with all uninsured services (not covered by the Alberta Health Care Insurance Plan), the amount will vary from physician to physician or practice to practice.”

McDonald admits that although he has not personally billed a patient for not showing up, he acknowledges that it is an effective deterrent, which most patients are receptive to.

“The example I always use is that if a patient showed up for their appointment to see me and when they got here they were told that I decided not to come in and that I just wasn’t going to show up … there would be hell to pay.”

In an effort to reduce wait times as well as missed appointments, Morison advises patients at his practice to talk to clinic staff before making their appointment. Advise staff of what your needs are and how many things you would like to discuss with the doctor so they can schedule you enough time.

He also recommends patients call before their appointment to see if the doctor is running on schedule.

He explained his own family physician kept him waiting three hours, but because he knows what running a clinic is like, he scheduled his day according to the wait.

“I know what it’s like. When you have a bunch of sick people come in, you have to spend more time with them.”

The St. Albert & Sturgeon Primary Care Network has also been working with community physicians to reduce patient wait times and the rate of no-shows by increasing the number of after-hours clinics since April.