St. Albert Fire Chief Keven Lefebvre is no longer with the city of St. Albert after only six months on the job. Lefebvre’s employment with the city ended on Friday but it's not known why he left the city or under what circumstances.
Aug 28, 2018 11:55 AM By: Jennifer Henderson, Local Journalism Initiative reporter 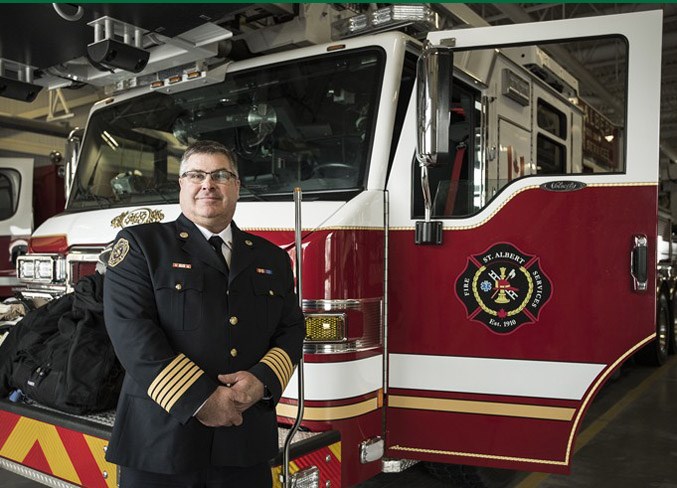 CHIEF GONE – Fire Chief Keven Lefebvre is no longer with the city of St. Albert. Lefebvre started in February 2018 after an almost 10-month search to fill the position. Lefebvre replaced Ray Richards, who served as chief for nine years.

St. Albert Fire Chief Keven Lefebvre is no longer with the city of St. Albert after only six months on the job.

Lefebvre’s employment with the city ended on Friday but it's not known why he left the city or under what circumstances.

“There will be no further comment from the City on this personnel matter,” the city said in an emailed statement on Monday afternoon.

Until further notice Bernd Gretzinger, who is deputy fire chief of logistics, will be the acting fire chief.

Lefebvre started with the city in February 2018 after an almost year-long search to fill the role.

Lefebvre replaced former St. Albert Fire Chief Ray Richards, who spent nine years in the role before his retirement. Richards left the job in early May 2017 and for roughly 10 months the job of fire commander was vacant. During the vacancy three deputy chiefs rotated out on a monthly basis.

It is not known if the three chiefs will rotate during this vacancy or if Gretzinger will be acting chief until a permanent replacement is hired.

Before joining St. Albert Fire Services, Lefebvre spent 30 years – just one month shy of 31 years – with Edmonton Fire Rescue Services. He started as a rookie in the department in March 1987 and climbed through the ranks. Lafebvre spent his last four years there as the deputy chief of training and logistics in Edmonton.

In February, the 53-year-old said he has stuck with fighting fires for his entire career because he loves the challenges of the job, the problem-solving and camaraderie shared by firefighters.

“I love it. It’s the adrenalin and giving back to the community. It makes the hair on the back of your head stand up,” Lefebvre said in February.

During the Fort McMurray wildfire in the spring of 2016, Lefebvre spent eight days in Wood Buffalo helping to fight the fire, and he said he was happy to help assist so many people in their time of need. Lefebvre said it was also exciting to put all of his years of fire training to the test for such a large and challenging fire.

One area of interest for him was in fire codes, and Lefebvre spent 13 years volunteering on the fire technical counsel for Alberta where he helped write fire codes for the province.

The Gazette reached out to Lefebvre for comment but he could not be reached by press time.