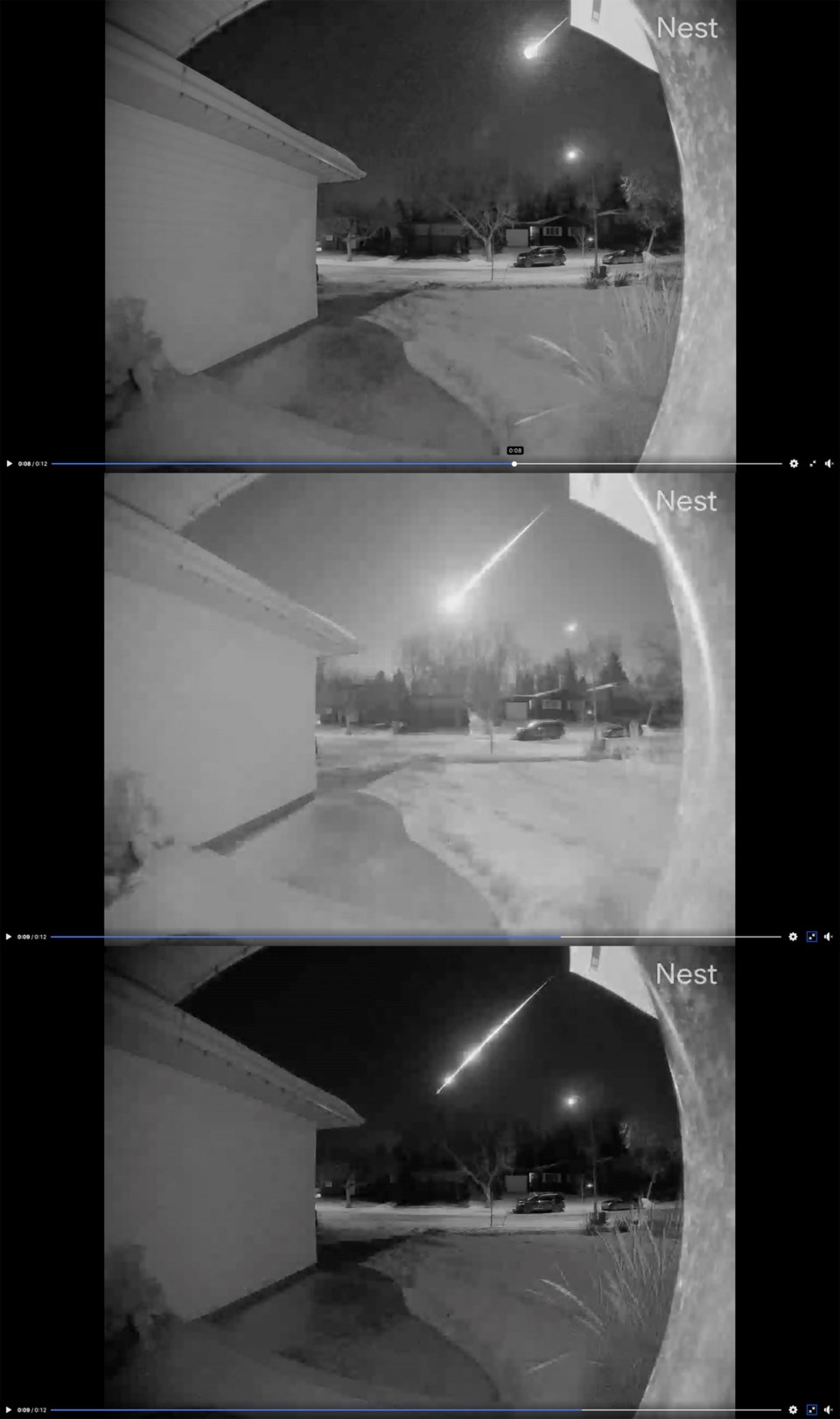 SPACE VISITOR — This series of pictures is from a video posted to Facebook by Grandin resident Kyla Sykes depicting the bright fireball that streaked over St. Albert at 6:23 a.m. Feb. 22, 2021 as recorded by a doorbell camera. The fireball was visible throughout much of Alberta. KYLA SYKES/Photo

St. Albert sky-watchers were thrilled Monday morning by the sight of a bright white fireball blazing across the sky. Now, astronomers want their help to figure out where this fiery space rock may have landed.

People across Alberta saw a fireball streak across the sky at about 6:23 a.m. on Feb. 22.

Videos of the event posted on social media depicted a bright white ball of light that flashed across the early morning navy blue sky of St. Albert, leaving a brilliant trail behind it before it vanished.

Grandin resident and Uber driver Bob Hunter, 63, said he had a clear view of the phenomenon through the sunroof of his Cadillac as he was picking up a passenger in Jensen Lakes.

“I saw the buildings light up around me and as looked up I saw this streaking blue light change to green, change to yellow, and then explode,” he said.

“You could see the colours shift and change on the stucco walls and the garage door of the house I was around. It was that bright.”

Hunter said the fireball appeared to be about 45 degrees above the horizon and travelled about 10 miles east before it exploded like a stick of dynamite. The whole event was over in less than two seconds.

Hunter said he was “a little flabbergasted” by the event and tried to alert his passenger to the sight. (She missed it as she was watching her steps for ice.)

Writing on the Grandin St. Albert Residents Facebook page, Jordan Atkins said he was on his way to his car Monday morning when he saw the fireball, which lit up the fence in front of him. He turned around in time to see a streak of light vanish.

“It startled me, but (it) was pretty damn cool,” he said, adding that he woke up his wife to tell her about it.

"It definitely created a bit of a stir.”

Florian said this fireball was caused by a meteor a few metres wide slamming into Earth’s atmosphere at about 70 kilometres a second (252,000 km/h). Energy from the resulting friction was released as heat, light and sound, producing the fireball.

St. Albert Royal Astronomical Society of Canada member Bruce McCurdy said this meteor was material left over from the early days of the solar system. The flash seen in most videos suggests the meteor exploded in mid-air.

“That piece of debris was probably out there orbiting for millions, probably billions of years before it had its moment of glory this morning.”

Florian said meteors hit Earth’s atmosphere all the time, although they don’t always produce giant fireballs. Fireballs tend to happen most often from February to April.

Florian said the light produced by the fireball could hint at this meteor’s composition, as elements produce different wavelengths of light when heated. Smoke trails seen in some videos of the fireball suggest the meteor burst into fragments that may have landed on Earth, possibly between Radway and Westlock.

“This is stuff left over from the formation of the solar system,” Florian said, so researchers hope to find those fragments to learn more about the solar system’s history.

Florian said anyone who saw or heard the fireball should file a report on the American Meteor Society website. Meteor hunters should watch for char-black rocks that may be magnetic and report their findings to University of Alberta meteor researcher Chris Herd at [email protected].