Fired up about fundraising

A St. Albert firefighter has won Muscular Dystrophy Canada’s Alberta Firefighter of the Year award for all of his work fundraising for the cause. Jay Howells, who has been with St.
0
Aug 28, 2018 5:53 PM By: Jennifer Henderson 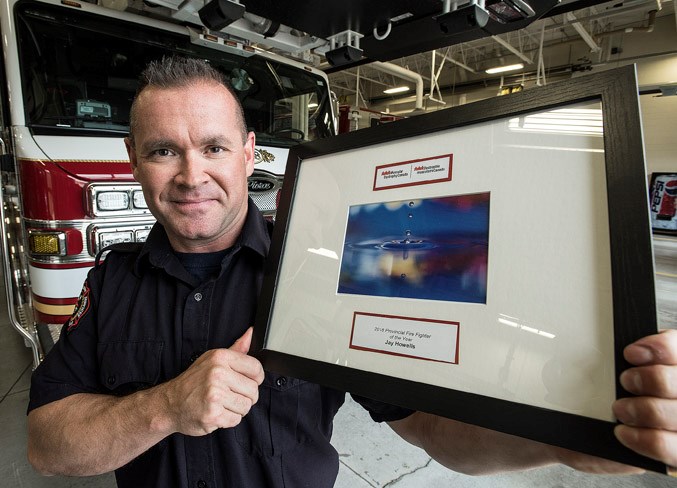 A St. Albert firefighter has won Muscular Dystrophy Canada’s Alberta Firefighter of the Year award for all of his work fundraising for the cause.

Jay Howells, who has been with St. Albert Fire Services for five years, has been working with Muscular Dystrophy Canada since he started in St. Albert, and on Monday he was recognized at the fire hall for his work.

“It feels great, and I’m honoured,” Howells said, but added the award was the result of a big team of firefighters who camp, organize or cover shifts while Howells and the team do the rooftop camp out.

The firefighter is one of four who camp out on the fire station rooftop during the four-day winter fundraising campaign. Howells, along with Derek Ellicott, Kyle Nobles and Lee Monfette spend the winter nights on the roof. Kim Monfette, Kathi Sheedy and Amanda McIntyre work behind the scenes to secure donations, organize the event and keep the campers fed and happy.

“It’s nice that I get the recognition and my name is on that award. It would be great if all those names are on that award,” Howells said.

During the last fundraising year the small-but-mighty department has been successful, managing to pull in around $75,000 through many initiatives.

Howells said they would not be able to raise all of the money without the support of the community.

“The vast majority of it is private citizens. Its not a big corporate event like other cities. It’s only thanks to the citizens of St. Albert and the businesses that get behind us,” Howells said.

At first he started with the campaign as a rookie in the department and hoped to have some fun bonding on the rooftop with his new colleagues, but it soon evolved into a passion for Howells.

“Something happens over the years while we are doing this. Kids with muscular dystrophy come and visit us, and I’ve become friends with their parents,” said Howells, who added over the years it became less about the rooftop campout and more about raising funds.

Along with raising money through local campaigns such as the rooftop campout, Howells is also a firefighter adviser with Muscular Dystrophy Canada and helps brainstorm ways to raise more money and get more departments involved.

Annelies Vanderlaan of Muscular Dystrophy Canada said firefighters are a cornerstone of their fundraising efforts, with fire departments accounting for 33 per cent of all money raised for the organization.

Vanderlaan praised Howells and the rest of the St. Albert department for raising so much money.

Howells' family was in attendance at the ceremony and his wife Nicole said his passion for charity is contagious, and she can see their three young children trying to find ways to give back to the community and local charities they are passionate about.