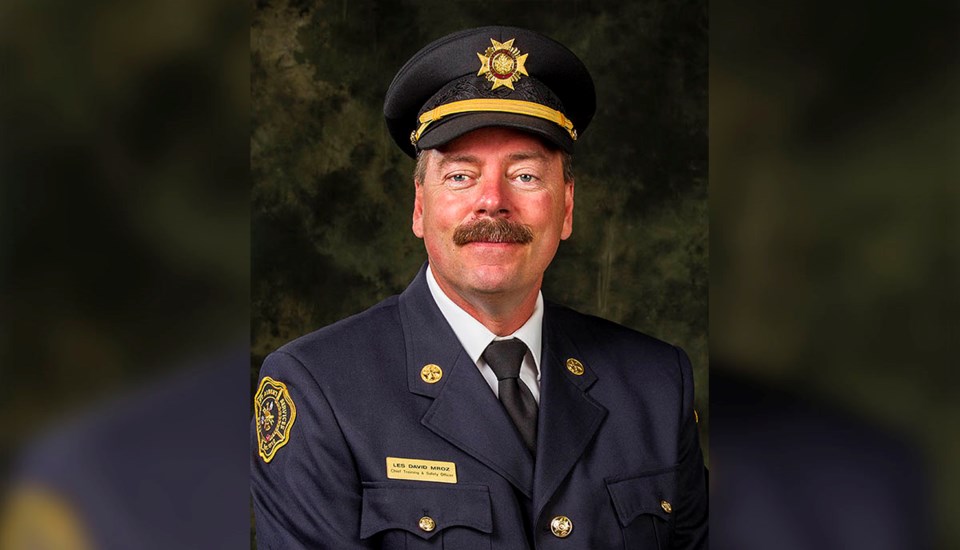 FACE OF FIREFIGHTING — Family and friends will be in St. Albert Thursday to remember Les David Mroz, who died last week at age 58. Mroz was St. Albert's main fire training and inspection officer for more than a decade, and previously served as fire chief in Peace River, Beaumont and Parkland County. MROZ FAMILY/Photo

Most people knew firefighter Les Mroz as the face of the St. Albert fire department – the serious inspector, giving safety warnings as he explained why a building burned to the ground, or the happy volunteer, flipping burgers for McHappy Day.

His son Bryan said he knew Mroz as someone who’d kick back with him on the weekend with iced tea, Pizza Pockets, and Goldeneye on the Nintendo 64. Mroz was also his inspiration to become a firefighter – the two served alongside each other in St. Albert for many years.

“We always saw each other more as brothers than dad and son,” Bryan said.

Les David Mroz died at his Parkland County home on April 15 at age 58.

Bryan said the medical examiner was still working to determine how Mroz died. All they know so far is Mroz had come home, chatted with his wife, Fay, and eaten a sandwich before going out to do some yard-work.

“When they sent the grandchildren out to get him for supper, they found him on the driveway collapsed,” Bryan said.

Mroz had no known history of heart disease and would have passed annual checkups as a firefighter, Bryan said.

St. Albert Fire has been fielding messages of support from across the province since news of Mroz’s death broke, said fellow firefighter Greg Harvey.

“He’s the face of the department,” he said of Mroz, and one of the finest fire inspectors he’s ever known.

“He leaves a big hole in the heart of St. Albert Fire by not being here anymore.”

Mroz grew up in Winnipeg but went to junior and senior high in St. Albert, graduating from Paul Kane, Bryan said. He initially drove a bus for Edmonton Transit, which is where he met his first wife, Marilyn.

Mroz was a pilot and would take his kids on flights in a Cessna out of Villeneuve Airport, Bryan said. He was also an avid outdoorsman and big into boating and camping.

“Every weekend was a boat trip out to Wabamun,” he said, and the two had just recently bought a cabin on Shuswap Lake.

While he originally tried policing, Bryan said Mroz soon found his calling as a volunteer and later full-time firefighter.

“He always wanted to help people.”

Prior to his 12-year stint with St. Albert Fire Services, Mroz served as Beaumont’s fire chief for about half a year, Peace River’s chief for three years, and district fire chief for Parkland County for almost nine.

Mroz had the skills to serve as St. Albert Fire’s training, fire prevention/investigation, and health and safety officer, Gretzinger said – a unique combination that will be hard to replace.

Mroz was professional and meticulous when investigating the cause of a fire, but could bring joy and levity to even the grimmest of cases, Harvey said.

“He was the most happy-go-lucky guy,” Harvey said, and could always brighten up the workplace.

He was also the go-to volunteer at the station, and would organize all the open houses, McHappy Days and Fire Chief for a Day events, Harvey said. When someone had to haul out the charger to give an old truck a boost every day at 8 a.m. in the winter, Mroz would be the guy out there doing it with a smile on his face.

Mroz is survived by his parents, Raymond and Valerie, sister Wendy, children Bryan and Megan, wife Fay and about six grandkids. He is predeceased by his daughter Sarah.

Mroz’s service will be at the St. Albert Alliance Church this April 25 at 2 p.m. Donations in Mroz’s name can be made to STARS Air Ambulance.