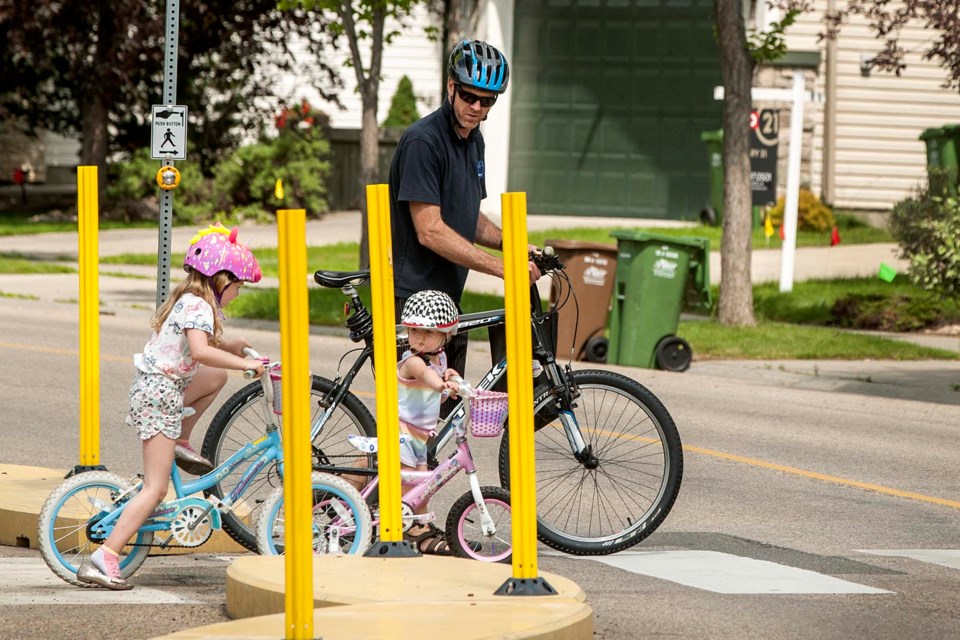 Efforts to calm traffic in high-risk areas of Erin Ridge continued with the installation of three raised crosswalks last weekend.

The construction was part of finishing last year’s $575,000 phase in the Erin Ridge traffic calming plan, which is meant to address vehicle speed, intersection safety and crosswalk issues.

Fourteen locations were identified for traffic calming measures in 2018, the majority of which have been completed. However, delays caused some of the work to be carried forward this year.

After the carried-forward work is complete, the next phase of traffic calming in Erin Ridge will continue into the summer at a budgeted amount of $500,000, which Cleland said has not gone to tender yet.

Kari McKnight, who sat on the Erin Ridge traffic neighbourhood calming consultation task force, said despite the new measures she has still had a couple of “near misses” crossing the street with her children.

“There’s always a concern for safety for the kids, we’ve had couple of near misses directly on that raised crosswalk, so even though the traffic calming measure is there there’s still always going to be impact to pedestrians,” she said.

Anecdotally, however, McKnight said the measures have had an impact and traffic has slowed down a bit.

“I feel like any measure that’s going to help lessen the number of near misses is beneficial,” she said.

Cleland said traffic analysis is key in determining success of the traffic calming, and some of the measures were installed temporarily for a period of analysis before the city went ahead with actually pouring any cement.

“What the intention will be is to monitor those continuously and see if we need to add any more or if we need to upgrade some, or if they’re temporary maybe we can take them out altogether if they’re not needed,” Cleland said.

As far as what the data says about the program’s success to date, Cleland said average speed has gone down, although that was to be expected after city council approved a uniform reduction in speed from 50 km/h to 40 km/h across Erin Ridge and Erin Ridge North in January.