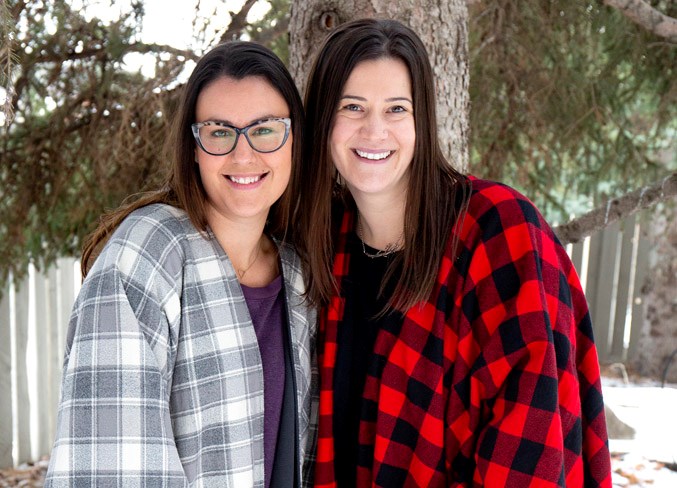 Two locals are stitching together a new business venture.

Partners Krista King and Meagan Ryan are about to launch a high-end flannel blanket and jacket business called LumberJill Apparel.

“I think one of the coolest things about this whole adventure so far is the amount of personal learning about the industry,” Ryan explained.

Currently, the duo is sewing the pieces together in King’s basement. She said the idea came after noticing there wasn’t enough flannel-inspired outdoor wear for women.

Whenever the two, who are related, would take their families camping, they’d always notice how comfortable their husbands were in their flannel jackets.

Ryan and King had been searching for over a year for a female version of the jackets, which appears to have a hoodie sewn into the inside. Unsuccessful in their attempts, the two instead would wear their husbands' jackets.

After a night of talking, King decided to start the business.

King, who works as an occupational therapist with children who have severe disabilities, said it’s been an exciting and frightening experience starting her own business.

Growing up in a home where both her parents worked for the same company for more than 30 years, King said she had to challenge her desire for security in order to pursue her new passion.

“There’s something about the fear that excites me,” she said.

Both Ryan and King say they couldn’t have started the new business without the support of their husbands. But, they also say it’s been great to band together as women and lead a new business.

According to the Global Entrepreneurship Monitor, in 2017 the amount of female entrepreneurs in North America rose by 12.8 per cent.

Women have also been dominating the workforce in Alberta. A report released by ATB Financial in March compared positions across seven sectors in Alberta last year, which found that females had held the most positions.

The report found 1,039,400 women held positions, compared to 1,247,600 jobs held by men. The most common sector run by women was in the healthcare and social assistance sector, with 82 per cent of positions being filled by females.

LumberJill Apparel will be launching online on Nov. 22. To learn more about their product visit: https://www.facebook.com/LumberJillApparel/.