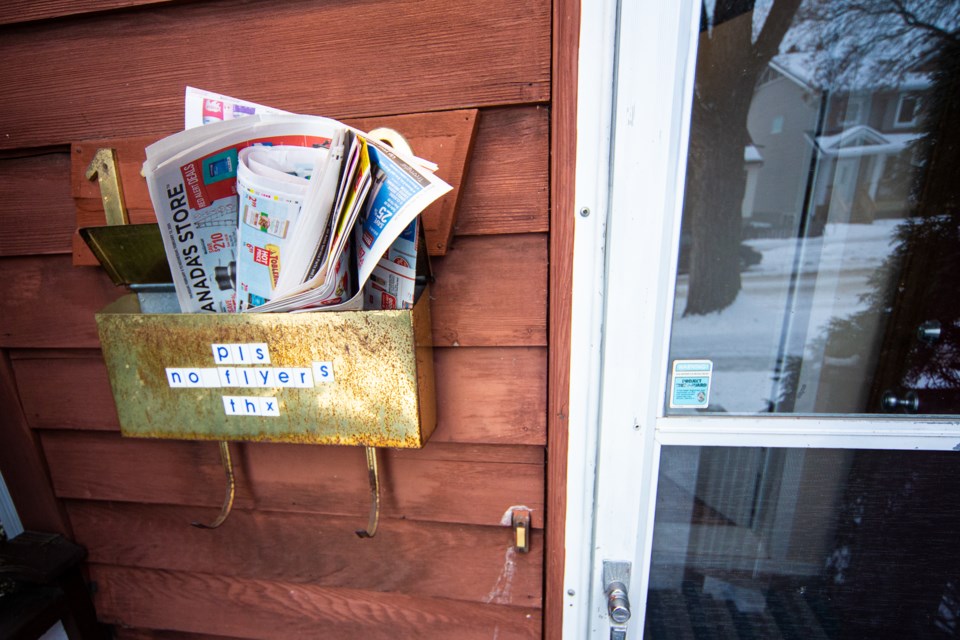 Some home owners opt to not receive flyers in their mailboxes. CHRIS COLBOURNE/St. Albert Gazette

If realized, a proposed flyer opt-out bylaw could have a dramatic impact on local businesses, according to the St. Albert and District Chamber of Commerce.

“Many local businesses utilize flyers to advertise their products and services, especially when they’re using coupons, as part of their promotion. It’s going to have a huge effect,” said Jennifer McCurdy, president and CEO of the chamber.

On Feb. 3, council narrowly voted 4-3 in favour of administration drafting a bylaw by September requiring companies delivering flyers to respect “no flyer” signs, after Coun. Natalie Joly brought forward the motion. While the bylaw has yet to be written and presented to council, fines of up to $10,000 could be applied, and it would be enforced on a complaints basis.

In her opening arguments, Joly said residents are passionate about the environment, and this is one step St. Albert can take to reduce its environmental footprint.

Flyers are an economical and efficient form of advertising for many businesses in St. Albert, McCurdy said. A flyer opt-out bylaw from council seemed to come “out of left field.”

“I was surprised. You have to wonder where it’s coming from, and have they really delved into it in great detail to look at all the ramifications of it?” McCurdy said.

“How are they going to monitor it, and what is the cost going to be to the bylaw officers? How do you know who put the flyer in that particular mailbox at that particular time? It’s not as simple as just opting out.”

Political literature would be excluded from such a bylaw, administration said, because numerous Supreme Court cases have demonstrated “political speech is the most important speech to protect in our free society.”

Since Canada Post is under federal jurisdiction, the bylaw would not apply to flyers delivered by the national postal service.

“So what the city is actually doing with this bylaw is essentially moving business from the private sector to a Crown corporation,” McCurdy said.

If the bylaw passes, McCurdy said she worried Canada Post would then become a monopoly for flyer distribution in St. Albert.

“If they’re the only option for the people that utilize the flyers, then absolutely, they can set any price that they want,” she said.

An industry in crisis

Perry Sampson with Flyers in the Park, a distributor for Edmonton Flyer Force, said it's rare for a mistake to be made with the company's existing opt-out policy, and their customers seem confident with the process.

Sampson later told the Gazette he wasn't speaking as an official spokesperson of Flyer Force.

When they receive a call from a residence asking to stop delivery, Sampson said they let the carriers on the route know exactly what address to bypass, and the problem is resolved.

"Sometimes it take a week or two to go through the system but we let the carrier know immediately," Sampson said. "If it still happens, we go after the carrier for it, but we absolutely respect the no flyer sign."

To have this process enforced with a potential fine would make things more complicated for an already struggling industry, he said.

“No one is making a large amount of money in this business. I would almost say it’s in crisis mode because ... subscriptions are constantly going down,” he said, adding Canada Post is the distributor's biggest competitor.

Flyers in the Park delivers to around 17,000 homes in St. Albert alone, with between 15 to 30 businesses advertising per week.

For most of their carriers, flyer delivery is their first job, Sampson said. Some are young, around 12 to 15 years old, while others have special needs. Customers also tend to change their minds frequently about flyer delivery, removing or replacing a ‘no flyer sticker’ in a matter of weeks.

Mistakes can happen, but if passed, the bylaw would make it a costly one.

“Now we have to start paying fines if a kid goes out and makes a mistake? It would put a strain on us,” he said.

“Then what is to stop somebody from going and putting flyers in someone else’s mailbox just to get somebody else in trouble? We’re dealing with kids, and we’ve had it happen before. It could become a real can of worms.”

Betts Robinson, the owner of M&M Food Shop's Giroux location, said the bylaw would also have a negative impact on M&M's ability to advertise to residents in St. Albert. She estimates the business sends out close to 20,000 flyers each week through the St. Albert Gazette.

“I wish we weren’t this dependent on flyers, I would love to get rid of the flyers personally. But our business is quite dependent, people use our flyers all the time,” Robinson said.

While expensive to print, Robinson said they distribute flyers because they see a direct return on their business. If the bylaw does pass, she said she’s going to have to find another way to get their promotions out there.

“You can get our flyers online, but there are still some people that want the paper in their hands. There’s the occasional one or two weeks a year that we can opt-out of sending a flyer ... if we don’t send it out, we do notice a drop in traffic.”

While legislative services director David Leflar said there would be an exception for newspapers, he said he had not considered the mechanics of excluding flyers inserted in the Gazette.

Revenue from flyers and advertisements in the newspaper pays for the carrier and reporter salaries, said Brian Bachynski, Gazette publisher. A potential flyer opt-out bylaw would significantly impact operations at the newspaper.

“It’s disheartening that council would contemplate a bylaw that would open us up to fines and potentially compromise our ability to offer the Gazette to our readers,” Bachynski said.

“The Gazette already gives residents the ability to opt out. Such a bylaw would also make the playing field uneven as Canada Post, a Crown corporation, would be exempt from a municipal bylaw and would not be subject to fines.”

— with files from Hannah Lawson