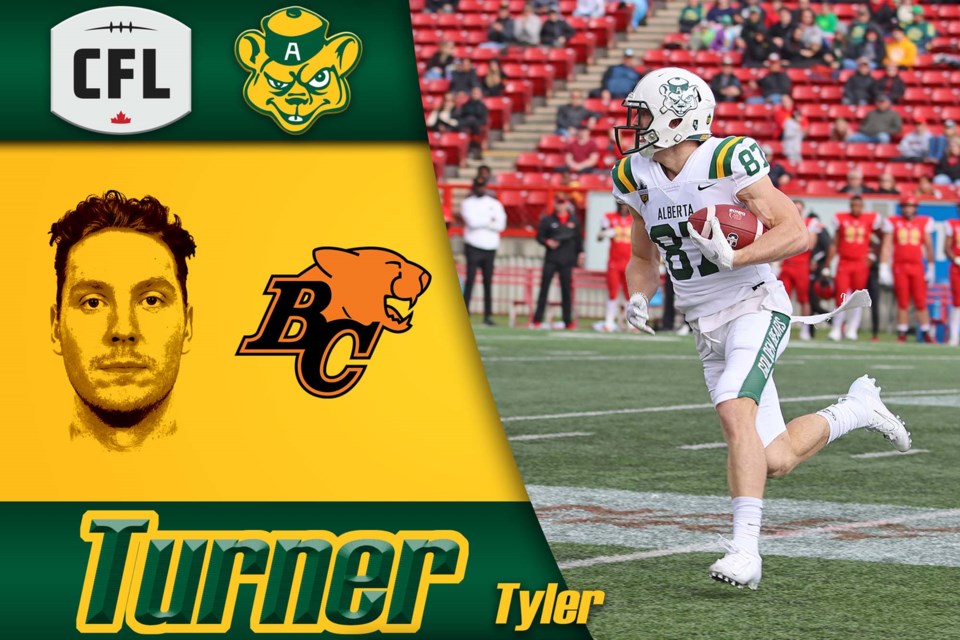 RISING STAR – The B.C. Lions announced May 13 that they had signed St. Albert's Tyler Turner, shown here in his U of A Golden Bears garb, to their roster. Turner will now get to compete for a spot on the CFL team at training camp. DYLAN NIEDERMAIER/Photo

A St. Albert football player will hopefully get his shot at the big leagues this year now that he’s signed a deal with the Canadian Football League.

The B.C. Lions Football Club announced May 13 that they had signed St. Albert’s Tyler Turner to their roster. The move means that the Paul Kane graduate will get to compete for a spot on the team later this year.

“It’s been a dream of mine forever,” Turner said of joining the CFL, and he was super grateful for the opportunity.

Turner played eight games as a receiver with the Golden Bears last year, during which he caught 25 passes for 429 yards and two touchdowns. Prior to that, he played for the Paul Kane Blues and University of B.C.’s Thunderbirds, serving as a reserve player during the latter team’s 2015 win of the Vanier Cup.

Turner said he’s been playing football in St. Albert since he was about eight and credits his coaches for keeping him motivated to stick with the sport. His time as a quarterback taught him a lot about plays and strategies – knowledge he now uses as a receiver to be in the right spot to catch a pass. He wasn’t sure if the psychology degree he is working on would help his game, but speculated it could help him analyse team dynamics.

Turner is a person of high character who can be counted on in all aspects of life, said Golden Bears football coach Chris Morris.

“He’s one of the best receivers in the country,” he said, and a hard worker who pays meticulous attention to details.

While he wished Turner had signed with the Edmonton Eskimos, Morris said Turner would make an excellent receiver or special teams (kicking play) member with the Lions.

It’s an open question as to whether or not the Lions or any CFL team will even play this year – like virtually all pro sports, the start of the 2020 football season has been delayed due to the coronavirus pandemic.

CFL Commissioner Randy Ambrosie said May 20 that the CFL might start a shortened season this year as early as September, but may also have to cancel the season entirely. It’s also unclear if the league would play with or without fans in the stands.

Turner said training camps were supposed to start this week, but they’ve been pushed back to at least September due to the pandemic.

Turner said he is working on his passing and running game in between gigs at his summer job as a landscaper in preparation for the Lions training camp, which is typically held in Kamloops. At the camp, he’ll be one of about 100 athletes competing for about 56 spots on the team.

“It’s great to get the opportunity, and I’m super appreciative of it. I’m excited to get out there and show them what I’ve got.”

Tyler encouraged other student athletes sidelined by the pandemic to do what they could to keep their skills up.

“It’s a long journey that can have some speed-bumps, and this is one of them, but if you can persevere and stick with it, it’ll really pay off.”