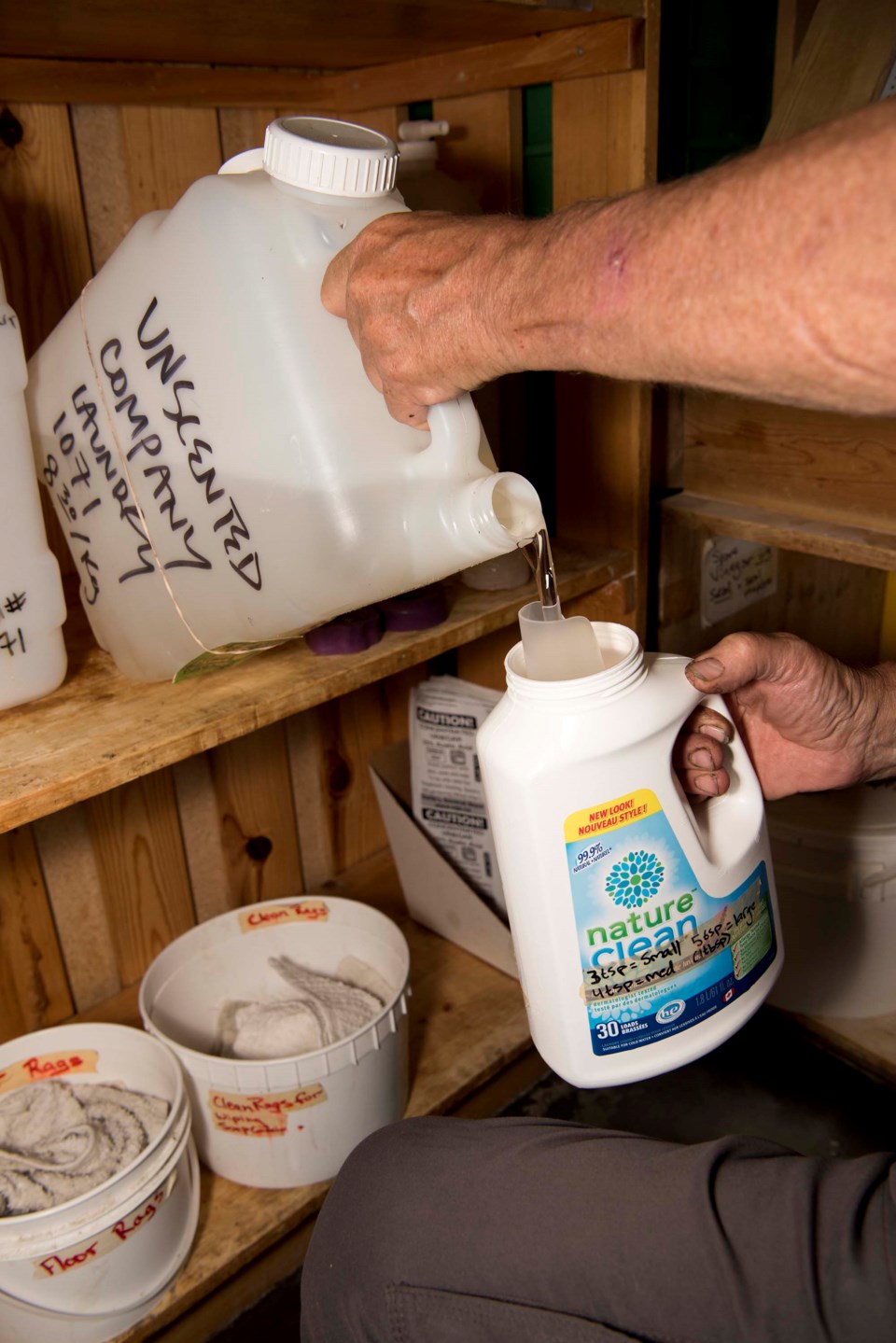 LESS WASTE — Michael Kalmanovitch demonstrates how customers can buy bulk detergent in reused containers at Earth's General Store. He will be part of a free talk later this month on waste reduction. KEVIN MA/St. Albert Gazette

Clarification
Michael Kalmanovitch originally said that his store's reusable container program kept about 50,000 bags and 60,000 containers out of the landfill in a typical month. On Jan. 12, 2021, he clarified that he had misspoken – those were the program's waste-diversion numbers for a typical year, not one month. This story has been updated accordingly.

City residents still digging out from their mountain of Christmas trash might want to check out two free talks this month on how to reduce – and rethink – waste.

Zero Waste Edmonton will host a free online forum Jan. 22 on food and plastic waste. The group is a student-led non-profit that aims to alleviate hunger and greenhouse gas emissions by redirecting excess food from restaurants and bakeries to those in need.

“There’s so much waste being generated,” said group president Riya Prajapati, noting her group alone saved about 1,000 pounds of food in Edmonton in just the last four months.

Prajapati said this talk aims to give people tips on how to reduce waste and highlight Edmonton-area groups that are active in waste reduction.

While this program was suspended for much of last year due to the pandemic, Kalmanovitch said the store restarted it about a month ago with the approval of Alberta Health Services. He estimated the program helped his customers keep about 50,000 bags and 60,000 containers out of the landfill in a typical year.

Kalmanovitch said one way to reduce waste while shopping is to stick to the outer edge of a store, as stores tend to stock unpackaged items such as fruits and vegetables on their outer edges.

Another is to “rethink” and “refuse” before you reduce, reuse and recycle, Kalmanovitch said. To rethink is to re-evaluate what you’re buying to see if you actually need it (“Do I really need that 50 kg bag of Costco Cheetos?”). To refuse is to tell vendors in advance that you don’t want extra bags, napkins or other items so they don’t give them to you automatically.

Also at the forum will be University of Alberta marketing researcher Saurabh Rawal, who will address the psychology of wastefulness.

We think of waste in terms of trash and recycling rates, but waste starts way before the end of a product’s life, Rawal said. If you have a hoard of items in your home sitting around unused, that’s also waste, as those items aren’t available for others.

“We need to think about wastefulness before we start discarding stuff,” he said.

Rawal said he is researching why people hoard possessions and how to encourage them to donate unused items to charity. One solution might be to treat your things like people: if you respect your possessions, you’re more likely to make sure they get used to their full potential.

The talk starts at 5 p.m. Visit bit.ly/2LEhoMp to register.

If you specifically have a problem with wasted skirts and shirts, there's a second free talk this month on how to prevent clothing waste.

Marilyn McNeal-Morin, the director of George Brown College’s Fashion Exchange in Toronto, is giving a free online lecture on sustainable fashion later this month at the University of Alberta.

A big part of this is due to fast fashion and consumer habits, McNeal-Morin said.

“Think about the size of the closet in the average house,” she said.

The fashion industry encourages people to buy and throw out lots of clothing, with the average outfit going through about four uses before it gets tossed in the bin, McNeal-Morin said. Clothing has also proved difficult to recycle, as each article has a unique mix of fabrics to sort and separate. Combine these problems with wasteful industry practices (which sees about 20 per cent of every fabric roll left on the cutting-room floor), and you end up with some 85 per cent of all post-consumer clothing in North America landing in the dump.

Clothing waste could be diverted to charities to get clothes to people in need, McNeal-Morin said. Instead, we spend tax dollars hauling it to landfill, and huge amounts of water and chemicals to make new clothes.

"It should be considered a resource,” she said of clothing waste.

McNeal-Morin said one of our best options to reduce clothing waste (besides buying less clothing) is to resell or donate unwanted items. The textiles industry, meanwhile, ts working on recycling. Her department has partnered with the Joe Fresh clothing company to see if they can dissolve cellulose-based fabrics such as cotton to produce recycled fibers, for example, while other companies have started using shredders to convert waste fabric into new goods, such as home insulation.