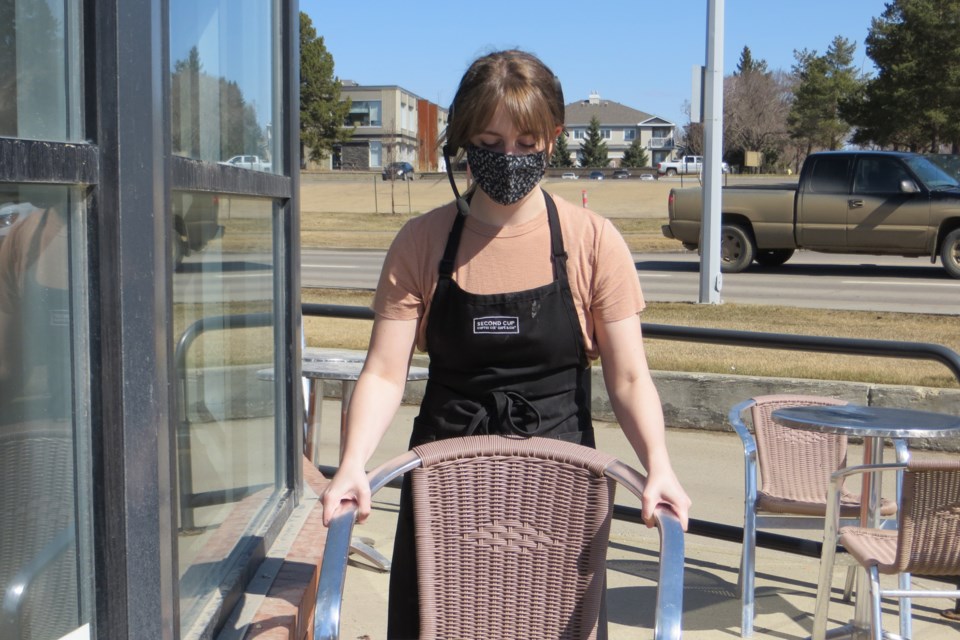 “I’m obviously not overly thrilled. The premier has done this before and it hurts and it takes a long time to get going again,” said Matthew Atkins, owner of Endeavour Brewing in Campbell Park. “I feel they’re picking on restaurants and gyms. I wouldn’t mind seeing information that says restaurants are super-spreaders.”

Atkins rolled out his four-table patio at the beginning of March. As soon as the snow melted, adventurous guests were sitting outdoors enjoying a cool brew.

For the craft beer maker, it is not a question of opening the 16-foot by 16-foot patio. He is resigned to the closures and is taking quick action. His next hurdle is an attempt to increase the patio size to 32 feet by 16.

“We want to expand the patio. We don’t have approval from the city, but we have all the paperwork done. This will double the patio up to eight tables as we go into peak beer season. In May and June, people are around mingling outside with friends before they go away for the summer.”

Atkins was very excited in the first week of February after the province’s Christmas restrictions were lifted and restaurants, bars and cafes were once again permitted to offer in-house dining services.

“People are social in nature. I don’t see how following the rules on indoor dining is an issue. Lots of customers tell me they feel safe. We spray everything down with bleach and people sit two metres apart.”

Egobash Samarakoon, co-owner/chef at Hot Grill, is equally frustrated. Despite support from Remax, the City of St. Albert, City Ford and numerous other small businesses and individuals, the Tudor Glen restaurant was unable to make rent through the months of January and February.

The 50-per-cent drop in business required Samarkoon and his partner Madura Ganganath to dip into savings.

“Going forward will be tough, but I have to say thank you to all the people who helped us with takeout,” said Samarakoon.

Resolved to continue cooking, he too is looking at opening a small patio. But the cost of a carpet, tables, chair and umbrellas could well surpass $1,000. Coupled with a $5,000-per-month rental bill and $1,400 in utilities, it’s a cost the restaurant can barely afford to cover.

Tina Dupuis, co-owner of Second Cup on Bellerose Dr., is also looking at her five-table patio to keep business rolling. Fortunately, Second Cup also has a drive-thru window where patrons can always pick up their morning muffin and cup of joe.

“My initial reaction to Kenney’s announcement was ‘Here we go again. I feel like a yo-yo, open-close, open-close. When people see things visually, they buy more. I’ll have to start adjusting how much stuff I bring in,” said Dupuis.

But the closures mean more than simply having to rewrite the shopping list. For Dupuis, the social aspect is an integral part of the business.

“I feel badly for our patrons. I have a lot of students, but also the older generation. For many, it’s part their daily routine. Many have become friends. They chit-chat and share stories and we (staff) laugh with them. This gives them a place to socialize,” said Dupuis.

“It’s sad, but we want to do our part and get through it. It’s unfortunate for our guests, but what do you do? It’s such a delicate thing. We follow the protocols for our guests and they in turn have supported us. We have been accommodating them and they have accommodated us,” said Feliciani.

“People love the tables in the summer months. The outdoor tables are so quaint. They have a nice hometown feel. It’s very much like back home (Italy). We strive to be very niche.”

Despite the financial and social hit to her business and her patrons, Dupuis believes Kenney is doing the best he can in a tough situation.

“I don’t think anyone can figure this situation out. I feel he tries his best. Will he make everybody happy? No. But hopefully there’s a light at the end of the tunnel. He’s in a tough position and is doing the best in the interests of the province,” said Dupuis.