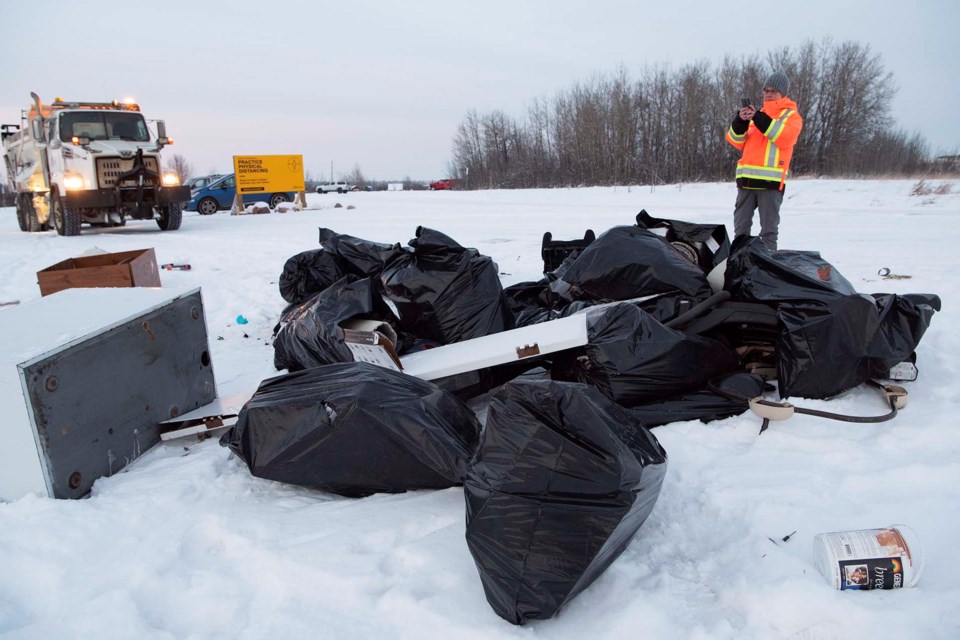 Update
At the request of Alberta Environment, this story was updated on Jan. 31 to include more detailed information about the penalties for illegal dumping.

Visitors to Lois Hole Provincial Park Thursday were greeted by an unwelcome sight: a pile of trash dumped on the park’s doorstep.

City of St. Albert and Alberta Parks officials received reports Jan. 28 that a large pile of construction and demolition waste had been illegally dumped next to the parking lot of Lois Hole Centennial Provincial Park.

Regular park visitor Judy R. said she spotted the trash pile when she drove into the lot at about noon Thursday. The waste was concentrated in a 10-foot by 10-foot area, and contained car seats, garbage bags full of rugs and wooden furniture.

“It obviously hadn’t been there long, as there was no snow on it,” Judy said (it snowed on the night of Jan. 27).

“It looked like someone just backed up their truck.”

Judy, who asked that her last name not be published, said she reported the mess to city and Alberta Parks officials, adding she was disappointed someone had dropped this waste here.

“It’s such a beautiful area.”

“It’s a shame people treat our city like this,” she said.

The Gazette’s examination of the trash pile found it contained caulking tubes, electrical cords, a child’s black car seat, a can of acrylic paint, two large wooden cabinets, multiple black trash bags full of carpet and wooden molding, and a broken white sign with “NORTHAL," “APPROVED DAYH,” “ACCREDITED,” and “780-448” written in blue text on it.

The sign appeared to be connected to NorthAlta Family Day Care Service, which has run day homes in Edmonton for 36 years and has a 780-448 number.

NorthAlta agency co-ordinator Arlene McMillan told the Gazette that she was “absolutely baffled” to see the sign at this location.

“NorthAlta has not used this style of sign in over four years, so we are confused as to how it was found in that area,” McMillan said.

McMillan said NorthAlta day home operators get signs to advertise, but typically put them in their windows to ensure they don’t get lost. Operators have to return the signs when they close their homes or pay a replacement fee, and it is very rare for the agency not to get a sign back.

McMillan said she was not aware of any recent renovations at NorthAlta homes, adding she would know about such renos as they would be disruptive to a home’s operation.

“We are environmentally conscious and it is disturbing that this garbage was dumped in Lois Hole Park,” she said.

“It is even more bothersome that our company sign was in the garbage.”

“In addition to being unsightly, dumping garbage in natural spaces can pollute the land, water and soil,” Part said, which can harm wildlife and public health.

Part said illegal dumping in a provincial park carries a $300 fine, which, in serious cases, can rise to up to $100,000 plus a year in jail for an individual or $500,000 plus cleanup costs for a corporation. Waste should be disposed of at waste management centres, recycling depots and eco-stations.

While the Big Lake region is no stranger to garbage – Riel Recreation Park sits atop an old landfill – Dave Burkhart of the Big Lake Environment Support Society said it has been many years since anyone had anyone has dumped waste in the provincial park. He called this particular incident “deplorable and irresponsible.”

“With the increased use of Lois Hole Provincial Park resulting from the pandemic, I had hoped people would have developed more respect for the natural environment than to use it as a garbage dumping ground,” he said.

Anyone with information about this or other incidents of illegal dumping on provincial Crown land should call the Conservation Officer Enforcement Line at 780-644-3880.