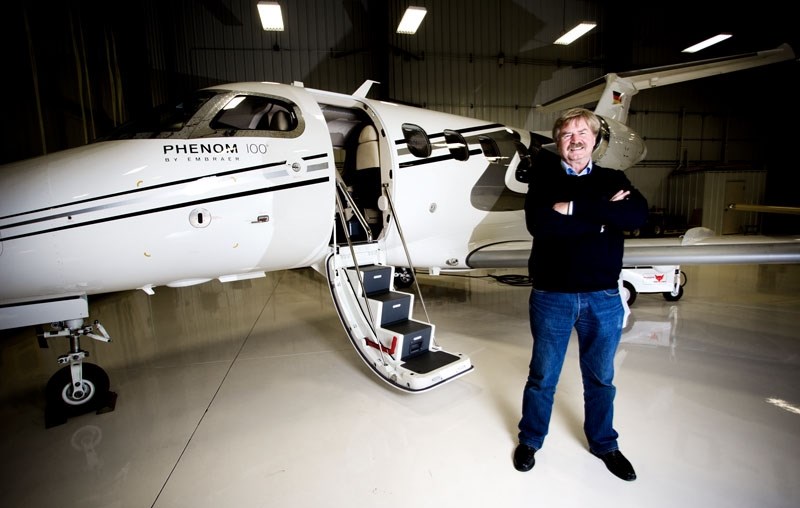 German businessman Hans Bruening stands with his Embraer Phenom 100 jet in the Villeneuve Aviation Centre hangar Feb. 25. Bruening says he prefers flying into smaller airports as opposed to large centres and chose Villeneuve on his recent trip to the Edmonton area.

The Villeneuve Aviation Centre had an unexpected visitor Wednesday.

Hans Bruening, a German pilot and businessman, arrived from Manitoba and was looking for a place to park his private business jet for a few days, while he scouted out potential organic cafĂ© locations and paid a visit to his uncle in Edmonton.

“I was taking the gas refuelling truck to fill a small Cessna 172 at Centennial Flight Centre and he flagged me down and said ‘Where can I park?’” said operations manager Evan Rose, who works out of the Villeneuve Airport.

He was surprised by the arrival, saying that most international business flights choose to arrive through the Edmonton International Airport.

“It was a bit different when we saw this thing,” said Rose, who used to work at the Edmonton City Centre Airport before it closed in 2013. “We would deal with these kind of aircraft all the time. But this one is unique in that it’s of German registration.”

Attracting international charter flights, especially from the U.S., is one of the airport’s goals and the main driver behind lobbying the federal government for access to customs services.

The airport received CANPASS status in March 2015. The revised status allows pilots of smaller aircraft – 15 passengers or fewer – to clear customs in Villeneuve rather than the Edmonton International airport.

It was Bruening’s first time flying his private jet, a Phenom 100, to Edmonton. Usually he buys a ticket on a passenger flight, but when he discovered that a general aviation airport existed in the area he decided to continue his trip from England and Iceland to Canada.

He said he prefers the service at smaller airports and the fact that they are not as busy and crowded.

“This is comparable to Europe. In Europe it’s very common that you use the smaller airports for business jets,” said Bruening, explaining that the continent has really separated general aviation from scheduled flights.

Bruening said he would certainly fly to Villeneuve again if his real estate company, Avia Mobil, decides to do business here. “It’s a shame that more people aren’t coming here,” he said.

He did have one criticism though. He said the airport needs to better market its available services. He had difficulty confirming that the airport had all the services he needed – refuelling, maintenance, customs, etc.

And when he landed he was told by the control tower to park in a public maximum eight-hour space. It wasn’t until he met Rose that he was able to find a place to park his jet for a few days.

Mark Hyderman, owner of Villeneuve Aviation Centre, agrees. He said the airport authority does a great job of promoting what it strives for, but doesn’t spend enough time emphasizing what Villeneuve can do right now.

Hosted under the Edmonton International Airport’s website, the Villeneuve page prominently features the role and economic impact of the general aviation airport; operation details of individual businesses are buried in the business directory link.

The only useful information for pilots displayed on the main page is the NAV Canada air traffic control tower business hours.

“We want people to know we’re doing it now,” said Hyderman. “We need to raise awareness for pilots – not only in Alberta, B.C., Saskatchewan and Manitoba, but Germany too.”