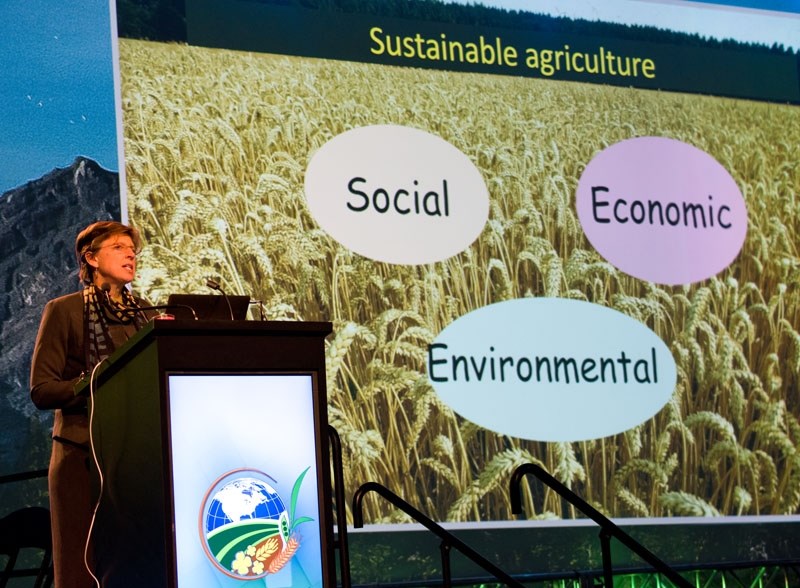 University of California, Davis, plant pathology professor Pamela Ronald spoke to thousands of farmers and food scientists on Feb. 2 at the 2017 FarmTech conference at the Edmonton Expo Centre.

Ronald is a renowned researcher into rice genetics and was named one of Scientific American's most influential people in biotechnology in 2015. She is widely recognized for her efforts to explain the science of organic farming and genetic engineering, and has won many awards.

Many people have concerns about the safety of genetically modified foods, Ronald said, which she blamed in part on inaccuracies promoted by celebrities. Yet in the 40 years that modern genetic engineering has been in use, there has yet to be any case of a modified crop causing harm to human health or the environment.

"Science is not a belief system. My opinion doesn't matter. We really need to look at the evidence."

She encouraged the crowd to talk to people about the science behind food and push back against the "post-truth" world that's emerging.

"We need to celebrate scientific process and use it to enhance food security and safeguard the environment."

Virtually everything we eat today came from seeds produced through genetic engineering, whether selective breeding or direct gene manipulation, Ronald said. Those techniques help produce better tasting or nutritious food, and can also make it more sustainable, reducing a crop's environmental impact or increasing its hardiness.

Hawaii's papayas were being decimated by a virus in the 1950s until researchers spliced DNA from that virus into them in, Ronald said. Those papayas now produce 20 times more yield than ones without that modification, and make up about 90 per cent of the papayas on the market, she said. They also contain about 10 times less of the virus's DNA than an organic one that has the disease.

Genetic engineering can also reduce pesticide use, she continued. In Bangladesh, farmers often have to spray herbicides twice a day on their eggplants to protect them, putting kids at great risk of exposure. Last year, researchers tested eggplants engineered to produce the pesticide "Bt" (which is used in organic crop production) in this region and found that it enabled some farmers to stop spraying altogether.

It's a similar story with herbicide-resistant canola, said Rick Taillieu of the Alberta Canola Producers Commission.

"By using genetic engineering, we've been able to go to direct seeding or zero-till farming," he said, which reduces pesticide use and soil erosion.

"It's an environmental win."

Ronald said her lab has developed rice plants that are more flood-resistant, which will be important as the world experiences more floods due to climate change. Some five million farmers used these plants last year, enabling them to produce up to five times more rice.

Today's hot new genetic technique is CRISPR, which lets researchers snip DNA in hopes of triggering a beneficial mutation in a specific gene. It's already been used to make button mushrooms that resist browning and hornless dairy cows.

"This approach has the potential to improve the welfare of millions of cows every year," she said, as these cows currently have to go through the trauma of having their horns sawn off.

But there are ethical questions as well, Ronald said. There's great debate in the U.S. right now on whether or not to edit malaria or Zika virus transmission out of mosquitoes, for example, and ongoing opposition to the release of vitamin-enriched golden rice, which could help save thousands of kids a year from malnutrition.

Taillieu encouraged farmers to share their knowledge of the positive impacts of genetic engineering with others.