Sandra Fisher grew up playing golf – literally – raised in the clubhouse/home that sat on the 18th hole of the Sturgeon Valley Golf & Country Club grounds where her dad was an assistant pro. She just earned her 25th title at the SVGCC's annual championships.
Aug 2, 2020 8:00 AM By: Lucy Haines 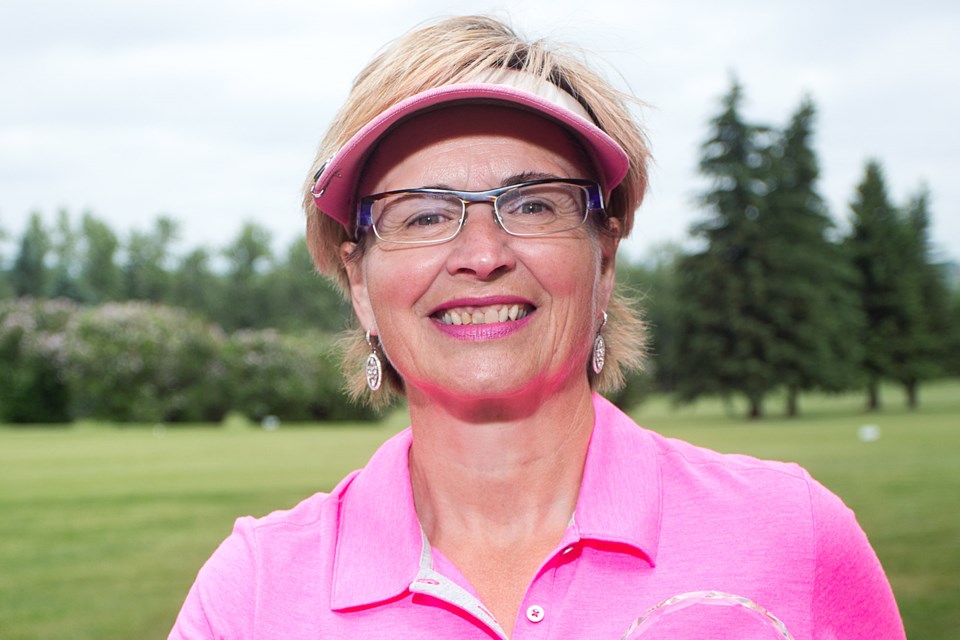 You might think taking the Sturgeon Valley Golf & Country Club's (SVGCC) championship title for the 25th time would be old hat, but Ladies winner Sandra Fisher still gets nervous in the moment.

"I was 81 (strokes) on the first day and the second player was 84, so I thought, 'You have to pull up your socks,'" said Fisher of her historic win, the most of any competitor in the club's 60-year history. "But I didn't calm down the second day either. My hand was shaking when I was putting, and I said to myself, 'What are you doing? Just play.'"

And that's just what she did. In the Ladies division, Fisher followed her day-one score of 81 with a solid 77, retaining her title of club champion. Jordie Richardson finished 13 strokes back with a two-day total of 171. On the previous weekend, the senior Ladies winner was Marg Lacroix with a score of 178 and the Ladies Super Senior was won by Ellen Hodgins with a score of 183.

SVGCC general manager Mark Beckwith said while no one should assume Fisher will take the title during any championship weekend, "she's definitely the favourite. Sandra is consistent – a championship-quality player," he said.

Fisher grew up playing golf – literally – raised in the clubhouse/home that sat on the 18th hole of the SVGCC grounds where her dad was an assistant pro. (The home has since become a tea house in Namao). When she was just a preteen, Fisher and her siblings would routinely run onto the course to play golf after school.

"I didn't take many lessons – mostly just hit the ball. Dad showed us the basics of the game, though," she said. "We all still play, and I even met my husband on the golf course. My three boys play, too, but I'm the only one who plays regularly – three or four mornings a week, from May to October," she said.

Those three-and-a-half-hour, 18-hole games with friends serves the 58 year-old well, though a hip replacement a few years ago means she now uses a cart to get around the course, and wears a special boot inside her runner "so I don't trip over my toes."

But the nearly half-century-long SVGCC member said playing never gets old. "Mostly it's just fun, playing with friends or my husband: sometimes they win, sometimes they lose," she laughed. "But, I still have a goal to shoot 69. I was 70 this year, so I'll go on pushing myself in competition to play better than the game before. I'll keep at it until I can't golf any more."

The warm and sunny championship weekend (July 24 to 26) provided perfect conditions for scoring on the SVGCC course, a challenging one that comes with plenty of water and sand features, Beckwith noted.

"Even though it's been an unusual year, with COVID-19 guidelines and protocols, there was no concern about having the championships. We had a great participation rate of 122 players in the male, female, juniors and senior categories. We weren't sure we'd be golfing at all this year, but we opened when we regularly would have in early May, and people have been steady in coming out."

Highlights of the late July weekend included a win for Brody Eggleton in the men's championship, who – like most of the field – had some difficulty on the front nine but steadied himself on the back nine to have a three-day total of three under par 213. Eggleton's opening round was 69-67. Dean Misner had another steady round of 76, and first-round leader Marcus Kostick shot a 77 to finish tied for second at 224. On July 11 and 12, Dean Misner captured the Sr. Mens title, while Dale Chervinski took the Super Senior (age 65-plus) win.

"Brody is just 19 – the new men's champ. He played fine golf over the weekend and had a 10- or 11-shot lead going into the final round," Beckwith said. "It would've been hard to catch him. I know he's thrilled to take his first club championship."

In the Junior Boys division, defending champion Evan Matty continued his solid play with a one under par 71 on Sunday and a two-day total of eight under par 136. Matty's three-peat win was followed by Theo Leakos in second with a two-day total of one over par 145, and Talin Thera in third at 146.

Results for Ladies, Junior Boys and Men's Flights 2-5 are at sturgeonvalleygolfclub.com